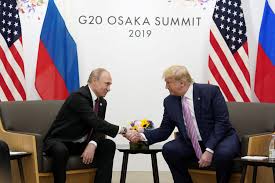 BY MORGAN CHALFANT AND REBECCA KHEEL , The Hill–

The Open Skies Treaty allows the pact’s 35 signatories, including the United States and Russia, to fly unarmed observation flights over each other with the intention of providing transparency about military activities to avoid miscalculations that could lead to war.

Trump told reporters at the White House that Washington and Moscow could reach a new agreement following the U.S. withdrawal.

“I think we have a very good relationship with Russia, but Russia didn’t adhere to the treaty,” Trump told reporters before departing for a trip to Michigan. “So, until they adhere, we will pull out.”

“But there’s a very good chance we’ll make a new agreement or do something to put that agreement back together,” the president continued. “I think what’s going to happen is, we’re going to pull out and they’re going to come back and want to make a deal. We’ve had a very good relationship, lately, with Russia.”

Secretary of State Mike Pompeo said the United States will formally submit its notice of intent to withdraw from the agreement on Friday.

“Effective six months from tomorrow, the United States will no longer be a party to the treaty,” Pompeo said in a statement. “We may, however, reconsider our withdrawal should Russia return to full compliance with the treaty.”

The treaty, which went into force in 2002, has long been in the crosshairs of defense hawks, who argue Russian violations give Moscow an unfair advantage over Washington.

“President Trump has made clear that the United States will not remain a party to international agreements that are being violated by the other parties and are no longer in America’s interests,” National Security Adviser Robert O’Brien said in a statement later Thursday that did not explicitly address the president’s plans.

O’Brien referenced the Intermediate-range Nuclear Forces (INF) Treaty and the Joint Comprehensive Plan of Action (JCPOA), both of which Trump has withdrawn the United States from.

Russia in the past has restricted flights over Kaliningrad and areas near its border with the Georgian regions of South Ossetia and Abkhazia.

Because of those restrictions, an April report from the State Department said “the United States continued to assess that Russia was in violation of the Treaty on Open Skies” in 2019, a determination first made in 2017.

In addition to accusing Russia of “flagrantly and continuously” violating the agreement with flight restrictions, Pompeo on Thursday accused Moscow of using imagery from the flights to target critical infrastructure in the United States and Europe. That would not violate the accord, but Pompeo argued it “fatally undermined the very intent of the treaty as a confidence- and trust-building measure.”

Pressed on a call with reporters for an example of Russia using imagery like that, Chris Ford, assistant secretary of State for international security and nonproliferation, said he was “not at liberty to go into some of the details of why we think that this is a concern.”

“We understand that many of our allies and partners in Europe still find value in the treaty, and we are grateful for the thoughtful feedback they have offered us during the course of our review of these questions,” Pompeo added, saying the United States likely would have already withdrawn “if not for the value they place” on the pact.

“We are not willing, however, to perpetuate the treaty’s current problems of Russian-engendered threat and distrust simply in order to maintain an empty façade of cooperation with Moscow,” he said.

Sen. Tom Cotton (R-Ark.), a member of the Senate Armed Services Committee and a vocal critic of the treaty, has urged Trump to withdraw from it and divert funds spent on the treaty to other military projects over Russia’s abuse of the pact. Cotton lauded Trump’s decision in a statement Thursday in response to reports disclosing the plans.

“The Open Skies Treaty started life as a good-faith agreement between major powers and died an asset of Russian intelligence. For Mr. Putin, the treaty was just another scheme to snatch a military and surveillance advantage over the U.S. and NATO,” Cotton said.

Meanwhile, Sen. Jeanne Shaheen (D-N.H.), another Armed Services member, criticized the move as a “dangerous and misguided decision” that “cripples our ability to conduct aerial surveillance of Russia, while allowing Russian reconnaissance flights over U.S. bases in Europe to continue.”

Trump’s impending move to withdraw from the treaty has been rumored for months. In October, a quartet of top Democrats in Congress wrote a letter to Defense Secretary Mark Esper and Pompeo urging against withdrawal.

Last month, the same group of lawmakers released a statement warning Trump could use the cover of the coronavirus pandemic to withdraw from the accord with little attention, saying such a move “in the midst of a global health crisis is not only shortsighted, but also unconscionable.”

At the time, congressional aides told The Hill the statement was prompted by Esper and Pompeo agreeing to move forward with a withdrawal despite two planned National Security Council meetings on the issue being canceled in February and March.

A provision in the annual defense policy bill signed into law in December requires that the administration notify Congress at least 120 days before it officially submits an intent to withdraw to the other treaty members. Under the process laid out in the treaty, a formal notice of intent kicks off a six-month period before the withdrawal is final.

In a statement Thursday, Smith and Rep. Jim Cooper (D-Tenn.), chairman of the strategic forces subcommittee, indicated Congress did not get the required notification, saying Trump’s decision “is in blatant violation of the law.”

“Not only does the FY20 National Defense Authorization Act require a minimum 120-days’ notification of the withdrawal notice, but also multiple communications from the House Armed Services Committee and other congressional chairmen have gone unanswered,” Smith and Cooper said.

“The Trump administration continues to give Russia the upper hand with regards to arms control, which leaves our allies and deployed forces less protected in Europe,” they added, calling the withdrawal a “a slap in the face to our allies in Europe.”

The treaty has some Republican support, too, particularly from lawmakers representing Nebraska, where the military planes used to conduct the treaty flights are based.

“Open Skies remains our only ability to get direct access to Russian airfields and airspace, and every experienced operational commander knows all too well that satellites simply can’t do it all,” Rep. Don Bacon (R-Neb.) told The Hill in an April statement.

Supporters of the treaty argue it is an invaluable tool for the United States to support its allies, saying U.S. partners without sophisticated spy satellites benefit from the unclassified imagery.

The flights have also been used to signal U.S. resolve toward its allies and partners, including flights over Ukraine following Russia’s seizure of naval ships in 2018 and invasion of Crimea in 2014.

The decision by Trump to withdraw from the treaty follows last year’s withdrawal from the Intermediate-range Nuclear Forces Treaty, a decades-old Cold War arms control pact with Russia, over Moscow’s violations.

The latest move is likely to raise questions about Trump’s plans for New START, the last remaining arms control pact with Russia that is up for renewal in February.