Skip to content
Home » U.S. Politics » One of the Failures of the Affordable Care Act
Previous Next

One of the Failures of the Affordable Care Act

No piece of legislation passed by Congress in the past seventy five years has been as controversial as the Affordable Care Act, commonly known as Obamacare. Again for the third presidential election in a row the ACA will be a top issue with both Democrats and Republicans either hailing this landmark legislation or lauding its passage.

Even during the contentious confirmation hearing for Supreme Court nominee Amy Coney Barrett, the ACA was the key component with Senate Democrats fearing if confirmed she would be one of the deciding justices to do away this health care legislation when a case will be heard before the court in November.

The passage of the ACA in 2010, was supposed to accomplish three main objectives; (1) to reform the private insurance market—especially for individuals and small-group purchasers, (2) to expand Medicaid to the working poor with income up to 133% of the federal poverty level, and (3) to change the way that medical decisions are made.

Far too often the debate has been extremely partisan when it comes to discussing the ACA, but reality needs to set in that those supporting the ACA need to recognize the extreme flaws in the healthcare law which never lived up to its lofty expectations of reducing healthcare costs.

One of the central tenets of the ACA was the reduction in cost, but instead it had a reverse effect. The fundamental flaw which was imbedded into the healthcare the law by the insurance industry failed to control instead had a reverse effect by substantially increasing costs.

With the passage of the Affordable Care Act the healthcare ecosystem became corrupted. This biggest corruption of the ACA was having the insurance industry write most of the new healthcare law and with it the industry placed incentives that only benefited the insurance carriers with excessive profits.

The prime motive of the insurance industry is to maximize wealth for shareholders.

The ACA requires that 85% of the premiums collected by insurance carriers must pay for the cost of care. The remaining 15% is left for profit and administrative costs for the carrier. This is known as the Medical Loss Ratio (MLR).

When healthcare costs go up the insurance industry profits rise as well, so there is no incentive for the insurance carriers to reduce costs.

Like everything what works in theory has disastrous results in practice and the ACA law is one such example. With its passage the insurance industry in their efforts to maximize profits acquired large segments of the healthcare supply chain.

As long as the insurance industry maintains its 15% profit margin they are in compliance with the ACA, but there is no incentives to keep costs low as that hurts there bottom line.

Aetna is owned by CVS.

CVS owns the Minute Clinic – one of the largest privately owned physician group in the country.

CVS owns CareMark also known as Health Payor Solutions. This is a pharmacy benefit manager or PBM. A PBM creates the prescription drug formulary for a health plan.  They also set the pricing for the prescriptions, both what the employer pays for the medications and what the member pays. 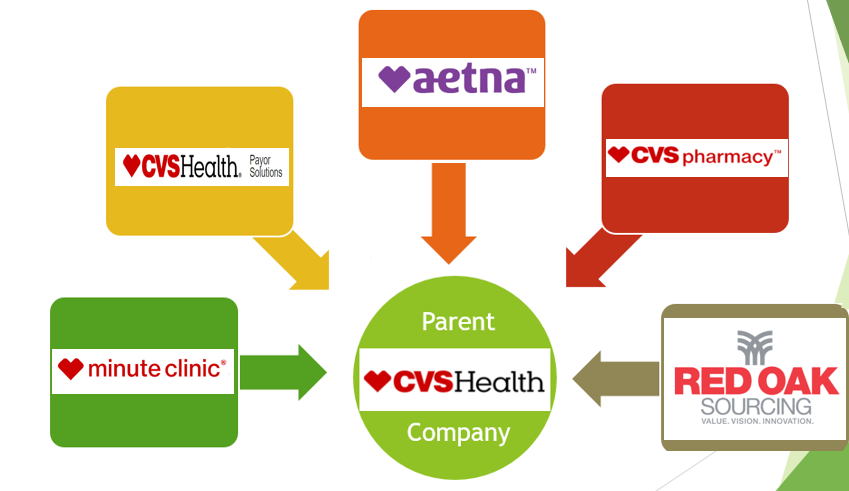 This model has been replicated by each major insurance carrier in the United States.  A similar diagram can be drawn using:

Given that all the carriers have done this, there is no incentive to keep costs down.  If CVS has the Minute Clinic raise their prices for doctor visits, the Minute Clinic makes more money at that level so does Aetna, because of the MLR, and so does the parent company, CVS.

The chart below shows the stock prices of the insurance carriers over the past 10 years.  You can see how well they have done.  United Health Group, the owner of United Healthcare, is up 2,940% since 2010 when the ACA was passed. 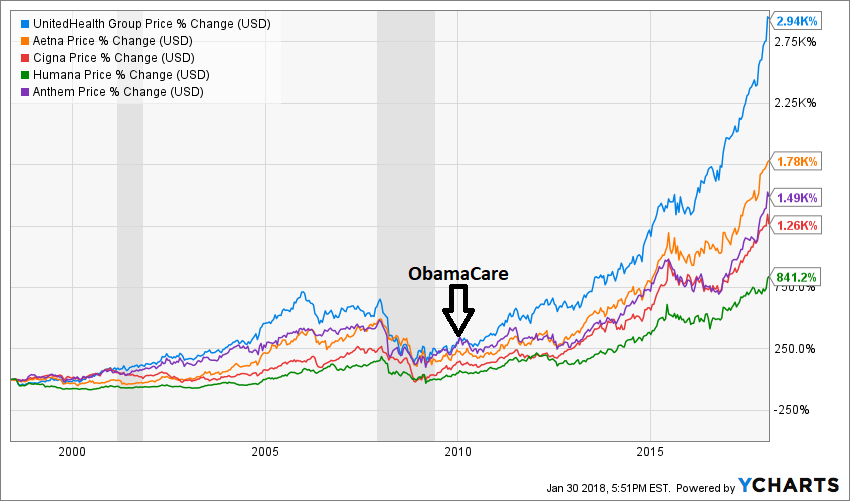 This flaw in the Affordable Care act also extends to prescription drug industry is dominated by the insurance industry.  With the passage of the ACA four pharmacy companies control around 80% pharmaceutical distribution in the United States.  The four companies are:

Express Scripts is owned by Cigna.

Because the four companies control 80% of the distribution, they also control the price of prescription drugs in the country.

The old saying barre’s true, at times the worst decisions are made with the best intentions, and with the Affordable Care Act partisan politics was made to appease ones base and sever unintended consequences followed.

No one wants to admit it, but the foundation of the Affordable Care Act is structurally broken and no matter of fixing will resolve this fundamental problem.