Skip to content
Home » U.S. Politics » The final debate: Five things to look for as Trump and Biden clash for last time
Previous Next

The final debate: Five things to look for as Trump and Biden clash for last time 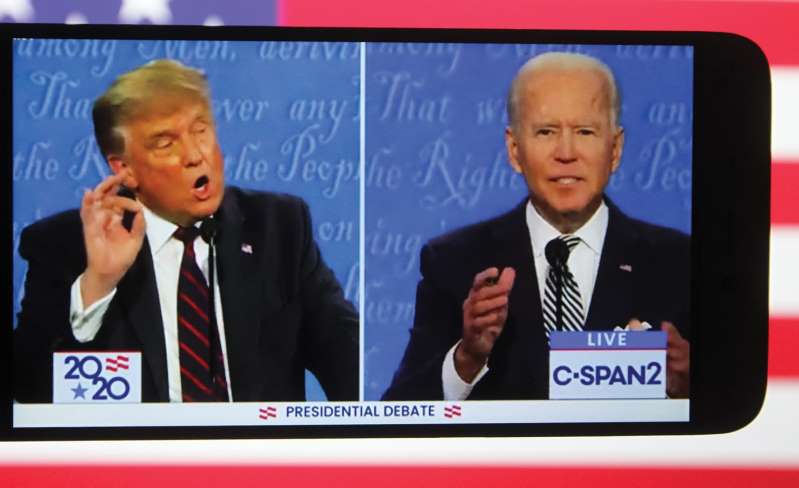 The two candidates could not have chosen more different preparation strategies. While Democratic nominee Joe Biden has locked himself away at his Delaware home before the final debate in Nashville, Tennessee, on Thursday, President Trump is out on the campaign trail, complaining that the rules and the moderator are stacked against him.

Trump has ground to make up — he currently lags Biden by 8.6 percentage points in the RealClearPolitics average of national opinion polls — while the Democratic challenger will simply be hoping to get through the night safely without raising fresh concerns about his age or health.

Here’s what to look out for on the night:

Trump and his supporters have been desperate to drag Biden’s troubled son into the campaign, asking, “Where’s Hunter?” for months. Now, the president has an opportunity.

Last week, the New York Post published details of emails and photos apparently taken from a laptop used by Hunter, alleging that his father had knowledge of his overseas business dealings and may even have had a financial stake, according to some reports. Joe Biden dismissed the lurid claims as a “smear.” Other news organizations have been refused access to the files and have steered clear of the story.

Trump will have 90 minutes to repeat the allegations in front of a prime-time audience and is expected to spend ample time doing so.

The first debate was less of a debate than a festival of cross-talk, with both candidates speaking over the other. Trump was by far the worst offender as he deployed a tactic insiders said was designed to put Biden off his stride.

Organizers took note. On Monday, the debate commission announced it would mute one candidate’s microphone to ensure that the other would get two minutes of uninterrupted talk time at the start of each topic area.

Trump aides see a potential win in this. The longer Biden has to outline his vision, they reason, the more voters will be deterred by his leftist plans and the more likely he is to ramble. But what does Trump do? Does he have the policy chops to use his own time effectively?

The Trump campaign has complained to the commission about the policy areas selected for the debate — fighting COVID-19, race in America, climate change, American families, national security, leadership. It says it was promised foreign policy would be the theme.

No wonder it complained. Aides think facing down Kim Jong Un, killing the leader of ISIS, and withdrawing from the Iran nuclear deal show Trump as a man of action, compared with an opponent, who, as part of the Obama administration, helped bog down America in endless wars and who was less than enthusiastic about greenlighting the operation to kill Osama bin Laden.

Trump allies have an answer. The president needs to pivot away from the question asked in order to address the question Trump wants to answer. That means taking the debate away from the coronavirus and climate change to trumpeting foreign policy wins wherever possible.

Moderating a presidential debate should be the pinnacle of any career. Now, it comes with smears and warnings.

Chris Wallace of Fox News found himself under intense scrutiny during the first debate when he failed to keep control and struggled even to make his voice heard.

NBC News White House correspondent Kristen Welker is in the hot seat on Thursday. At the age of 44, she is the least experienced of the three moderators chosen for the 2020 debates.

Trump aides initially welcomed her appointment, but supporters have since accused her of being anti-Trump after the New York Post published details of her parents’ political donations.

Last weekend, the president joined in, tweeting that Welker had always “been terrible and unfair, just like most of the Fake News reporters.”

If hosting a debate was not pressure enough, now moderators must cope with psychological games and hit pieces before they even take the chair.

Does it even matter?

History shows that the first debate is the most watched and the most consequential. With less than two weeks to Election Day, how many people have already made up their minds?

That is even more true of the 2020 election. More than 30 million votes have already been cast, potentially further reducing the impact of debate performance.

Original Location: The final debate: Five things to look for as Trump and Biden clash for last time