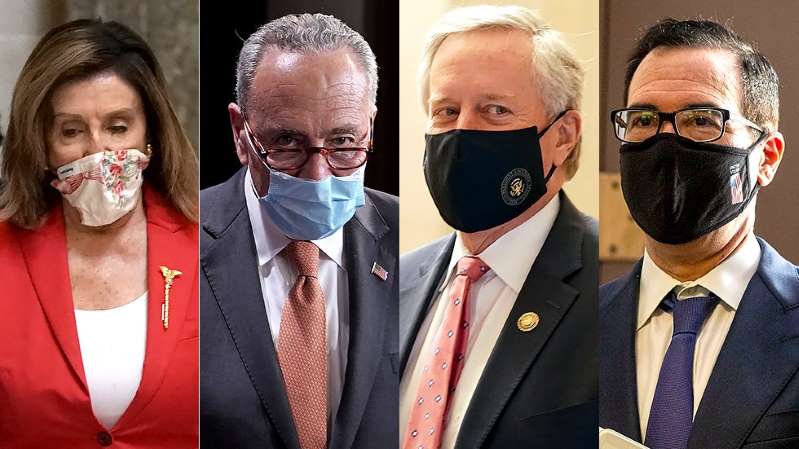 By Jordain Carney, The Hill–

Congress is barreling toward a showdown over federal unemployment benefits, with millions of Americans hanging in the balance.

As part of the March $2.2 trillion coronavirus bill, Congress agreed to a $600-per week plus-up of unemployment benefits, but those are set to start expiring in a matter of days.

What to replace it with is shaping up to be a clash as lawmakers and the White House prepare to negotiate the fifth coronavirus bill.

“What’s going to happen on Saturday, all the pain, all the suffering … did not have to happen,” Sen. Ron Wyden (Ore.), the top Democrat on the Finance Committee, said of the looming deadline.

The statistics are stark: 1.4 million Americans applied for unemployment insurance last week, according to Department of Labor data released Thursday, the first increase since March. Roughly 32 million Americans are unemployed and the national jobless rate is just above 11 percent.

But a lapse of the current federal benefit appears unavoidable.

Both the White House and House Speaker Nancy Pelosi (D-Calif.) say they want a deal by the end of next week, when the benefits drafted as part of the March bill will expire. But Congress is all but guaranteed to not meet that deadline; Republicans won’t unveil their coronavirus proposal until early next week and bipartisan negotiations on the next package are largely non-existent.

Even if Congress somehow managed that herculean task they are likely already out of time to prevent a lapse: Because the end of the month falls on a Friday, states would need an extension before July 25 or July 26 to fully cover the last week of July, which spills into August.

And the two sides remain far apart about what to replace the $600 per week plus-up with, underscoring the difficulty in getting a quick agreement.

Treasury Secretary Steven Mnuchin told reporters that the forthcoming Republican proposal -which was expected to be released Thursday but slipped to Monday – will provide a roughly 70 percent wage replacement compared to what an individual was making before they were laid off through the end of the year.

Republicans have vowed to end the flat $600 per week addition, but have struggled to figure out how to replace it, with some wanting to scale it down and others wanting to eliminate it. Others suggested tying it to an individual’s wages.

“We … intend to continue some temporary federal supplement to unemployment insurance, while fixing the obvious craziness of paying people more to remain out of the workforce,” said Senate Majority Leader Mitch McConnell (R-Ky.) about what Republicans will propose.

But it’s unclear if state offices would be able to quickly implement a plan like the one being offered by Republicans. States already struggled to implement the $600 plus-up included in the March bill, with some states reporting long delays to dispense unemployment benefits.

Wyden, who negotiated the $600-per-week plus-up in March, said based on talks with the Labor Department, state unemployment offices will not be able to carry out the GOP plan.

“Impossible. Bronze Age technology. …Everything that they have talked about so far, based on Secretary Scalia’s comments, can’t be administered, okay?” Wyden said.

Mnuchin countered that Treasury has been working through the “mechanical” issues including reaching out to states, acknowledging that “some states can implement this quickly, some states will take time.”

In the worst-case scenario, he added that he was working a back-up plan, but did not provide details.

Democrats are proposing extending the $600-per-week benefit through the end of the year.

“I’m all for $600 because people really need it. …I go to the table with the commitment to the $600,” House Speaker Nancy Pelosi (D-Calif.) told reporters on Thursday.

The White House is already signaling that if Congress is not able to get a deal on a larger coronavirus package by the end of the next, they think lawmakers should pass unemployment, potentially paired with school funding and liability protections on their own. That strategy would result in multiple packages instead of a bipartisan deal on one large relief package.

“Unemployment insurance ends the end of next week. We’re going to be ready to make sure that that those unemployed Americans still have assistance,” White House chief of staff Mark Meadows told reporters. “I don’t imagine that our Democrats across the aisle would want to stand in the way of helping those unemployed Americans receive benefits. …Those deadlines as you well know on Capitol Hill always work magic in the 11th hour.”

Mnuchin told reporters that they want a deal on everything, but “if we can’t do everything the priority is, we need to address UI, and schools and liability quickly.”

But Democrats quickly rejected that idea.

“This is a package. We cannot piecemeal this,” Pelosi said.

Senate Minority Leader Charles Schumer (D-N.Y.) added that Democrats weren’t willing to “take care of one portion of suffering people and leave everyone else hanging.”

And some Republicans are rejecting breaking off parts of the coronavirus proposal, signaling they want it to all move together with August 7, when the Senate is currently scheduled to leave for a four-week break, viewed as the deadline.

“I think it’s way premature to talk about that,” said Sen. John Cornyn (R-Texas). “I wouldn’t be for breaking it up into little pieces; I think that would just make things worse.”