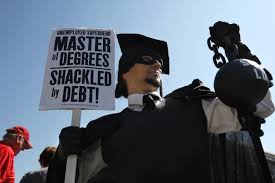 Washington continues to struggle in resolving the skyrocketing student loan debt which many are predicting as the next financial crisis to hit the country.

Last month, the Portland Tribune reported, that skyrocketing tuition at public and private colleges has forced more than half of all students throughout the nation to take out loans.  This year, the total amount of student loan debt crossed over the $1 trillion mark, as reported by the Federal Reserve Bank.

In the same article, the tribune, continued, that’s because kids who leave school with a big loan to pay back could face financial hardship that may prevent them from buying houses, saving for retirement or even moving out of their parents’ basements.

In a recent article by the Wall Street Journal, students are putting off buying cars, or having a family because of their debt burden.  This ongoing crisis will only hamper the U.S. economy from growing out of its current stagnation.

On Saturday the president addressed this very issue.  “Over the past three decades, the average tuition at a public four-year college has more than tripled.  The average undergraduate student who borrows for college now graduates owing almost $30,000. And I’ve heard from too many young people who are frustrated that they’ve done everything they were supposed to do – and now they’re paying the price.”

The president continued by commenting, “I’ve taken action on my own to offer millions of students the opportunity to cap their monthly student loan payments to 10% of their income.  But Congress needs to do its part. The good news is that Senate Democrats are working on a bill that would help more young people save money.  Just like you can refinance your mortgage at a lower interest rate, this bill would let you refinance your student loans.  And we’d pay for it by closing loopholes that allow some millionaires to pay a lower tax rate than the middle class.”

Sen. Marco Rubio (R-Fla.) and Rep. Tom Petri (R-Wis.) writing a commentary in CNBC, have offered that it would be better to have each borrower’s payments set automatically as an affordable percentage of income.  For most, this would mean paying less early in their careers and more as their income grows over time. Additionally, borrowers would be protected from income shocks such as unemployment, something many recent graduates have struggled with during the economic downturn.

Continuing, both lawmakers have also stressed we must attack the burden of debt directly by improving the quality of higher education while lowering its cost.

It’s important to address the student loan crisis, but the real issue is the spiraling cost of college and other educational level schooling.

Republican’s tend to focus on the crisis of student loans as a systematic problem, but really haven’t addressed the real cause of rising cost of college and university education.

Throughout the nation, one only has to look at the salaries of administrators and support personnel.

An example of this is former U.S. Department of Homeland Security Janet Napolitano being hired in July 2013 as the 20th president of the University of California educational system.

As president of the UC system she will receive a base salary of $570,000, an auto allowance of $8,916, plus a one-time relocation fee of $142,000.  Currently we have a trillion dollar student loan catastrophe, students graduating on average of $25-$30,000 in student loan debt with minimal employment prospects, further impeding economic growth in the country.

This may be a drop in the bucket in educational funding, but we have seen vast increase in university administration costs, all placed on the backs of students to secure even more student loan debt.  Has anyone asked why college tuition rises far faster than inflation?

This needs to be addressed, and both parties only issue solutions that cater to the base of their party without ever solving the real problem.

Students and their parents need to challenge both political parties and ask, why does education cost so much?