Skip to content
Home » Economy » Unemployment Rate Remains at 6.3% as 217,000 jobs created in May
Previous Next 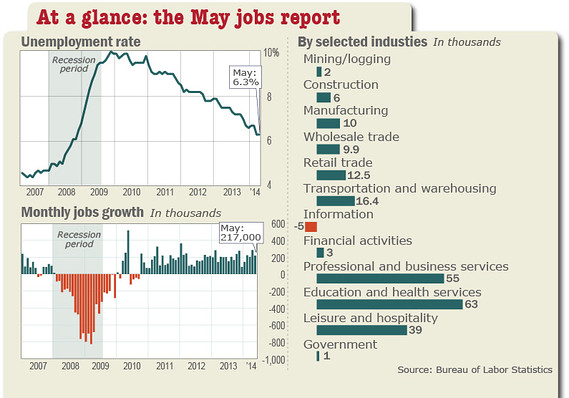 The unemployment report remained at 6.3%, slightly around where most economists had predicted it would be, but down from the 288,000 jobs that were created in April.

Continuing, the U.S. has now recovered all the jobs lost after the 2007-2009 downturn, but it took more than six years to surpass its prior peak of 138.25 million workers. Not since the Great Depression in the 1930s has it taken so long to recover all the jobs lost during a downturn.

Jason Furman, the chairman of the Council of Economic Advisors, said Friday that the labor force participation rate continues to be a challenge but that the White House is encouraged by what they consider “steady job growth.”

“We now have 51 straight months of jobs growth, 9.4 million jobs added by the private sector, we saw wages rise this past month,” Furman said on CNBC. “There’s definitely a lot more we need to do but this is the type of progress we’d like to be seeing in the economy.”

“Unfortunately, President Obama has given up on creating jobs,” Priebus said. “At least that’s the message he’s sending by opposing job-creating projects like the Keystone Pipeline and imposing job-killing regulations like his new restrictions on energy production.”

In Politico, the Commerce Department reporting, the Commerce Department said last week that U.S. gross domestic product shrank at a seasonally adjusted annual rate of 1 percent during the first quarter of this year, revised down from an initial estimate of 0.1 percent growth. While this was disappointing news, analysts attributed the downturn largely to unusually severe weather conditions that plagued many parts of the country this year and predicted an upswing in the coming months.

It will be interesting to watch what actions the Federal Reserve takes in relationship to May’s unemployment report.  Will the Federal Reserve continue its reduction of its quantitative easing program in which the Fed buys bonds and mortgage bonds to keep interests rates low hoping to spur economic growth.

To date the Federal Reserve’s quantitative easing program has pumped around $4 trillion dollars into the bond markets. On June 17-18, the Federal Open Market Committee will be looking to reduce the bond buyback program another $10 billion a month from $45 billion, after having peaked around $80 billion.

The job picture was not all that spectacular as a good portion of the news jobs were in the service sector, which often have a low level of pay.

The nation should get a better picture of the state of the U.S. economy at the end of summer when the economy will begin to feel the effects of the Affordable Care Act and the president’s new environmental regulations and its impact on the economy.

We will have to just wait and see.