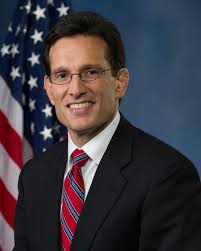 Cantor outspent his primary challenger, by spending $5 million to Brat’s partially sum of $122,000.

Both political parties will be dissecting this race to gain any political advantage, but so far the reports have that Cantor lost the race due in part to his stance on immigration.

Immigration was a factor but the not the lone and decisive factor in Brat’s upset win over Cantor.

“Cantor really did not lose because of immigration alone.  Immigration was the surface reason that galvanized the opposition to Cantor, but the opposition could not have been galvanized with this issue had Cantor been a better congressman these past few years.”

Erikson continues, “He and his staff have repeatedly antagonized conservatives.  One conservative recently told me that Cantor’s staff were the “biggest bunch of a**holes on the Hill.”

The fact remains is that Cantor’s arrogance and his desire to become Speaker of the House, should current Speaker John Boehner not seek re-election, step down or be replaced by House members then Cantor would vie for the job.

Cantor forgot one cardinal rule of politics, all elections are local.  You still have to take care of your constituents at home.

Erikson, continues, “Several of residents of Cantor’s district groused that they were going to support Brat because they did not think Cantor was doing his job as a Virginia congressman.  Others no longer trusted him.

Cantor and his staff both lost the trust of conservatives and constituents. They broke promises, made bad deals, and left many feeling very, very betrayed.

Much of it was because of Cantor’s hubris and the arrogance of his top staffers.  He could not be touched and he could not be defeated. He knew it and they knew it.”

If anything this race was more on the fact people are tired of the duplicity of Washington who are more concerned with themselves then they are on the lives of average Americans.

As we draw closer to the mid-term elections and prepare for the 2016 presidential election, both parties need to start addressing the concerns of voters.

Voters do not want more campaign rhetoric or slogans they want action by Washington and they are not getting it from both political parties.

There is a dark mood in the country and both Republicans and Democrats had better pay attention to voters, if not they do so at their peril.