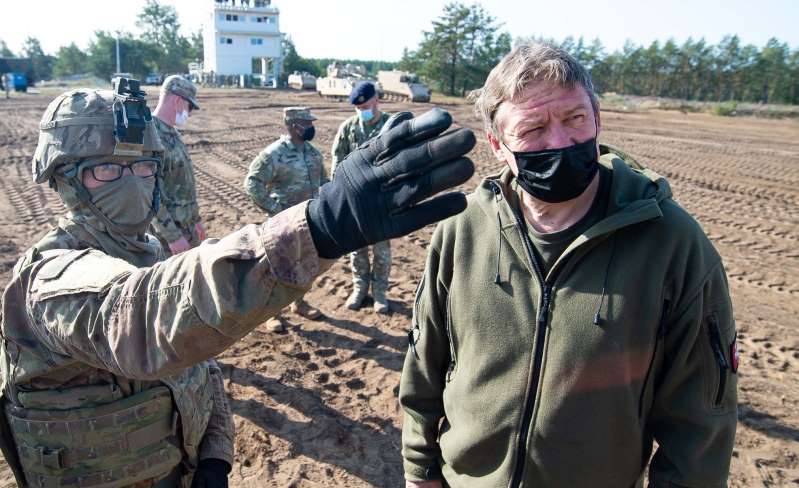 The U.S. decision to base an additional 1,000 troops in Poland is a boon for the tiny Baltic states whose NATO defense is insecure in the face of Russian aggression.

But even those troops could be easily cut off from reinforcing the Baltics, according to partner nations in the region.

“We very much like the support, the agreement between the United States and Poland,” Lithuanian Defense Minister Raimundas Karoblis told the Washington Examiner at a meeting in Vilnius, underscoring the command and control elements to be added.

The decision to add 1,000 U.S. troops to Poland was part of two defense agreements reached between President Trump and Polish President Andrzej Duda in the past two years. Poland already hosts 4,500 U.S. troops and is making infrastructure improvements that would provide a missile-defense position and stationing of the Army’s newly reestablished V Corps.

Polish General Staff Air Force Lieut. Col. Tomas Pietrus told the Washington Examiner that the positioning of troops in Poland is a deterrence to Russia in the east.

“If something is coming from the east, let’s say,” he said on the sidelines of the Tobruq Legacy air defense exercises at Siauliai Air Base in Lithuania. “We are on the eastern front of NATO. So, we need to be able to operate, to defend ourselves firstly, then the coalition.”

A major challenge, however, is the tiny land bridge known as the Suwalki Gap that connects Poland to Lithuania and that many defense experts say can be easily cut off by Russia in the event of a conflict.

“This is a challenge for everybody,” Pietrus admitted of the 65-mile land bridge between the Russian exclave of Kaliningrad and Belarus.

Security analyst Piotr Szymanski of the Warsaw-based Centre for Eastern Studies told the Washington Examiner that currently, NATO tries to assure the Baltic allies with Enhanced Forward Presence, multinational battle groups that integrate with local armies in the three Baltic States of Lithuania, Latvia, and Estonia.

“The whole idea about defending the Baltic States right now is that you have this tripwire,” Szymanski explained of the idea to integrate NATO-allied troops from Germany, the U.S., and elsewhere with Baltic soldiers.

“If there was a conflict, it would be hard for Russians to attack in a conventional way, in a way that goes around those troops,” he said of the program launched after the 2014 Russian invasion of Crimea.

Tobruq Legacy High Commander German Air Force Lt. Col. Thorsten Stratemann declined to tell the Washington Examiner if the challenge was a real concern for NATO, but he acknowledged that deterrence was the best strategy to prevent a Russian surprise invasion.

“I have the feeling and the fear, if we do not try to stop that by doing some kind of deterrence, they could get the idea, ‘Hey, we will be successful if we do this because they are not prepared,’” he said of a hypothetical Russian move to establish a land bridge from Belarus to Kaliningrad.

“If you look at the map, such a potential corridor would be along Vilnius, crossing Lithuania,” he added.

The Lithuanian defense minister emphasized that the U.S. troop presence in the region heightens deterrence, even if strategic gaps exist.

“The presence of U.S. troops, it’s doubling and tripling the deterrence factor, the signaling is very important,” said Karoblis. “Both for the deterrence and the defense factor.”