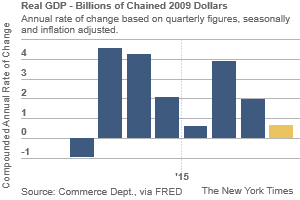 The American economy finished the year on a flat note, much as it started 2015, stoking concern about its vulnerability in the months ahead to turmoil in China and elsewhere in the global economy.

But most economists expect activity to rebound as the year unfolds and continue to grind out steady but hardly spectacular growth.

Over all, the economy expanded at an annual rate of just 0.7 percent in the fourth quarter of 2015, the Commerce Department said Friday.

It could have been worse: Ahead of the report, a few economists on Wall Street predicted that the economy might have contracted last quarter, while others forecast no growth.

As it turned out, the slowdown was brought on by anemic sales of durable goods like cars and appliances, a weaker trade picture caused by the stronger dollar and falling business investment and shrinking inventories. But consumer spending overall was healthy, and services held up better, underscoring how domestically driven sectors are faring much better than industries that depend on overseas demand.

“There is noise from quarter to quarter, but we’re still in that 2.5 percent growth environment,” said Scott Clemons, chief investment strategist at Brown Brothers Harriman.

“This year is going to look a lot like the past couple of years,” said Gus Faucher, senior economist at PNC Financial Services in Pittsburgh. “Growth in 2016 will be good but not great.”

He predicted that steady hiring and falling unemployment would prompt better wage gains than most Americans have seen so far in the six-and-a-half-year-old recovery.

“We will see workers getting more of the benefits from economic growth in 2016,” he said. “Together with rising wages, more hiring will allow consumers to continue to spend, and that will be more than enough to power through weakness from trade and the stronger dollar.”

Despite the lackluster numbers for gross domestic product, by other yardsticks the economy looks considerably healthier.

The unemployment rate now stands at 5 percent and most experts forecast that it will keep falling. Employers added an average of nearly 300,000 positions a month in October, November and December.

The real estate market, the principal investment asset for most American families, has held up well, despite the recent sell-off on Wall Street and turmoil in overseas markets.

And last month, the Federal Reserve raised short-term interest rates for the first time in nearly a decade, a sign that policy makers think the economy is strong enough to withstand a gradual tightening of monetary policy over the next couple of years.

On Wednesday, the Fed held off on another interest rate increase after a two-day meeting, but in a statement, officials indicated they would weigh another increase when policy makers next meet, in March.

While the muted report was not a surprise, it will most likely influence the way the Fed thinks about future rate increases, Mr. Clemons predicted.

“I think this takes another rate hike off the table for the first half of 2016,” he said. “The continued improvement in the labor market allows the Fed to think about raising rates, but the lack of inflation means they’re not required to act. They can have their cake and eat it, too.”

Other economists, though, are still looking for at least one rate increase during the first half of the year, possibly as early as March.

Friday’s report is the first of three estimates the Commerce Department will make for growth in gross domestic product, and as more data comes in, the figure could be revised. The next estimate will be released on Feb. 26.

In a separate report on Friday, the University of Michigan survey of consumer confidence showed a slight drop in sentiment from the initial estimate for January, but the outlook remained healthy by historical standards.

One headwind for the economy has been a slower accumulation of inventories, which reduced growth by nearly half a percentage point last quarter. After big increases in goods at warehouses and on store shelves lifted growth in the middle of the year, “there was some payback in the fourth quarter,” said Nariman Behravesh, chief economist at IHS, a research and consulting firm.

“That affects top-line growth but doesn’t really say so much about the fundamentals of the U.S. economy,” he added.

Looking ahead, Mr. Behravesh expects the economy to expand at a rate of about 2.5 percent in the first half of 2016, with the unemployment rate continuing to fall and companies delivering higher pay increases to help hold on to employees and attract new workers in a tighter labor market.

“I think it’s entirely possible we could see unemployment fall to 4.5 percent by the end of the year,” he said.

Still, expectations for the coming quarters have been drifting lower as weaker data for the fourth quarter of 2015 has accumulated in recent weeks.

Big business has been noticeably cautious to invest, despite healthy profits in many industries. The strong dollar and weakness in Asia and Europe have hurt many manufacturers, commodity producers and other exporters, especially in the Midwest.

At the same time, the plunge in oil prices has prompted drastic cuts in spending on energy exploration and production, creating another negative for business.

Steel companies and other manufacturers that supply metal pipe and other equipment to drillers have felt the chill as oil prices dived below $30 a barrel this month. Crude has rebounded slightly, and the American benchmark now stands at about $34 a barrel.

One mystery for economists has been why lower oil prices have not done more to stimulate more consumer spending.

One explanation is that Americans are saving a substantial portion of the windfall at the gas pump or using it to pay down debt, which ultimately benefits the economy even if it represents a drag in the short term.

Another possibility is that consumers remain skeptical about how long gasoline prices will stay below $2 a gallon on average, the lowest they have been since the depths of the financial crisis in late 2008.

“There are definitely problem areas,” Mr. Behravesh said, “but consumer spending, housing and the nonenergy parts of capital spending are still fairly solid.”