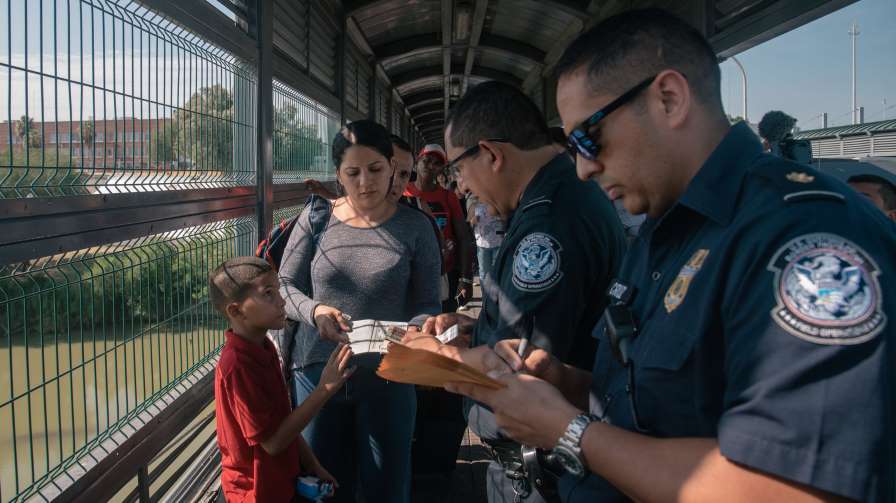 The Supreme Court on Wednesday allowed the Trump administration to bar most Central American migrants from seeking asylum in the United States, while the legal fight plays out in the courts.

The Supreme Court, in a brief, unsigned order, said the administration may enforce new rules that generally forbid asylum applications from migrants who have traveled through another country on their way to the United States without being denied asylum in that country.

The court’s order was a major victory for the administration, allowing it to enforce a policy that will achieve one of its central goals: effectively barring most migration across the nation’s southwestern border by Hondurans, Salvadorans, Guatemalans and others. Mexican migrants, who need not travel through another country to reach the United States, are not affected by the new policy.

It was the second time in recent months that the Supreme Court has allowed a major Trump administration immigration initiative to go forward. In July, the court allowed the administration to begin using $2.5 billion in Pentagon money for the construction of a barrier along the Mexican border. Last year, the court upheld President Trump’s ban on travel from several predominantly Muslim countries.

The rules reversed longstanding asylum policies that allowed people to seek haven no matter how they got to the United States. A federal appeals court had largely blocked the policy.

Lee Gelernt, a lawyer with the American Civil Liberties Union, which represents the challengers in the new case, stressed that the Supreme Court’s action was provisional. “This is just a temporary step,” he said, “and we’re hopeful we’ll prevail at the end of the day. The lives of thousands of families are at stake.”

The case will almost certainly return to the Supreme Court, but that will take many months.

“While congress continues to do nothing,” he wrote on Twitter, “@realDonaldTrump’s administration uses every tool in the toolbox to try and solve the crisis at our southern border.”

In a Supreme Court brief in the case, the solicitor general, Noel J. Francisco, said the new policy was needed to address “an unprecedented surge in the number of aliens who enter the country unlawfully across the southern border and, if apprehended, claim asylum and remain in the country while their claims are adjudicated.”

Under the policy, which was announced July 15, only immigrants who have been denied asylum in another country or who have been victims of “severe” human trafficking are permitted to apply in the United States. “The rule thus screens out asylum seekers who declined to request protection at the first opportunity,” Mr. Francisco wrote.

Migrants from Honduras, El Salvador and Guatemala have made up the vast majority of asylum seekers who have tried to enter the United States in record numbers this year. The Border Patrol has arrested 419,831 migrant family members from those three countries at the southwestern border so far this fiscal year, compared with just 4,312 Mexican family members.

The administration made the unilateral move after months of pushing Guatemala and Mexico to commit to going along with the plan. Mr. Trump went as far as to threaten both countries with tariffs unless they did more to halt the migration.

The administration struck such a deal with Guatemala in July that would force the country to absorb Central American migrants. But Guatemala’s Constitutional Court has ruled that it needs further approval, and the countries are still working on a plan to carry it out the deal.

The Mexican government has pushed back against the so-called safe-third-country agreement, which would force it to absorb asylum seekers from Guatemala.

Instead, Mexico deployed thousands of security personnel to its southern border and agreed to collaborate with the United States on a program that returns migrants to Mexico to wait out their cases.

Two federal trial judges had issued conflicting rulings on whether the new plan was lawful.

In July, Judge Timothy J. Kelly of the Federal District Court in Washington, who was appointed by Mr. Trump, refused to stop the administration’s rules.

That same day, Judge Jon S. Tigar of the Federal District Court in San Francisco, who was appointed by President Barack Obama, blocked them, saying they were put in place without following the required legal procedures.

“The rule the government promulgated,” she wrote, “topples decades of settled asylum practices and affects some of the most vulnerable people in the Western Hemisphere — without affording the public a chance to weigh in.”

The two other members of the court’s liberal wing, Justices Stephen G. Breyer and Elena Kagan, had dissented in earlier cases on Trump administration immigration policies. They did not note dissents from Wednesday’s order.

Judge Tigar ordered the administration to continue accepting applications from all otherwise eligible migrants, even if they had not sought asylum elsewhere on their journey north.

Judge Tigar said his ruling applied across the nation. Such nationwide injunctions have been the subject of much criticism, but the Supreme Court has never issued a definitive ruling on whether and when they are proper.

In August, the United States Court of Appeals for the Ninth Circuit, in San Francisco, narrowed the geographic scope of Judge Tigar’s more recent ruling while it considered the administration’s appeal, saying it should apply only in the territorial jurisdiction of the Ninth Circuit, which includes two border states, California and Arizona. (Two other border states, Texas and New Mexico, are in the jurisdictions of other federal appeals courts.)

On Monday, however, Judge Tigar again imposed a nationwide injunction, saying he had been presented with additional evidence justifying one. “Anything but a nationwide injunction,” he wrote, “will create major administrability issues.” On Tuesday, the Ninth Circuit temporarily blocked the new injunction and ordered the two sides to submit briefs on whether it should issue a stay.

In an emergency application to the Supreme Court last month seeking a stay of Judge Tigar’s initial ruling while the case moved forward, Mr. Francisco argued that the administration was entitled to skip ordinary notice and comment requirements for new regulations because foreign affairs were at issue and because a delay after the announcement of the procedures “may prompt an additional surge of asylum seekers.”

In any event, Mr. Francisco wrote, the Ninth Circuit’s narrower injunction, covering only the states in its jurisdiction, was still too broad. At most, he wrote, the injunction should cover only clients of the four groups challenging the new policy — East Bay Sanctuary Covenant, Al Otro Lado, Innovation Law Lab and Central American Resource Center in Los Angeles.

In response, the American Civil Liberties Union, which represents the groups along with the Center for Constitutional Rights and the Southern Poverty Law Center, said the administration was trying to rewrite a federal immigration law enacted in 1980. There was no reason, the A.C.L.U. said, to alter “the 40-year-long status quo while this case is heard on an expedited basis in the court of appeals.”

“The current ban would eliminate virtually all asylum at the southern border, even at ports of entry, for everyone except Mexicans (who do not need to transit through a third country to reach the United States),” the A.C.L.U.’s brief said. “The court should not permit such a tectonic change to U.S. asylum law.”