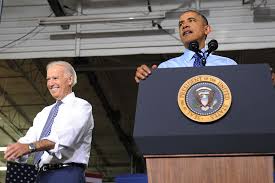 This week the President and Vice President traveled to the Community College of Allegheny County in Oakdale, PA, near Pittsburgh, touting job training at community colleges to help student secure jobs.

The president plans to use existing funds, in which his plan would call for offering $600 million in grants  “to support job-driven training, like apprenticeships, that will expand partnerships with industry, businesses, unions, community colleges, and training organizations to train workers in the skills they need,” said in a White House statement.

In his remarks earlier in the year he asked “Vice President Biden to work with Penny Pritzker and Tom Perez, our Labor Secretary, to lead an across-the-board reform of all of our federal training programs to make sure they’ve got one clear mission:  Train Americans with the skills employers need.  Not something that looks good on paper, but doesn’t give you a job; find out what are the jobs that need to be filled and make sure folks are being trained and matched to those good jobs.”

The one thing we do not know is how effective these programs are; what is the measure of performance of these programs? Do they overlap and do they duplicate each other?

Too often Washington believes that spending more on certain programs is the best approach without ever analyzing what is currently already allocated.

The country is hemorrhaging financially and we need to get our fiscal house in order but both political parties spend more time attacking each other than solving the nation’s economic woes.

Again the president went into his rhetorical campaign haversack and stated “A lot of people don’t feel that progress in their own lives yet. So the stock market is doing great.  Corporate profits are soaring.  Folks at the very, very top are doing better than ever. But too many Americans, if they’re lucky enough to have a job, are working harder and harder just to get by, much less to get ahead.  For too many middle-class Americans, it feels as if the same trends that have been going on for decades are continuing.  You’re working hard, but wages flat-line, incomes flat-line, cost of everything else going up.”

The president’s own polices have created this income imbalance and policies by the Federal Reserve have only helped Wall Street and the expense of Main Street.