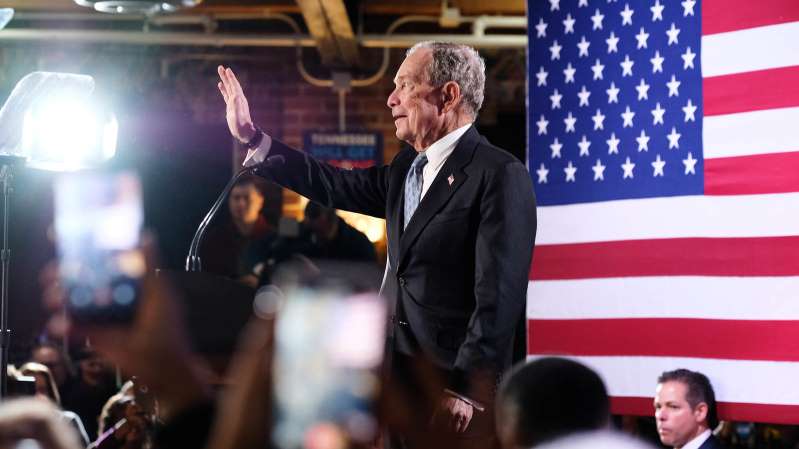 Former Mayor Michael R. Bloomberg of New York has qualified for Wednesday’s debate in Las Vegas, the first time the billionaire will appear onstage alongside his Democratic presidential rivals.

A national poll from NPR, PBS NewsHour and Marist released on Tuesday showed Mr. Bloomberg with 19 percent support among Democrats and Democratic-leaning independents, putting him in second place behind Senator Bernie Sanders of Vermont, who had 31 percent. That was a substantial surge since the group’s poll in December, when Mr. Bloomberg received only 4 percent support.

The survey was the fourth national qualifying poll since mid-January that showed Mr. Bloomberg with at least 10 percent support, enough to earn him an invitation to the debate stage before the deadline of 11:59 p.m. Eastern time on Tuesday.

The debate, which will air on Wednesday at 9 p.m. Eastern time, will be hosted by NBC News, MSNBC and The Nevada Independent.

Mr. Bloomberg’s 19 percent mark was his highest level of support in any debate-qualifying national poll to date. The latest national polling average calculated by The New York Times, which was released late last week, put him at 10 percent nationally, behind Mr. Sanders, Mr. Biden and Ms. Warren.

Mr. Sanders’s support also increased since the NPR/PBS NewsHour/Marist poll in December, when he had 22 percent. The new poll is the first debate-qualifying national poll released this year showing Mr. Sanders with more than 30 percent support.

© Shawn Poynter for The New York Times Michael R. Bloomberg, the former mayor of New York City, at a campaign event in Chattanooga, Tenn., this month. He will face off against his Democratic rivals in a televised debate this week.

In the new poll, Mr. Biden had 15 percent, Ms. Warren 12 percent, Ms. Klobuchar 9 percent and Mr. Buttigieg 8 percent. The poll surveyed 527 Democrats and Democratic-leaning independents by phone Feb. 13-16 and had a margin of sampling error of plus or minus five percentage points.

Mr. Bloomberg formally entered the race in November, nearly a year after most of the other candidates. He failed to qualify for the past several debates in part because he is not accepting outside contributions for his campaign. But new rules announced by the Democratic National Committee opened the door to his participation, as they enabled candidates to qualify for the Las Vegas debate, as well as the one that will take place on Feb. 25 in Charleston, S.C., without meeting a donor threshold.

“We are thrilled that voters could soon have the chance to see Mike Bloomberg on the debate stage, hear his vision for the country and see why he is the strongest candidate to defeat Donald Trump and bring our country together,” Mr. Sheekey said.

Tom Steyer, the other billionaire seeking the Democratic nomination, has participated in the five most recent debates, but he is unlikely to be onstage in Las Vegas. He would need to receive 10 percent support in four national qualifying polls, or 12 percent in two polls taken in Nevada or South Carolina, before the deadline.

Representative Tulsi Gabbard of Hawaii, the only other candidate still in the race, has not reached the threshold in any qualifying polls, either.

Candidates are also able to qualify for the Nevada and South Carolina debates by winning at least one delegate in the Iowa or New Hampshire contests; that is the path Ms. Klobuchar, followed to get her invitation to the stage in Las Vegas.

Mr. Bloomberg has spent over $300 million on TV advertising nationwide — more than the rest of the field combined. He decided to skip the first four nominating contests, held in states where campaigns traditionally spend a year organizing supporters, to focus instead on the delegate-rich primaries that take place beginning on Super Tuesday, March 3.

Mr. Bloomberg has seen his standing steadily rise in national polling as voters have been saturated by his television advertising. His rivals have been torn between attacking him and battling one another in the early-state contests.

Now Mr. Bloomberg is certain to be the target of onstage attacks from his rivals, especially Mr. Sanders and Ms. Warren, the two candidates who are not appearing at private fund-raisers and who have made cultivating the wrath of billionaires central to their campaigns.

Last week in Virginia, Ms. Warren told supporters that Mr. Bloomberg should not be the Democratic Party’s nominee because of his past remarks linking the end of redlining, a discriminatory housing practice, to the financial crisis.

Over the weekend other Democrats joined in. Mr. Sanders told a crowd in Carson City, Nev., that Americans were “sick and tired of billionaires buying elections.” Mr. Biden attacked Mr. Bloomberg’s record as mayor on NBC’s “Meet the Press.” And Ms. Klobuchar denounced Mr. Bloomberg for not sitting for as many interviews with the news media as she had.

Mr. Bloomberg, who has emerged in recent years as a leading financial benefactor for Democratic candidates and some liberal causes, such as gun control and environmental protection, entered politics as a Republican when he first ran for mayor in 2001. He endorsed President George W. Bush and spoke at the 2004 Republican National Convention.

He has backed other Republicans as well, including Senator Scott Brown of Massachusetts, who was ousted by Ms. Warren in 2012, and Senator Pat Toomey of Pennsylvania, a gun control ally, in 2016.