Iraq on the Brink of Self Destruction 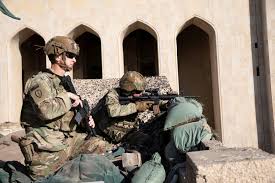 An enormous amount of coverage has been placed on the United States for instituting a drone strike which killed General Qasem Soleimani, the commander of Iran’s Revolutionary Guard Corps Quds Force, but what has been missing since the attack is the total dysfunction of the Iraqi government in Baghdad.

At the end of last year Iraq’s Prime Minister Adel Abdul Mahdi resigned after massive anti-government protests erupted across the country over the systematic corruption, lack of economic opportunities and the heavy influence of Iran into Iraq’s internal affairs.

The violent nature of the response by the Mahdi government forced his resignation, even after violence in Nasiriya, which then led the revered Shiite cleric Ali al-Sistani to criticize the heavy-handed approach and strongly requested parliament withdraw support for the Mahdi government.

Since then the government in Baghdad has been in limbo, with Mahdi still acting as the interim prime minister until one is called, but no one knows when that will take place.

At the end of December 2019, U.S. forces conducted air strikes in Iraq and Syria targeting Iranian backed militia groups, which then prompted violent protests at the American embassy in Baghdad, which would culminate in a drone strike killing Soleimani at the beginning of 2020.

The lack of effective governance in Iraq began after the fall of Saddam Hussein when the United States failed to implement an effective meaningful stability plan for a post-Saddam government.

This lack of effective governance in Iraq has prevented stability from being achieved with military analysist Anthony Cordesman of the Center for Strategic and International Studies commenting that from 2004 on, has led to the creation of a failed structure for Iraqi governance, failed civil nation-building programs, and then having U.S. forces leave in 2011 while the creation of effective Iraqi security forces was a half-finished job at best.

This premature withdrawal by the United States left a divided and fractured Iraq centered primarily on sectarian lines which enabled the rise of ISIS who then defeated a poorly led Iraq army.

With the Iraqi army in disarray and ISIS on the ascent in northern Iraq and eastern Syria from witch the Islamic State established its caliphate in the Syrian city of Raqqa; this changing development forced the United States to return to Iraq to defeat ISIS which then carried over into the Trump presidency.

With the return of the United States to Iraq, many Iraqi’s came to view the U.S. as seeking the defeat of the Islamic State was only serving their own interests instead of what was beneficial to the Iraqi people.

The Iraqi people witnessing the U.S. openly focusing on the Islamic State, with minimal efforts in telegraphing to Iraqi’s how the defeat of ISIS was in their best interest.  The U.S. failed in the information campaign on how air strikes and other military missions would make Iraq safe, or help create an Iraqi army that could stabilize the country and defend against Iran and other outside powers.

Since the United States toppled Saddam Hussein, the U.S. has never articulated a coherent post stability plan for Iraq; much blame can be leveled at President Bush for going into Iraq without a strategy for its aftermath, and President Obama for removing U.S. forces from the country without a plan for a post U.S.-Iraq.

As difficult as it was to remove Saddam Hussein, the U.S. learned the wrong lessons with regard to the reconstruction of Germany and Japan, even though both countries are vastly different, the United States never had a cohesive strategy for Iraq.  Even after seventeen years after the fall of Hussein, the U.S. still doesn’t have a strategy for Iraq!

President Trump has correctly stated that ISIS has been defeated, but that is only one aspect of the equation.  What happens to all the cities once controlled by ISIS that are now destroyed, who will begin the rebuilding of these Sunni cities?

If history is any guide, one needs to understand why the surge of U.S. combat forces was successful in stabilizing Iraq in 2007-2008, which incidentally coincided with the “Sunni Awaking” as the Sunni tribes repudiated the Islamic vision of al-Qaeda.

Given that the Iraqi government is Shiite controlled and heavily influenced by Iran, and Shiite militia’s patrol Sunni dominated areas, the only choice left is to embrace ISIS as their protectors?

As President Trump touts the success in defeating ISIS, one has to address what brought ISIS to the forefront in the first place.

After the United States precipitous withdrawal from Iraq in 2011, and after a contentious election in Iraq in 2010 one in which interim Prime Minister Ayad Allawi had won 91 seats in a parliamentary election with incumbent Prime Minister Nouri Al-Maliki having won 89 seats, the Obama administration decided Maliki should lead the country.

Once in power Maliki consolidated his power base and after the U.S. withdrew, began a systematic purge throughout the government and military and replaced them with loyalist loyal to him.  This expansion of excluding certain groups began to take hold namely against the Sunni and Kurdish population.

Throughout his time in office basic services were minimal at best, corruption was rampant, and economic opportunities were extremely wanting, this has continued even after Maliki left office.

During the last part of 2019 tens of thousands of Iraqi’s took to the streets in protesting government corruption, lack of economic opportunities and demanding that Iran diminish its activities in influencing the government in Baghdad and support for Shiite proxy forces in the country.

Far too long the U.S. has only looked at Iraqi only through a tactical and operational lens without ever implementing a truly comprehensive Phase IV strategy where wars are really won.  This is always the more difficult part; until the U.S. deals with this part it will never have stability in Iraq.