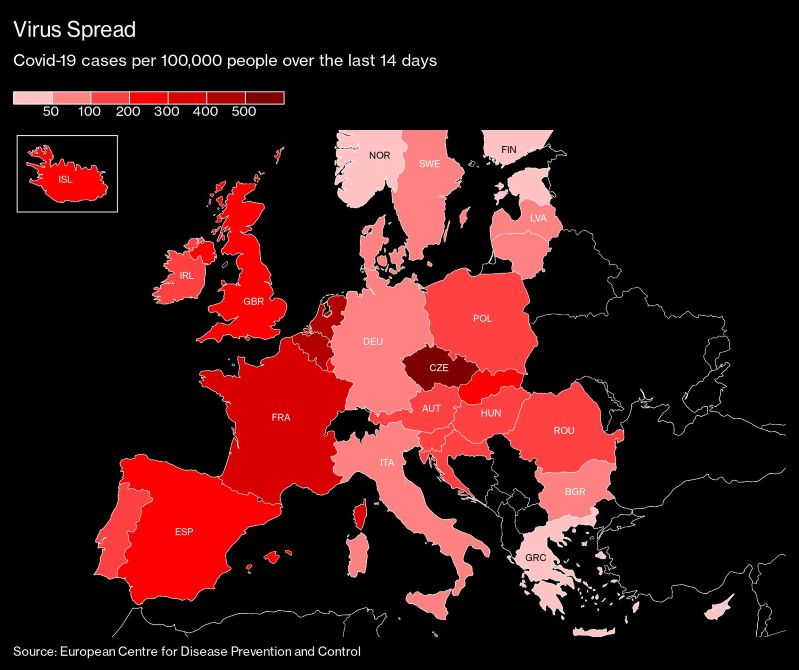 Londoners will be banned from mixing with other households indoors and Paris is set for a curfew, as European leaders struggle to cope with record new coronavirus cases around the region.

Prime Minister Boris Johnson’s government will mandate tighter restrictions in the U.K. capital starting this weekend, while French President Emmanuel Macron will confine residents of nine of the country’s biggest cities to their homes between 9 p.m. and 6 a.m. for four weeks from Saturday. German Chancellor Angela Merkel renewed an appeal to citizens to abide by hygiene and distancing rules and avoid groups.

The varied approaches around Europe to deal with the disease have caused confusion and stoked unrest amid the pandemic-weary public, especially amid low hospitalization and death rates — which nonetheless are now steadily rising.

Leaders have little recourse but to implore people to knuckle down. Johnson was adamant he did not want a second lockdown but now the prospect of a so-called “circuit-breaker” with schools closed for two weeks is in the air.

Outside London, U.K. officials are also attempting to tame the virus with a regional “whack-a-mole” strategy that has created tensions with the poorer north where the number cases are rising rapidly. There is also disparity within the U.K. itself on the best approach.

Northern Ireland is planning to close schools from Monday and impose curbs on pubs and restaurants, and Wales wants to restrict travel from English hot spots, with new regulations coming into force Friday.

This latest development comes as Germany, Italy, Austria and the Czech Republic all reported record increases in cases, and London approached an average of 100 infections per 100,000 people.

European authorities are grappling with how to devise targeted strategies that slow the spread of the disease without resorting to the kind of broad national lockdowns which decimated economic activity in the second quarter.

Merkel struggled to forge a consensus with regional German leaders in a meeting that dragged on for more than eight hours into Wednesday night.

Her chancellery minister, Helge Braun, said measures agreed for hard-hit areas — including closing bars and restaurants at 11 p.m. and extending mandatory mask wearing — are unlikely to be sufficient to tame the “enormous infection dynamic” seen in recent days.

“There can be absolutely no question that this is the start of a very broad second wave,” Braun, a qualified medical doctor, said Thursday in an interview with ARD television. “The longer we wait and the more indecisive we are, it’s not only key for our health but also for our economy.”

Merkel was unable to agree with state premiers on restrictions on domestic travel, with some officials arguing that they are unnecessary and ineffective. Germany recorded 7,173 new cases in the 24 hours through Thursday morning, exceeding a high during the previous peak of the pandemic in late March.

“Economically we can’t afford a second wave with the same consequences as we had in the spring,” Merkel said. “What we do and don’t do in the coming days and weeks will be key to the question of how we make it through this pandemic.”

The region as a whole recorded almost 700,000 new cases last week, the most since the pandemic began, and taking the total to just below 7 million, according to the World Health Organization. Britain, France, Russia and Spain accounted for over half of all new cases.

In France, daily cases have jumped to more than 17,000 from less than 12,000 a week ago, and more than 40% of intensive-care beds in the Paris region are taken by Covid-19 patients. Prime Minister Jean Castex and ministers are due to provide details on the new measures later on Thursday.

Macron said Wednesday the situation in hospitals is “unsustainable” and the goal is to bring new cases down to 3,000 to 4,000 a day. “We are learning how to be a nation again,” he said. “We had become used to being individuals. But we are a united nation, and we will succeed.”

Italian Prime Minister Giuseppe Conte warned that the nation will “be in trouble again” if the rising trend persists and for the first time declined to rule out a new nationwide lockdown. The country reported a record 7,322 new infections on Wednesday.

“I’m not making any predictions,” Conte said when asked about a virologist’s warning that the country could be under lockdown by Christmas. “A lot depends on how citizens behave.”

In Spain, Foreign Minister Arancha Gonzalez Laya pushed back against reports that the spread of the virus and the political tussling over how to contain it are sparking concerns in Berlin. The country has registered 300,000 new cases over the past month, bringing the total number of infections to almost a million.

In an interview with Bloomberg Television Thursday, Gonzalez Laya insisted that the Spanish outbreak is “under control” and criticism of her government’s fight with the Madrid region over tighter restrictions is unfair.

“What’s happening in Spain is not unlike what happens in the Laender in Germany,” she said. “When the central government tells the regions they need to take tough measures, some of them are not happy about that.”