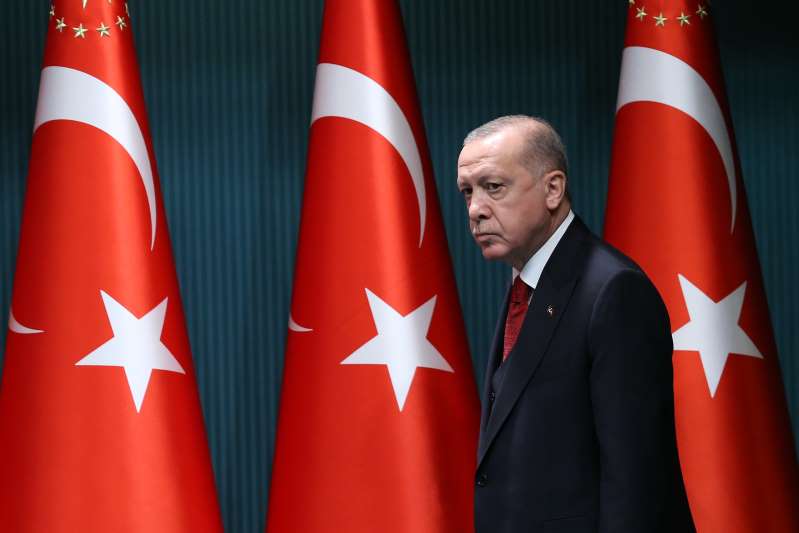 For the past several months, Turkish President Recep Tayyip Erdogan has busily dispelled any residual doubts about his hostility toward the U.S. and its allies in NATO and the Middle East. He has accomplished this in multiple ways. Erdogan purchased Russia’s S-400 surface-to-air missile system and, in a swipe at the U.S. and NATO, announced his intention to test the system next week.

He threatens and seeks to subvert Saudi Arabia, Egypt and the United Arab Emirates. He has destroyed his nation’s longstanding strategic alliance with Israel.

He has cast his lot with the Muslim Brotherhood in the Arab world, and with Iran against his Arab enemies. Indeed, Erdogan has effectively appointed himself the head of the Muslim Brotherhood. An associate of his recently published a map of a new Ottoman Empire, or “Greater Turkey”—with Erdogan as sultan. It included vast territories spanning from northern Greece to the east Aegean islands, half of Bulgaria, Cyprus, most of Armenia and large swaths of Georgia, Iraq and Syria.

Erdogan is fighting on behalf of Sunni jihadists in Syria and in Libya.

On the positive side, Erdogan’s fights in Syria and Libya place Turkey in confrontation with Russia, which is siding with the opposite side in both wars. Erdogan started a new fight with Russia over the past couple of months, which now threatens to transform into a major war. Erdogan is fighting with Azerbaijan against Russia’s client Armenia for control over the disputed Nagorno-Karabakh area that both Armenia and Azerbaijan claim.

How is the U.S. supposed to deal with Erdogan, the head of NATO member Turkey—a strategically placed ally, traversing two continents, that Washington has long viewed as indispensable?

The Pentagon rejects calls to walk away from Turkey. And a brief look at the map makes clear the generals’ reluctance. Perched on Russia’s backyard, Turkey’s massive landmass provides U.S. forces with easy access to key theaters in Asia, the Middle East and Russia.

To uphold the alliance, the U.S. has consistently bowed its head in the face of Turkish aggression against its allies and partners. In 2019, the U.S. agreed to ditch the Kurdish forces in Syria, despite their central role in assisting U.S. efforts to destroy ISIS’s caliphate, in order to avoid a direct confrontation between U.S. and Turkish forces. Secretary of State Mike Pompeo just visited Greece and told its leaders to stand down against Turkey and seek a diplomatic solution to Turkey’s aggression.

Owing to Turkey’s strategic importance, the U.S. has turned a blind eye to its sponsorship of Hamas. The U.S. has not called Turkey to account in a serious way for its willingness to permit ISIS to use Turkey as its logistics and mobilization base, or economic hub, during the years that the murderous jihadist group controlled large portions of Syria and Iraq.

During Barack Obama’s presidency, kowtowing to Erdogan was of a piece with Obama’s foreign policy vision. Obama and his vice president, Joe Biden, sought to restructure the U.S. alliance system in the Middle East away from Israel and the U.S.’s traditional Sunni Arab allies and toward Iran and the Muslim Brotherhood. Given its radical thrust, it made sense when Obama told an interviewer in 2012 that he spoke with Erdogan more than any other foreign leader.

Throughout their second term, Obama and Biden did nothing to stop Erdogan’s efforts to destabilize and subvert Sisi’s government and return the Muslim Brotherhood to power. Today, some 20,000 members of Egypt’s Muslim Brotherhood are living in Turkey, which has become their center of operations just as the nation serves as the operational center of Hamas.

The Obama-Biden administration also did not seriously object to Erdogan’s efforts on behalf of Iran when he transformed Turkey into a major economic hub for Iranian sanctions busting. Obama’s decision to appease Tehran through the nuclear deal that gave Iran an open road to a nuclear arsenal and enriched the mullocracy by abrogating the UN economic sanctions against it made him, by consequence, supportive of Turkey’s outreach and support for the Iranian regime.

The Obama-Biden desire to appease Iran precluded their administration from taking effective action against Syrian President, and Iranian and Russian client, Bashar Assad. Obama’s unwillingness to confront Iran empowered Russia to deploy forces to Syria for the first time since 1982. Obama’s supine policy in Syria also played a role in Erdogan’s decision to begin negotiations regarding the purchase of Russia’s S-400 system, which drove a stake into the NATO alliance.

Biden has pledged to reinstate Obama’s foreign policy in the Middle East and worldwide if he is elected next month.

On the surface, Trump’s policies toward Turkey don’t appear that different from Obama’s. He has not challenged Turkey’s membership in NATO. He has bowed to Turkey’s demands in Syria. Although he did block the delivery of F-35s to Turkey, he has refused to-date to sanction Turkey for its aggressive behavior toward Greece and Turkey. He hasn’t removed U.S. forces and nuclear warheads from Incirlik Air Base in Turkey. And he continues to refer to Erdogan as a leader he respects.

But in practice, Trump’s policy is very different from the Obama-Biden policies. Trump is not an ideologue except insofar as “America First” can be considered an ideological position. His commitment to advancing U.S. interests has compelled Trump to set aside traditional policies if they do not conform to realities on the ground. Traditionally, for instance, it has been considered impossible to forge peace between Israel and the Arab states so long as the Palestinian conflict with Israel remains unresolved. Trump saw, however, that Israel and several Gulf Arab states and Egypt were maintaining intense, friendly ties and realized that the traditional perceptions of the Middle East were wrong.

From the time of Ronald Reagan, the prevailing wisdom in Washington was that the U.S. had to cut a deal with the ayatollahs in Iran. Trump realized that no one had succeeded because the Iranian regime seeks to destroy the U.S.—not make peace with it. The Iranians even refused to sign their nuclear deal with Obama, lest they be perceived as making peace with “the Great Satan.”

The consistent themes of Trump’s foreign policies in the Middle East and throughout the world are that he has insisted on judging leaders by their deeds, and not their words; judging policies by their success in making the U.S. and its allies better off, and not by the support they receive from the foreign policy establishment; and basing U.S. partnerships with foreign states on the presence of shared interests, rather than relying on formal alliance structures to advance American interests and goals.

All of these aspects of Trump’s foreign policies are vital for developing and maintaining a successful U.S. policy toward Erdogan’s Turkey, as Erdogan exposes himself as a foe interested in pitting all sides against one another to enable his efforts to construct a new Ottoman Empire. Many commentators advocate expelling Turkey from NATO. But it isn’t clear that a head-on confrontation with Erdogan would neutralize him. It could well empower him by helping him to rally the Turkish public behind him at a time when Turkey’s economy stands on the brink of collapse.

Given Erdogan’s multipronged aggression, the first goal of a realistic policy would be to diminish his power by severely weakening Turkey economically. This may mean imposing economic sanctions on Turkey for its aggression against Greece and Cyprus. Or it may mean simply giving Turkey a gentle push over the economic cliff.

Without raising the issue of removing Turkey from NATO, the U.S. can simply not sell Turkey advanced platforms while demonstrating its support for Greece and Cyprus, as well as Israel and its Arab partners.

True, China is already seeking to supplant the U.S. in sponsoring the Turkish economy and selling Turkey arms—but by keeping Turkey in NATO, the U.S. still has more leverage over Turkey than China.

A passive-aggressive policy for diminishing Erdogan’s power and the threat he can mount is right up Trump’s alley. Trump doesn’t often directly attack his opponents. He embraced North Korean leader Kim Jong-un even as he imposed the harshest economic sanctions ever on North Korea and redesignated it a state sponsor of terrorism. He has acted similarly with Putin and with Erdogan himself.

Erdogan’s belief that he can rebuild the Ottoman Empire while attacking EU and NATO members, the U.S., its key allies in the Middle East as well as Russia, owes to his narcissism that Obama and Biden did so much to feed.

With Erdogan now openly threatening multiple U.S. allies, it is increasingly apparent that the largest and fastest rising threat to stability and peace in the Middle East is Turkey—and the victor in next month’s U.S. presidential election will have no lead time to deal with it.

Trump’s reality-based foreign policy, his preference for indirect confrontations and empowerment of U.S. partners to defend themselves from aggression, rather than dictating their actions or fighting their battles for them, give the president the flexibility to diminish Erdogan’s maneuver room, his economic independence and his popularity at home—while also empowering U.S. allies directly affected by the strongman’s aggression to stand up to him effectively, with or without direct U.S. involvement.

Caroline B. Glick is a senior columnist at Israel Hayom and the author of The Israeli Solution: A One-State Plan for Peace in the Middle East, (Crown Forum, 2014). From 1994 to 1996, she served as a core member of Israel’s negotiating team with the Palestine Liberation Organization.

The views expressed in this article are the writer’s own.