Skip to content
Home » Defense » Is the Pentagon Ready for the Next Conflict?
Previous Next

Is the Pentagon Ready for the Next Conflict? 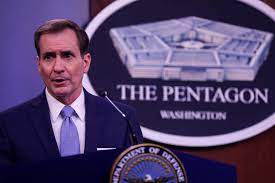 All military leaders understand the treatises articulated the famous Chinese military strategist, Sun Tzu, “It is a doctrine of war not to assume the enemy will not come, but rather to rely on one’s readiness to meet; not to presume that he will not attack, but rather to make one’s self invincible.”

After the military debacle with the American pullout from Afghanistan, the nation must ask the fundamental question: is America ready for the next conflict and do our enemies fear the United States?

Ever since the end of the Cold War, with the collapse of the Soviet Union the United States faced no peer competitor, but now the U.S. is facing a resurrected Russia an expansionist China who seeks to upend the global world order established by America after World War II.

This lack of fear of the U.S. was on full display this past March, when China and America’s respective national security leadership met in Anchorage, the Chinese delegation totally dressed down their American counterparts, with no push back from the Biden administrations national security officials.

Last October, the U.S. military conducted a wargame utilizing a particular scenario involving conflict with China over Taiwan from which the vaunted American military suffered a brutal defeat. This duplicated various other exercises over the past few years which had the U.S. losing or just barely hanging on to a victory.

The classified nature of the wargames weren’t available to be discussed by Hyten, but the general did mention that the U.S. thoroughly dominated from the start to finish.

Hyten mentioned, “Without overstating the issue, it failed miserably. An aggressive red team that had been studying the United States for the last 20 years just ran rings around us. They knew exactly what we’re going to do before we did it.”

Since the beginning of the “War on Terror” in 2001, our adversaries have dissected and extensively analyzed how the U.S. military conducts itself in combat, which have enabled them to utilize our tactics and techniques against us, that will lead to our ultimate defeat.

One of our staunchest allies in the world, Israel faced two similar situations of overconfidence which almost cost them the loss of their country in the 1973 Yom Kippur and the debacle of the 2006 second Lebanon conflict with Hezbollah. During the latter conflict Israeli troops were poorly trained, utilized an outdated military strategy against a different kind of enemy. The end result was a great loss of life with minimal showing for its efforts.

What the Chinese leadership in Beijing views America in decline, consumed by woke culture that has infected every American institution including the U.S. armed forces. Instead of meeting the Chinese threat the Biden administration has the Department of Defense consumed with diversity and counter culture training then actual warfighting.

The Department of Defense is hell bent on eradicating extremist in the ranks, but current Secretary of Defense Lloyd Austin during a congressional hearing couldn’t decide what that means nor could his press secretary John Kirby.

If history is any guide, President Washington spoke to a Joint Session of both the House and Senate stated, “The surest way to preserve peace is to prepare for war.”

Is the Department of Defense fulfilling this core mission, but a recent report says other wise  “Is The U.S. Navy Ready for War?” conducted by retired Marine Lt. Gen. Robert Schmidle and Rear Adm. Mark Montgomery, commissioned by Sen. Tom Cotton, Reps. Mike Gallagher, Dan Crenshaw and Jim Banks, finds the Navy as an institution is adrift, concerned more with diversity training then preparing its service for actual warfighting.

The report highlights the fact that senior naval commanders are more concerned with staying off the front page of the news, operating under a zero defect command structure, where one mistake would end your career. If this system was in place during World War II, four of our most cherished commanders who led U.S. to victory, Admiral Nimez, Halsey, King, and Leahy would never had made it to the rank of captain let alone selected as admirals.

Early this year, Commander of U.S. Indo-Pacific Command Admiral Philip S. Davidson testified before the Senate Armed Service Committee on U.S. Indo-Pacific command posture and stated, “The greatest danger for the United States in this competition is the erosion of conventional deterrence. A combat-credible, conventional deterrent posture is necessary to prevent conflict, protect U.S. interests, and to assure our allies and partners. Absent a convincing deterrent, the People’s Republic of China (PRC) will be emboldened to take action to undermine the rules based international order and the values represented in our vision for a Free and Open Indo-Pacific. The combination of the PRC’s military modernization program and willingness to intimidate its neighbors through the use, or threatened use of force, undermines peace, security, and prosperity in the region.”

In his continued testimony, Admiral Davidson stated, “The PRC represents our greatest strategic threat. Its rapidly advancing capabilities and increasingly competitive posture underscore its drive to become a regionally dominant, globally influential power. Beijing is growing increasingly confident, and PRC leaders have demonstrated a willingness to accept friction to pursue a more expansive set of political, economic, and security interests. This growing assertiveness is particularly acute concerning sovereignty disputes, as Beijing seeks to steadily and incrementally shift the regional status quo to their advantage.”

In his last days in office, President Eisenhower gave his famous farewell address urging the nation to “guard against the acquisition of unwarranted influence, whether sought or unsought, by the military-industrial complex. The potential for the disastrous rise of misplaced power exists and will persist.” In the proceeding decades the U.S. has consistently failed to address the antiquated procurement and acquisition of the Pentagon budgetary system.

Eisenhower was speaking from past experience while serving as president, far too often military leaders who always seek the latest weapons program without contemplating future threats to the United States.  Anthony Cordesman of the Center for Strategic & International Studies in a reported, “Ending America’s Grand Strategic Failures” that “The U.S. has made progress in one area: making increases in the defense budget, but far too many of these increases have gone to funding the readiness and the shopping lists of the U.S. military services. There have been few original ideas and changes that have actually benefited national security.”

Even military historian at the Hoover Institute Victor Davis Hanson echoed this sentiment, “Our Pentagon suffers from a huge overhead in clumsy and wasteful procurements, unsustainable retirement pensions and benefits, and often poor weapon investment choices. Too many of its top brass and retired officer corps have become politicized. Many of our four-stars seem more attuned to leveraging politically correct promotions and post-retirement corporate board memberships than focusing on military readiness and deterrence.”

The nation’s political leadership of both parties often uses the Pentagon as a job creation program for their states or districts, Democrats often want a leaner Defense department and want weapons systems reduced except when it targets their state or district. Republican’s want greater defense spending without any forethought on how that money is spent and on what weapon’s program.

Then you have many members of Congress, Senate and their staff upon leaving government service find positions with many of the major defense contractors, this includes retired generals. Case in point is current Secretary of Defense Lloyd Austin upon retiring from the military in 2016, joined the boards of major U.S. companies including Raytheon Technologies, a major defense contractor.

He follows the same trajectory as other former senior military commanders, who obtained lucrative defense assignments with many leading defense contractors.

Cordesman also mentioned that “The cost of U.S. defense has escalated far beyond $700 billion a year without any clear sense of direction, and it has done so at a time when even the highest estimates of Chinese spending do not go beyond $250 billion and estimates of Russian spending rarely go beyond $62 billion. There are no areas where increases in spending have been publicly tied to net assessments of the threat or to the comparative effectiveness of each side’s military spending.”

National security experts have stated that the current FY2021 budget is based on sound strategy, but in reality it caters to the specific wish list of the various military branches without regard to regions, or combatant command in key areas, or of support to joint warfare.

To date there has been no future strategic defense strategy, and nothing of future strategy, with the only changes being recommended coming from the combatant commands instead of the nation’s military leadership of the Joint Chiefs of Staff or the heavy bureaucratic Office of the Secretary of Defense.

The time has come to institute a 21st century reform that encompasses all federal spending and that includes overhauling the antiquated acquisition and procurement of the Department of Defense.

National defense and political leaders need to revert back to the mission statement of the Department of Defense which states; “It’s responsible for providing the military forces needed to deter war and protect the security of our country.”

Any national defense budget must meet one requirement, how does this provide the military forces needed to deter war and protect the security of our country? The Department of Defense spends just over $700 billion, but is the U.S. spending wisely or is there programs that could be eliminated, are there duplication between services that can be consolidated; do we need everything currently allocated?

Admiral Davidson gave his recommendations on what is needed to prevent a conflict in Asia, but are the nation’s military and political leaders listening?

If the nation’s defense resources are wasted on parochial spending that lacks strategic thought on how the U.S. military fights the next conflict, if we fail to prepare for the next war, we will lose!