Committee to meet Tuesday to Approve Release of Ukraine Report 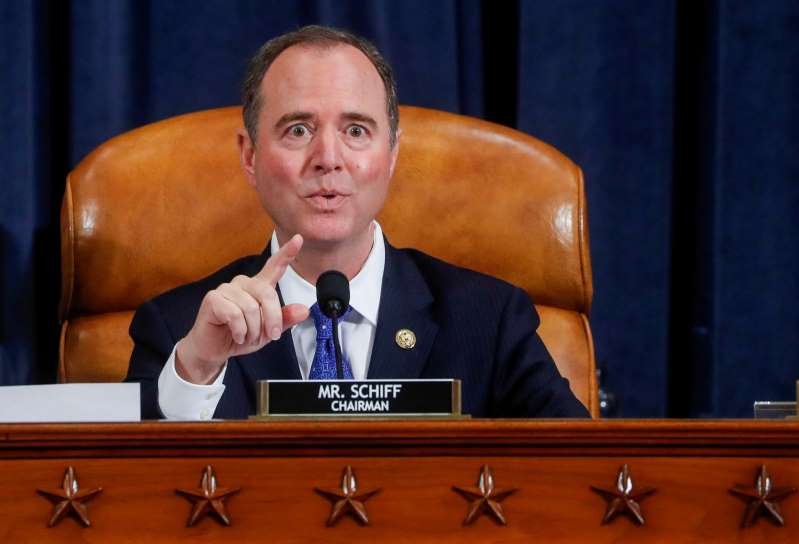 House Intelligence Committee Chairman Adam B. Schiff ­(D-Calif.) set a Tuesday meeting to approve the release of a report expected to detail the panel’s findings on President Trump’s dealings with Ukraine.

In keeping with committee rules, panel members are expected to be able to review the report starting at 6 p.m. Monday, 24 hours before the scheduled meeting. It comes after closed-door depositions with 17 government witnesses and televised public hearings with several of those officials.

The expected release of the report, coming nearly two weeks after the last public hearing conducted by the Intelligence Committee, continues a breakneck pace for House Democrats as they investigate the potential impeachment of the president. Although Schiff and House Speaker Nancy Pelosi (D-Calif.) have not committed to a firm timeline, Tuesday’s meeting keeps the House on a trajectory to possibly approve articles of impeachment on the House floor before Christmas, setting up a Senate trial on Trump’s removal early in the new year.

Democratic staffers on the Intelligence Committee worked through the Thanksgiving recess to complete their report, while lawmakers spent the week at home in their districts. Their exact findings are not publicly known, but the report is expected to lay out a case for Trump’s abuse of his presidential powers — that he used the promise of a White House meeting and the withholding of military aid approved by Congress to compel Ukraine’s government to launch politically motivated investigations into his political rivals.

Schiff wrote in a letter to colleagues last week that “the evidence of wrongdoing and misconduct by the President that we have gathered to date is clear and hardly in dispute.”

“The President has accepted or enlisted foreign nations to interfere in our upcoming elections, including the next one; this is an urgent matter that cannot wait if we are to protect the nation’s security and the integrity of our elections,” he wrote. “What is left to us now is to decide whether this behavior is compatible with the office of the presidency, and whether the Constitutional process of impeachment is warranted.”

It is unclear whether Republicans on the committee, led by Rep. Devin Nunes (R-Calif.), will release a report of their own. But they have put forth numerous arguments against impeachment during the two weeks of public hearings — noting that the aid was ultimately delivered, for instance, and that Trump had good reason to question rampant corruption in Ukraine and put strings on any U.S. aid delivered there.

Although Schiff has not ruled out calling additional witnesses should circumstances warrant, the completion of the Intelligence Committee report marks a new phase in the impeachment inquiry — one in which the investigatory baton is being handed from Schiff to Judiciary Committee Chairman Jerrold Nadler (D-N.Y.). The Judiciary Committee is expected to use the Intelligence Committee report, along with its own findings and those of other investigating panels, to fashion articles of impeachment that are likely to be forwarded to the House floor.

One article, according to lawmakers and aides involved in the impeachment inquiry, is almost certain to include what they consider is Trump’s abuse of power surrounding his dealings with Ukraine — a situation Schiff and others have called “bribery,” which is specifically stated as an impeachable offense in the Constitution.

House Democrats are also looking closely at other articles centering on Trump’s refusal to cooperate with congressional subpoenas and evidence requests — an offense some Democrats have described as contempt of Congress — and whether Trump committed obstruction of justice through the conduct detailed in former special counsel Robert S. Mueller III’s report into Russian interference in the 2016 presidential election.

Nadler on Friday gave Trump a Dec. 6 deadline to decide whether he would take advantage of due process protections afforded to him under House rules adopted in October, including the right to request witness testimony and to cross-examine the witnesses called by the House. It is unclear whether Trump will comply. So far he has maintained near total resistance to the impeachment inquiry, decrying it as a politically motivated “witch hunt.”