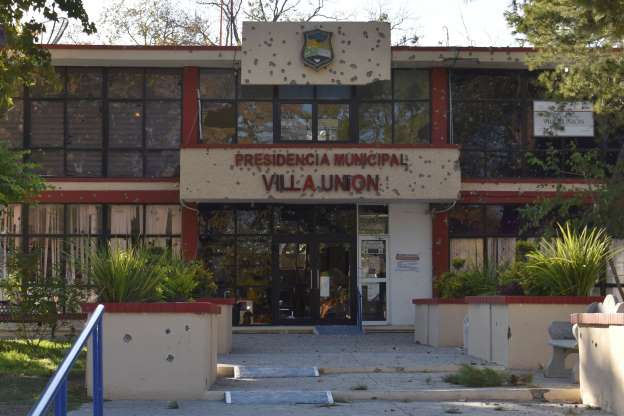 Dozens of cartel gunmen attacked a town hall in northern Mexico, triggering a running battle with security forces that left 19 dead by Sunday in a fresh sign of the deteriorating security around the country.

The assault started at around noon on Saturday, the eve of President Andrés Manuel López Obrador’s first anniversary in office. Polls show Mexicans regard the failure to curb violence as the greatest weakness of the generally popular leftist leader.

López Obrador is also under pressure from President Trump, who revealed last week that he wants to designate Mexican cartels as foreign terrorist organizations. The Mexican leader told a rally on Sunday that he had no intention of returning to the kind of “war on drugs” led by the army in past years.

“We will never repeat this absurd and deranged strategy, we will not risk the lives or prestige of the armed forces, nor use them for inhumane actions” that violate human rights, López Obrador told throngs in Mexico City who were celebrating his first year in office.

The attack in the town of Villa Union, around 40 miles southwest of Eagle Pass, Tex., highlighted how the splintering of Mexico’s top cartels has sparked more violence. It was believed to be carried out by the Cartel of the Northeast, an offshoot of the once-powerful Zetas, which is based in the border city of Nuevo Laredo. Several groups that spun off from the Gulf and Zetas cartels are fighting with each other in Tamaulipas and nearby states.

The attackers swept into Villa Union in at least 14 trucks, some of them armored and bearing the cartel’s logo, according to news reports.

The gunmen unleashed a furious battle at the town hall, peppering the facade with bullets. Terrified residents shut themselves in their homes as the pop-pop-pop of gunfire filled the air, according to local news reports and video. The attackers fled after about 90 minutes, authorities said.

Mexican police and soldiers, backed by army helicopters, chased them in an operation that stretched into Sunday morning, local authorities said. The dead included four state police officers, 13 alleged cartel members and two civilians kidnapped and killed by the attackers, according to Coahuila Gov. Miguel Riquelme. State authorities earlier had put the death toll at 21.

It was not immediately clear why the town was targeted. Coahuila was ravaged by attacks by the Zetas in the early part of this decade, but has not been among Mexico’s most violent states more recently.

The clash came as Mexico is trying to prevent Trump from carrying out his pledge to designate the country’s drug cartels as terrorist groups. Mexico fears such a move could hurt investment and tourism and open up the possibility of unilateral American action. Foreign Minister Marcelo Ebrard plans to meet this week with U.S. Attorney General William P. Barr to discuss the designation.

The attack in Villa Union was the latest in a series of assaults that highlighted the expanding grip of organized crime. In October, Sinaloa Cartel gunmen virtually took control of the city of Culiacan to free the son of Sinaloa cartel druglord Joaquin “El Chapo” Guzman. They were successful — authorities soon released Ovidio Guzmán.

Weeks later, gunmen killed nine members of the LeBaron family, Mormons who hold dual U.S.-Mexican citizenship, outside the town of La Mora in Sonora state. Mexican authorities say the family apparently was caught in the middle of a fight for territorial control involving offshoots of the Juárez and Sinaloa cartels.

The U.S.-backed strategy of going after drug kingpins has led to a pulverization of the main cartels, with dozens of smaller groups emerging.

López Obrador has tried to address the roots of violence by offering employment and scholarships to young people. He also established a 70,000-strong National Guard to improve security, but it has just gotten off the ground — and many members have been diverted to stop U.S.-bound Central American migrants, under an agreement with Trump.

López Obrador has been criticized for lacking a more integrated strategy, that would include strengthening local police and the judiciary.

Ernst said it wouldn’t be fair to blame the president for an armed conflict that had intensified under the past two administrations. “But the responsibility indubitably lies with him and his team now to take pertinent steps to reverse that trend,” he said.

Lateshia Beachum contributed to this report.