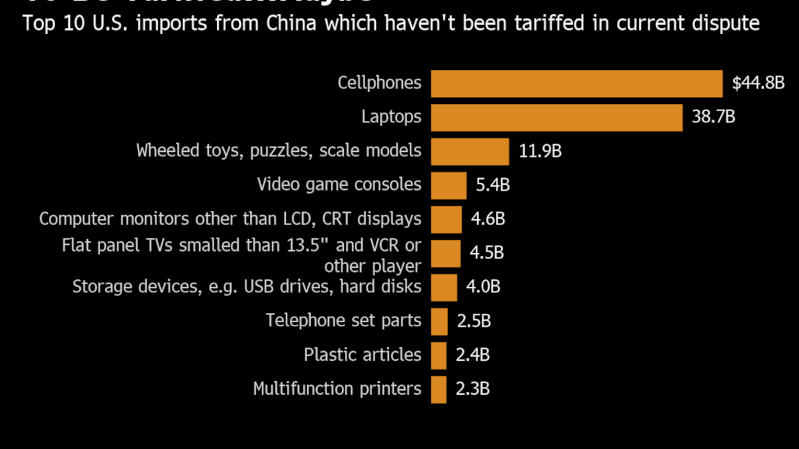 China’s economic growth could tumble, debt surge and foreign companies flee in a deepening trade war, economists warn as a week of escalating tensions forces them to ponder worst-case scenarios.

Bank of America Corp., Morgan Stanley and UBS Group AG say China’s expansion may slow below 6 percent under such a scenario for the first time in almost three decades. The 5.8% pace seen by chief Greater China economist Helen Qiao at Bank of America would create “a more dire growth environment than the number suggests.”

Analysts are assessing the damage to China’s role as the world’s supply hub as tariffs drive manufacturers overseas. They’re also warning of a spiraling of debt that’s already closing on 300 percent of output as the government cushions the blow with additional spending. Fresh curbs on Huawei Technologies Co.’s access to the U.S. market and American suppliers underscore the threat of economic containment China that is having to contend with.

“The potential long-term cost is huge,” said Larry Hu, chief China economist at Macquarie Securities Ltd. in Hong Kong. “They must know that Japan fell into the lost decade partly because the Bank of Japan overstimulated the Japanese economy after the Plaza Accord.”

The escalating clash with the U.S. is exacerbating existing economic judders, with datareleased Wednesday showing the expansion lost momentum in April even before President Donald Trump raised additional tariffs on $200 billion of Chinese imports to 25% from 15%. The weakness raises the stakes for President Xi Jinping to avert a prolonged economic confrontation at a possible meeting with Trump at the Group of 20 summit in Japan next month.

The economy is set for a bumpy ride in the short term, with additional tariffs on $200 billion of Chinese products shaving 0.3 percentage points this year, according to economists surveyed by Bloomberg News. An additional 0.6 percentage points will be sliced off expansion in the year after all goods are hit by U.S. tariffs — as Trump threatens from June, according to the survey’s median estimate.

A full-blown escalation with blanket 25% tariffs imposed by both sides would push China’s growth below the lower bound of the 6% to 6.5% growth target set for this year by the second half of 2019, and to 5.5% next year, according to Morgan Stanley.

Citigroup sees the cumulative impact of U.S. tariffs eliminating as many as 4.4 million jobs even before Trump slaps tariffs on those remaining Chinese exports of about $300 billion.

“The outlook is bleak,” said Chen Long, an economist at research firm Gavekal Dragonomics in Beijing in a May 14 note. “Equities are likely to correct further, potentially wiping out most of the market’s year-to-date gains. Bond yields will fall again, after the recent pick-up. And the renminbi is likely to soften,” he said, referring to the yuan by its other name.

Xi is poised to deliver the stimulus needed to prevent a steeper growth plunge, likely causing debt to rise more sharply after a two-year campaign to rein it in. Blanket tariffs on Chinese products render the balance between short-term growth and debt sustainability “unattainable,” according to Societe Generale SA. As debt climbs, that may reignite concerns over systemic financial risks.

It’s the potential for longer-term damage to China’s economic model though that most concerns economists should Xi become embroiled in a protracted economic war.

U.S. tariffs on Chinese products have already set in motion a profound shift in global supply chains that won’t be easily reversed. That threatens to accelerate the departure of manufacturers that already are reeling from rising labor and other costs.

Altogether, an economic war with the U.S. “blows China up,” said Michael Every, head of Asia financial markets research at Rabobank in Hong Kong. “China would be cut off from Western markets, ideas, technology, and U.S. dollar-flow long, long before it’s ready to replace the U.S. for real.”