Skip to content
Home » Defense » Will Terror Organizations Use Drones to Attack the US?
Previous Next

Will Terror Organizations Use Drones to Attack the US? 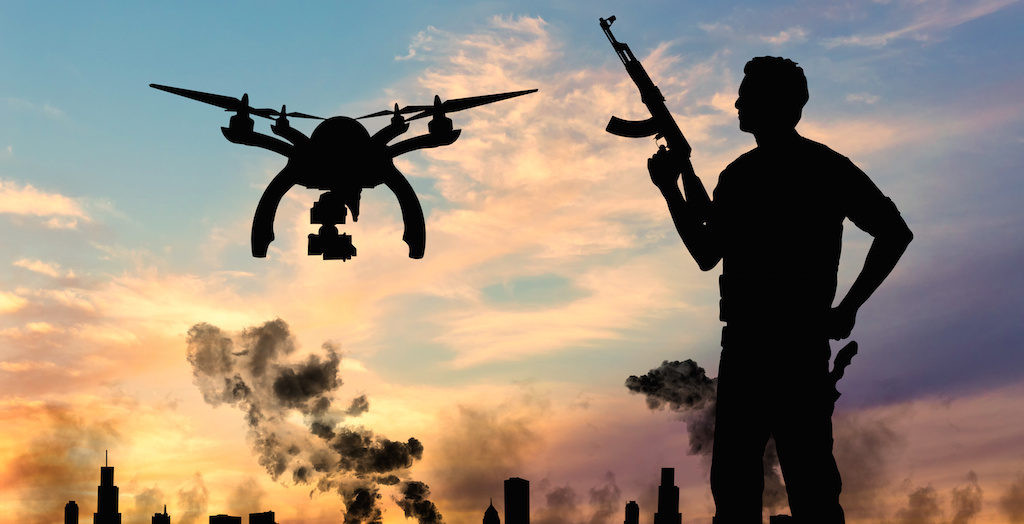 “This last year’s most daunting problem was an adaptive enemy who, for a time, enjoyed tactical superiority in the airspace under our conventional air superiority in the form of commercially available drones and fuel-expedient weapons systems, and our only available response was small arms fire,” General Thomas reported.

The United States must continue to adapt to the changing nature of terrorism because terror organizations are no longer utilizing traditional weapons and explosives. They are turning to fourth-generation warfare: the use of drones for deadly attacks.

ISIS used a bomb-laden drone to kill two Peshmerga soldiers in 2016. Additionally, ISIS released a propaganda video in 2017 that highlighted various incidents when they were able to accurately release munitions on their enemies from drones.

One of the more popular choices for ISIS is the DJI Phantom, developed by a Chinese company. The DJI Phantom is cheap at around $1,000.

At the conference, General Thomas commented on the threat of drones from ISIS. “About five or six months ago, there was a day when the Iraqi effort nearly came to a screeching halt, where literally over 24 hours there were 70 drones in the air,” he recounted. “At one point, there were 12 ‘killer bees,’ if you will, right overhead and underneath our air superiority.”

ISIS was able to purchase the drones, have them modified, mount a 40-mm weapon and fire at a target.

This new capability of drone use by terror organizations is not exclusive to the Middle East; it is a direct threat to the U.S. homeland. FBI Director Christopher Wray told the Senate Homeland Security and Governmental Affairs Committee in October 2018 that he is convinced that terror organizations will use drones and other unmanned aircraft to carry out attacks within the United States, as this threat is “steadily escalating” due to their widespread availability and use.

Further in his testimony before the committee, Wray stated, “The FBI assesses that, given their retail availability, lack of verified identification requirement to procure, general ease of use, and prior use overseas, UAS will be used to facilitate an attack in the United States against a vulnerable target, such as a mass gathering.”

Wray also stated, “We have seen repeated and dedicated efforts to use UAS as weapons, not only by terrorist organizations, such as ISIS and al-Qaeda, but also by transnational criminal organizations such as MS-13 and Mexican drug cartels, which may encourage use of this technique in the U.S. to conduct attacks.”

Drones in South America and the Middle East

Last August, a drone exploded near Venezuelan President Nicolas Maduro in a brazen assassination attempt. Other nations have also developed their own drone arsenal. The Middle East Media Research Institute in 2015 reported that Iran had produced a wide assortment of drones – including one that was reverse-engineered from a U.S. RQ-170 Sentinel that crashed in Iran in 2011.

Hezbollah became the first terror organization to use drones, with Iran supplying the group highly sophisticated drones beginning in 2002 and using many over Israel since 2004. Additionally, Hamas owns and operates its own drones. During the 2014 Gaza War, Israel destroyed a drone using a Patriot missile system near the port of Ashdod and subsequently downed additional drones in 2015 and 2016.

Iran also sent drones to the Houthi rebels fighting Saudi Arabia inside Yemen. The Houthis released a video of a drone attack on a Saudi frigate that killed two crew members.

Could Drone Attacks Come to The US Mainland?

So is it likely that a terror drone attack might take place in the United States? According to Wray, the drone threat to the homeland is “imminent.” In January, the Department of Homeland Security released a National Terrorism Advisory System Bulletin that also warned of the domestic terror threat from drones.

Drone technology is becoming more and more prevalent and drones are getting cheaper to acquire. They are now a major feature of the modern battlefield and appear in the arsenal of our enemies, including terrorist organizations.

The threat from drones is a rising national security threat to the United States. However, the regulation of them is a gray area with Congress having to balance legislation between freedom and security.

With the commercial availability of these unmanned aircraft and the ability of terror groups to acquire and use them, it is only a matter of time before a terror drone attacks a civilian population abroad or even here in America.