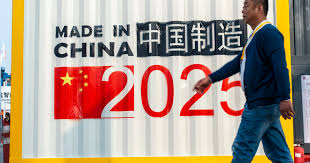 Speaking at the Gerald R. Ford Presidential Museum U.S. Attorney General William Barr stated, “I’m privileged to speak here today about what may prove to be the most important issue for our nation and the world in the twenty-first century and that is, the United States’ response to the global ambitions of the Chinese Communist Party.”

The Attorney General continued to lay out the threat posed by China, “The CCP rules with an iron fist over one of the great ancient civilizations of the world.  It seeks to leverage the immense power, productivity, and ingenuity of the Chinese people to overthrow the rule-based international system and to make the world safe for dictatorship.”

Ever since the re-opening of China close to fifty years ago culminating in the historic Nixon-Mao meetings of the early 1970s, which lead to subsequent U.S. presidential administrations to pursue a policy of steady engagement with China.

Author James Fallows in the “Atlantic”  wrote in December 2016, that this policy “From one administration to the next, it has been built on these same elements: ever greater engagement with China; steady encouragement of its modernization and growth; forthright disagreement where the two countries’ economic interests or political values clash; and a calculation that Cold War–style hostility would be far more damaging than the difficult, imperfect partnership the two countries have maintained.”

In his book, “Exercise of Power,” former Secretary of Defense Robert Gates wrote, “American political leaders across the spectrum, as well as businesspeople and the intelligentsia, believed the long contest would go our way in China, based not on evidence or observation but rather on the assumption that a richer China would be freer, more open China.  Maybe that will happen one day, but not anytime soon.”

The assumptions made by both Democratic and Republican administrations in that China would become more open and freer and would join the liberal democratic order established by the Bretton Woods agreement and maintained by the United States for over seventy years.

China under President Xi Jinping has embarked on a state policy of not only competing with the United States, but to dominate in all key technological areas.

The “Made in China 2025” is a strategic plan instituted by the Chinese Communist Party that China seeks to move away from being the world’s factory for cheap products but has a stated policy of dominating in all aspects of high technology.

Barr in his remarks mentioned that, “Made in China 2025 is the latest iteration of the PRC’s state-led, mercantilist economic model.  For American companies in the global marketplace, free and fair competition with China has long been a fantasy.  To tilt the playing field to its advantage, China’s communist government has perfected a wide array of predatory and often unlawful tactics: currency manipulation, tariffs, quotas, state-led strategic investment and acquisitions, theft and forced transfer of intellectual property, state subsidies, dumping, cyberattacks, and industrial espionage.  About 80% of all federal economic espionage prosecutions have alleged conduct that would benefit the Chinese state, and about 60% of all trade secret theft cases have been connected to China.”

Far too long America has taken the wrong approach with China, and far too long there was ample evidence of China playing to the Confucius proverb of, “There cannot be two suns in the sky, nor two emperors on the earth.”  China’s goal is to supplant the United States as the dominate superpower, with the global world order dictated by Beijing not America.

Renowned China Expert Michael Pillsbury, Director of the Center on Chinese Strategy, Hudson Institute, Washington, D.C., highlights China’s goal of replacing the U.S. as the dominate world power in the book he authored, “The Hundred-Year Marathon China’s Secret Strategy to Replace America as the Global Superpower.”

In this article Barr references how “China’s communist leaders lured American business with the promise of market access, and then, having profited from American investment and know-how, turned increasingly hostile.  The PRC used tariffs and quotas to pressure American companies to give up their technology and form joint ventures with Chinese companies.  Regulators then discriminated against American firms, using tactics like holding up permits.  Yet few companies, even Fortune 500 giants, have been willing to bring a formal trade complaint for fear of angering Beijing.”

Early this month when speaking to the Hudson Institute, Director of the FBI Christopher Wray stated, “We’ve now reached the point where the FBI is opening a new China-related counterintelligence case about every 10 hours. Of the nearly 5,000 active FBI counterintelligence cases currently underway across the country, almost half are related to China. And at this very moment, China is working to compromise American health care organizations, pharmaceutical companies, and academic institutions conducting essential COVID-19 research.”

Far too often both Democrat and Republican leaders have had the mistaken belief that China would become more Democratic and less authoritative and join the liberal world order.  This hasn’t happened, as China has become more authoritative!

The question left unanswered is how this will play out in the 2020 presidential election?  Trump has confronted China and is currently building a global alliance in countering China. This is especially meaningful after Beijing’s duplicitous handling of the coronavirus origins and its deadly impact across the globe.

What is unknown is how will Joe Biden deal with China?  Nothing on his campaign website deals with China, except his plan to re-build the U.S. supply chains so the U.S. doesn’t face this in the future.

Unfortunately Biden’s economic plan would curtail the movement of the supply chains back to the U.S. as his tax and regulatory policies would be catastrophic for investors.  The unknown is Biden has been a strong supporter of engagement with China, and has supported every decision by the U.S. toward China since 1972.  How will he be different now?

The results of the coronavirus pandemic should be a wakeup call for the United States, as China failed to warn the world about the deadly virus.  Beijing allowed hundreds of thousands of infected individuals to travel abroad creating a global pandemic.  After all this China placed new export restrictions on all primary protective equipment to the U.S. further compounding the effects of the virus.

As Barr mentions “The United States as a whole now relies on the PRC for many vital goods and services.  The COVID-19 pandemic has shown a spotlight on that dependency.  For example, China is the world’s largest producer of certain protective equipment, such as face masks and medical gowns.  In March, as the pandemic spread around the world, the PRC hoarded the masks for itself, blocking producers — including American companies — from exporting them to other countries that needed them.  It then attempted to exploit the shortage for propaganda purposes, shipping limited quantities of often defective equipment and requiring foreign leaders to publicly thank Beijing for these shipments.”

We are now realizing to our detriment that over 80% of all medication is sourced and manufactured in China.  Anytime Beijing wants to halt shipments of needed medical pharmaceutical medicine it can.  Currently, the Trump administration is trying to change this.

This also includes various rare earth materials which are imported from China that are crucial to manufacturing of hi-tech components.  Like everything else Beijing does they could cut exports of these key materials as they did to Japan in 2010 over the disputed islands in the East China Sea.

The biggest takeaway from Barr’s speech at the Gerald R. Ford Presidential Museum is the complicity of American businesses who routinely acquiesce to Chinese demands without protest all for short-term profits.

As Barr stated, “If you are an American business leader, appeasing the PRC may bring short-term rewards.  But in the end, the PRC’s goal is to replace you.  As a U.S. Chamber of Commerce report put it, “[t]he belief by foreign companies that large financial investments, the sharing of expertise and significant technology transfers would lead to an ever opening China market is being replaced by boardroom banter that win-win in China means China wins twice.”

This policy of U.S. businesses acquiescing to China extends to American universities as Military Historian Victor David Hansen at the Hoover Institute remarked in the fall of last year, “Universities cashed in too, both by setting up lucrative satellite campuses in China and admitting tens of thousands of Chinese citizens. These Chinese students paid full tuition (and sometimes premiums and surcharges), turning once cash-strapped campuses into profitable degree mills.”

It’s interesting to note as Barr spoke about, “In the year 2000, when the United States normalized trade relations with China, President Clinton hailed the new century as one in which “liberty will be spread by cell phone and cable modem.”  Instead, over the course of the next decade, American companies, such as Cisco, helped the Communist Party build the Great Firewall of China — the world’s most sophisticated system for Internet surveillance and censorship.”

Barr continues to mention the duplicitous nature of U.S tech companies by stating, “For example, Apple recently removed the news app Quartz from its app store in China, after the Chinese government complained about the coverage of the Hong Kong democracy protests.  Apple also removed apps for virtual private networks, which had allowed users to circumvent the Great Firewall, and eliminated pro-democracy songs from its Chinese music store.  Meanwhile, the company announced that it would be transferring some of its iCloud data to servers in China, despite concerns that the move would give the Communist Party easier access to e-mails, text messages, and other user information stored in the iCloud.”

One of the most disturbing comments Barr made in his speech that has national security implications is how tech companies refuse to assist in helping against international terrorism.

This one statement by Barr is all we need to know where these companies’ loyalties lie, “Recently, we were able to get into two cell phones used by the Al-Qaeda terrorist who shot eight Americans at the Pensacola Naval Air Station.   During the gun fight with him, he stopped, disengaged, put his cell phones down and tried to destroy them, shooting a bullet into one of his two cell phones and we thought that suggested that there may be very important information about terrorist activities in those cell phones.  And for four and a half months we tried to get in, without any help at all from Apple.  Apple failed to give us any help getting into the cell phones.  We were ultimately able to get in through a fluke that we will not be able to reproduce in the future, where we found communications with Al-Qaeda operatives in the Middle East up to the day before the attack.  Do you think when Apple sells phones in China that Apple phones in China are impervious to penetration by Chinese authorities?  They wouldn’t be sold if they were impervious to Chinese authorities.  And what we’ve asked for is a warrant – when we have a warrant from a court – we should be able to get into the cellphones.  That’s the double standard that has been emerging among American tech companies.”

Someday if the U.S. doesn’t wake up the quote by Vladimir Lenin will ring true, “The Capitalists will sell us the rope with which we will hang them.”