Skip to content
Home » Foreign Policy » Nearly 12,000 US Troops Will Pull Out of Germany at Cost of Billions, SecDef Says
Previous Next

Nearly 12,000 US Troops Will Pull Out of Germany at Cost of Billions, SecDef Says 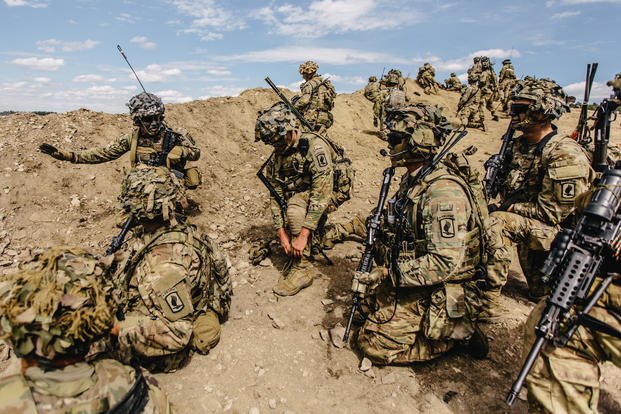 Nearly 12,000 U.S. troops will be withdrawn or repositioned from Germany, with more than half of them returning to the U.S., under a long-term plan aimed at strengthening NATO’s eastern flanks against Russia, Defense Secretary Mark Esper said Wednesday.

He gave no overall timetable for when the pullout would begin or be completed, but said some units could start moving “within weeks” while the withdrawal of others will depend on working out agreements with allies.

However, “no moves will take place without thorough communication with our people” affected by the withdrawals and with Congress, Esper said.

Last month, President Donald Trump directed that 9,500 troops be withdrawn from Germany, but Esper said the overall strategy requires the pullout and repositioning of 11,900, reducing the number of U.S. service members in Germany to about 24,000.

Of the 11,900 troops, about 6,400 will eventually return to the U.S. and the rest will be repositioned in other NATO countries, with an emphasis on Poland, the Baltic states and the Black Sea region to shift NATO’s force posture more to the east, Esper said.

The bulk of the troops returning to the U.S. will consist of the 4,500 members of the Army‘s 2nd Cavalry Regiment, a Stryker unit now garrisoned in Vilseck, Germany, he added.

Esper said an unspecified fighter squadron and elements of a fighter wing now stationed in Germany will be moved to Italy.

In addition, the Army’s newly established 5th Corps headquarters is slated to move into Poland, and other units are being considered for stationing in Poland and the Baltic states, he continued.

The 2,500 airmen now stationed at the U.K.’s RAF Mildenhall, who had been scheduled to reposition to Germany, will now stay put, Esper said.

He had no immediate figures for the costs of the withdrawal, but said it could be in the “single digit” billions.

Esper said the Defense Department will rely on the service branches to “assure the stability” of military families who will be making permanent change-of-station moves under the sweeping reorganization, adding that the families will be “informed well in advance” of any moves.

The SecDef outlined the plan at a Pentagon briefing with Air Force Gen. John Hyten, vice chairman of the Joint Chiefs of Staff, and Air Force Gen. Tod Wolters, who doubles as NATO supreme commander and head of U.S. European Command.

Under the plan, Wolters said his own EUCOM headquarters will move from Stuttgart, Germany, to Supreme Headquarters Allied Powers Europe (SHAPE) in Mons, Belgium. He added that EUCOM’s Special Operations Command headquarters in Stuttgart will also move to Mons.

Esper said the headquarters of U.S. Africa Command, which currently has about 2,000 personnel in Stuttgart, Germany, will also likely be moved to Belgium, although a final location has yet to be determined.

Wolters said the plan calls for at least two Army battalions now stationed in Germany to move to Italy. He did not give a date but said the first to move will be the 52nd Civil Engineering Battalion.

The demands for deterrence in Europe require speed of movement, which could better be handled by rotational forces coming from the U.S., Wolters said, adding, “This realignment allows us to favorably deter against Russia.”

The Germany pullout has triggered bipartisan criticism from Congress, with Sen. Mitt Romney, R-Utah, calling it a “gift” to Russian President Vladimir Putin. But Hyten said the plan to rely more on rotational forces going to Europe from the U.S. will boost the unpredictability of the overall deterrent.

The plan will result in a better alignment of NATO and EUCOM forces and “provide Gen. Wolters increased ability to dynamically deploy his force,” Hyten said.

Hyten and Esper sought to portray the pullout plan as part of a long-term review of the posture of all the combatant commands, although Trump in announcing the withdrawal directive last month said it was aimed at Germany’s refusal to spend more on national defense.

Esper said that Trump’s announcement had “accelerated” Pentagon planning “to reduce our footprint in Germany. We are still retaining a little more than 24,000 troops in Germany, which is still a lot, and more than any other country in Europe.”

The number of U.S. troops in Europe has “changed many times” over years, Esper said, and “we’re now at another one of those inflection points in NATO’s history.”

He added that Germany is one of the wealthiest countries in Europe “and should pay more for its defense.”

Planning for withdrawals from Germany began well before Trump gave the order in June, Esper said.

“We began this process actually several months ago when I gave EUCOM direction to begin looking at ways to improve our force disposition in NATO,” he said. “I’m telling you that this is going to accomplish what the president [ordered] with regard to getting us down to a lower number in Europe, and it meets those other objectives I laid out with regard to the strategic piece.”

At a June 24 White House meeting with Polish President Andrzej Duda, Trump said that some of the U.S. troops withdrawn from Germany would return to the U.S. and some would go to Poland.

“They could be, but right now there are no plans to do so,” he said.

— Richard Sisk can be reached at Richard.Sisk@Military.com.