Skip to content
Home » Foreign Policy » After 2 Elections and 3 Tries, Israel Is No Closer to Forming a New Government
Previous Next

After 2 Elections and 3 Tries, Israel Is No Closer to Forming a New Government 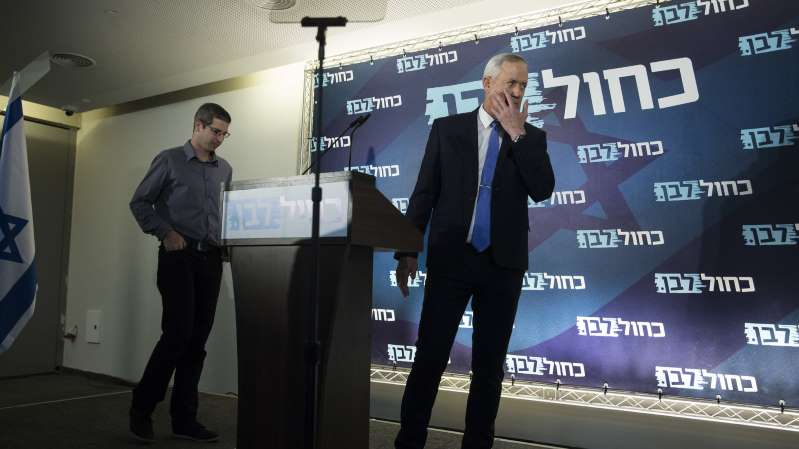 After two deadlocked elections and three failed attempts at forming a government, Israel’s yearlong political paralysis was no closer to a cure on Wednesday, as Benny Gantz, the centrist military leader who had tried to dislodge Prime Minister Benjamin Netanyahu from power, angrily admitted he had not succeeded.

Mr. Gantz’s acknowledgment hours before a midnight deadline propelled a deeply divided Israel into a new, uncharted phase of political chaos and increased the likelihood that the country would be forced to hold a third election.

Mr. Gantz, of the Blue and White party, named for the national colors, informed Israel’s president, Reuven Rivlin, that he was returning the mandate to form a government, and then delivered a lengthy denunciation of Mr. Netanyahu in a televised news conference.

Directly addressing the prime minister repeatedly, Mr. Gantz lambasted Mr. Netanyahu for insisting on maintaining his “extremist” right-wing, ultrareligious bloc instead of trying to build a unity government from the center. And he accused Mr. Netanyahu of trying to foment a “civil war” by scapegoating Arab lawmakers.

Both Mr. Gantz and Mr. Netanyahu sought to disavow responsibility for pushing the country toward a third election which, financially, will cost Israel more than $750 million, equal to about a third of its current budget deficit, as well as the economic loss of giving the country a day off.

“I was prepared to make radical concessions in order to form a stable and unified government,” Mr. Gantz said. “If you had only known the depth of this willingness, some of you might be angry with me. But the good of Israel comes first, above any other consideration.”

For his part, Mr. Netanyahu, in a video posted on Twitter, insisted that he was “willing without preconditions to enter immediate discussions with you, even tonight, to form a unity government.”

But he insisted that Mr. Gantz’s failure was his alone, and accused him of having been willing even to align with Arab lawmakers, whom Mr. Netanyahu called “terror supporters.”

Israel has been stuck in political limbo since April, when the first of two inconclusive elections was held. The second took place in September.

In both elections, Mr. Gantz and Mr. Netanyahu emerged neck and neck, each falling well short of a majority. Each was given a chance to assemble a majority coalition and failed.

At this point, there is no presumption that a third vote would produce a significantly different outcome.

The charge of forming a government now goes to Israel’s Parliament, which will have 21 days to come up with a candidate — any candidate, including Mr. Netanyahu or Mr. Gantz — who could command a 61-seat majority in the 120-seat house.

Mr. Gantz called that period “21 vital days in which Israeli democracy will be put to its greatest test.” He urged Mr. Netanyahu to put self-interest aside.

If that final stage, which Israel is entering for the first time in its history, also fails to produce a government, Parliament would be dissolved and Israel would start preparing for its next election, most likely in the spring.

Both Mr. Netanyahu, Israel’s longest-serving prime minister and leader of the conservative Likud, and Mr. Gantz, a centrist and relative political newcomer, have said they wanted to join forces in a broad government of national unity based on their two large parties.

But they have failed to agree on a power-sharing arrangement.

The negotiations have been complicated by, among other things, Mr. Netanyahu’s legal situation. He is facing possible indictment in three graft cases involving allegations of bribery, fraud and breach of trust.

Mr. Gantz has said he would join a unity government with Likud, but that he would not serve under a prime minister facing indictment. Likud has insisted that Mr. Netanyahu is its leader and has refused to entertain the idea of a governing coalition without him at the helm.

Recent talks have focused on a deal in which the two men would rotate the premiership, but they could not agree on the terms.

Mr. Gantz’s only other option for forming a government was doomed earlier Wednesday.

There had been speculation that he could form a narrow, minority government without Mr. Netanyahu and his right-wing and ultra-Orthodox allies. Such a coalition would have required the support of Arab parties and Avigdor Liberman’s ultranationalist Yisrael Beiteinu party.

On Wednesday, Mr. Liberman ruled out any prospect of going along with that plan. At a news conference, he described the Arab politicians as an anti-Zionist “fifth column.”

A former coalition partner of Mr. Netanyahu’s, Mr. Liberman also rejected returning to a narrow government with Mr. Netanyahu and his ultra-Orthodox allies, describing them, too, as increasingly anti-Zionist.

The first election, in April, gave Mr. Netanyahu an advantage, but he failed to assemble a majority coalition, prompting a second election.

In the September election, Mr. Gantz’s Blue and White party won 33 seats, edging ahead of Mr. Netanyahu’s Likud, which won 32. But Mr. Netanyahu secured the endorsements of 55 right-wing and religious members of Parliament for the premiership, one more than Mr. Gantz did, and he was given the first chance to try to form a government.

When he failed, Mr. Gantz was then given four weeks to try.

A major sticking point in the negotiations for a unity coalition was Mr. Netanyahu’s insistence that he go first as prime minister under any rotation agreement.

Taking the leadership role first was important to Mr. Netanyahu because if he held any post lower than prime minister, he would have to resign immediately if indicted. As prime minister, current Israeli law would allow him to remain in office until a final court verdict, after appeals have been exhausted, a process that could take years.

That was a non-starter for most of the Blue and White leadership. The party had repeatedly pledged to its voters not to serve in a government under a prime minister facing a serious indictment.

In addition, Mr. Netanyahu insisted on bringing his entire right-wing, religious bloc of 55 members of Parliament into any coalition, over Blue and White’s vehement objections.

The talks for a unity government meant to heal national rifts took place in an atmosphere of unfettered divisiveness.

Mr. Netanyahu accused Mr. Gantz of having plotted all along to form a narrow government with the support of Arab members of Parliament, and described such a government as “dangerous for Israel.” Netanyahu critics denounced the prime minister’s rhetoric as racist, saying it incited violence.

For his part, Mr. Gantz condemned Mr. Netanyahu’s alliance with right-wing and ultra-Orthodox parties as an “immunity bloc,” meant to try to provide him with parliamentary protection from prosecution.