Skip to content
Home » U.S. Politics » Winners and Losers from the November Democratic Debate
Previous Next

Winners and Losers from the November Democratic Debate 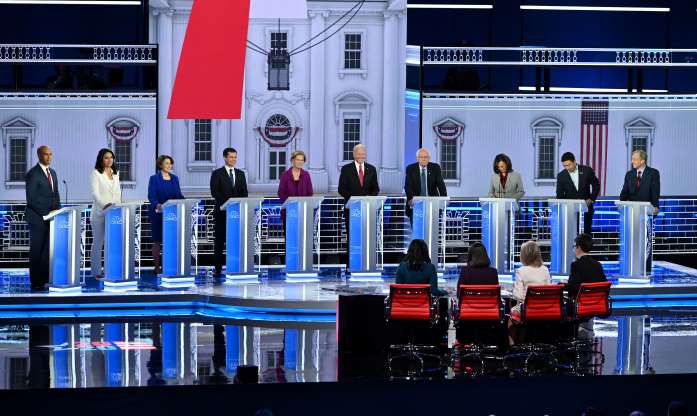 The Democratic presidential candidates momentarily sidelined the impeachment inquiry on Wednesday night, when they met in Atlanta for the November MSNBC-Washington Post debate.

Below are some winners and losers.

Pete Buttigieg: Buttigieg has been good in the debates, and now he’s got real momentum in the first contest in Iowa, where a Des Moines Register-CNN poll showed him up nine points there last week. The question has been how he would handled the newfound pressure — and answer questions about whether a young, small-town mayor has the gravitas to win the presidency. “We need somebody who can go toe-to-toe who actually comes from the kinds of communities that {Trump has] been appealing to,” he said, adding: “I know that from the perspective of Washington, what goes on in my city might look small. But frankly, where we live, the infighting on Capitol Hill is what looks small.” On a night he seemed likely to be the target of many rivals’ attacks his most tense back-and-forth was with Rep. Tulsi Gabbard (D-Hawaii). That’s about the best he could have hoped for, given her limited constituency in the Democratic Party.

Amy Klobuchar: She’s shown perhaps less momentum in Iowa, but she’s rising slightly. And in a key moment, she turned what could have been a dicey question — about her suggestion that a woman with Buttigieg’s experience wouldn’t make the debate stage — into a crowd-pleasing response about a female president. She said Buttigieg was qualified, but, “Women are held to a higher standard; otherwise, we could play a game called Name Your Favorite Woman president.” Then she brought the house down with this: “If you think a woman can’t beat Donald Trump, Nancy Pelosi does it every single day.”

Marijuana: It took most of the debate, but Sen. Cory Booker (D-N.J.) ultimately seized upon an issue that was there for the taking: marijuana legalization. Former vice president Joe Biden said recently that he wasn’t ready for it because it might be a “gateway drug.” Booker responded, “I thought you might have been high when you said it. … Marijuana has already been legal in our country for privileged people.” Given the fast-rising popularity of legalization, especially in the Democratic Party, Booker could do worse than becoming the face of that effort in the Democratic primary. And at this point, he needs to build a constituency for his struggling campaign.

The wealthy: Don’t look know, but the wealthy are suddenly getting a little bit of defense on that debate stage. The first big confrontation came when Booker differed with Sen. Elizabeth Warren (D-Mass.) on her 2 percent wealth tax on the top one-tenth of 1 percent of income. Booker said he sympathized with the goal of creating more revenue and a fairer tax code, “But the tax the way you’re putting it forward, I’m sorry, it’s cumbersome. It’s been tried by other nations. It’s hard to evaluate.” It was an interesting choice from Booker, who has been criticized as being too close to corporate interests. Later in the debate, billionaire Tom Steyer was asked to respond to the idea that he has bought his way into these debates by spending tens of millions of dollars of his own money. Businessman Andrew Yang responded, “I want to stick up for Tom,” he said, adding: “Tom has been spending his own money fighting climate change. You can’t knock someone for having money and spending it in the right way.” Steyer seemed positively surprised someone would defend him, and given the substance of these debates, you couldn’t really blame him.

A delayed clapback: Back in July’s debate, Gabbard attacked Harris, and Harris didn’t really hit back. Apparently she was ready this time. After Gabbard attacked the modern Democratic Party and Hillary Clinton for its foreign policy, Harris hit back — hard. “I think that it’s unfortunate that we have someone on the stage who is attempting to be the Democratic nominee for president of the United States, who during the Obama administration spent four years full time on Fox News criticizing President Obama,” she said. She said Gabbard “buddied up” to Stephen K. Bannon to get an audience with Trump and that she “fails to call a war criminal” — Syrian President Bashar al-Assad, whom Gabbard controversially met with — “what he is.” That said, Gabbard seems to be walking right into this, so she was arguably getting what she wanted.

Joe Biden: His shaky debate performances haven’t really cost him thus far, but that doesn’t change the fact that they are almost unfailingly shaky. Even in his first answer, which was basically a recitation of his usual talking points about why he would be the best Democratic nominee, he stumbled through it. Later, after Klobuchar’s Buttigieg answer, he assured awkwardly, “I think a woman is qualified to be president.” At another point, while talking about violence against women, he said we need to “keep punching at it and punching at it and punching.” Eek. Late in the debate, he played up his African American support, saying he was supported by the “only African American woman that had ever been elected to the United States Senate,” Carol Moseley-Braun (D-Ill.). Except he was standing a few people down from another one, Harris (which she and Booker were happy to point out). Biden insisted he had said the “first” black female senator, but he was wrong.

The “just beat Trump” ethos: On a day in which President Trump’s Ukraine scandal took a serious turn — thanks to his European Union Ambassador Gordon Sondland implicating multiple top administration officials and saying the Ukraine effort was undertaken on Trump’s behalf — the debate actually included plenty of talk about how the party needs to not focus so much on Trump. “We cannot simply be consumed by Donalld Trump,” Sen. Bernie Sanders (I-Vt.) said, ticking off important issues like health care, climate change and homelessness, “What the American people need to understand is that Congress can walk and chew bubble gum at the same time.” Buttigieg also emphasized, as he has before, that the party needs to vote according to what happens after the “tender” moment when Trump is gone. Added Sanders later: “We need to bring our people together not just in opposition to Donald Trump.”

Tulsi Gabbard: It wasn’t just her odd strategy to continually attack Clinton and the Democratic Party more broadly. At one point, she was asked about FBI Director Christopher A. Wray saying most domestic terrorism these days is fueled by white supremacism. She didn’t really have an answer, eventually landing on the “failed war on drugs” hurting African Americans. Yang quickly followed up with a strong answer about how he learned from a former white supremacist, Christian Picciolini, that he personally spoke to. Gabbard clearly has a plan here; that doesn’t mean it’s the right one.