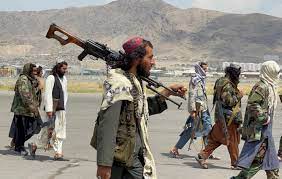 The entire evacuation of U.S. troops, civilians and Afghans has been a debacle from the very beginning, but compounding the chaos was the killing of 13 American military personnel, 90 Afghans killed plus scores wounded, by an Islamic State affiliate, called ISIS-K who is now planning additional attacks even after the evacuation of American civilians.

The continued terror threat had impacted the entire evacuation of all personnel at the Kabul airport and further elevates that terrorism will get substantially worse as President Biden just embolden global terror as they defeated the United States. This disaster by President could have been avoided.

In April when President Biden first announced that he was withdrawing all U.S. military forces from Afghanistan by repeatedly stating he was following the agreement first agreed to by President Trump in February 2020.

Trump’s agreement with the Taliban was conditional based, based on three premises that they would have to accept the legitimacy of the Afghan government and enter into a coalition form of governance. Finally they would have to renounce any support for Al-Qaeda, and not attack any American’s.

The final caveat would be that the Taliban and the Afghan government would have to begin discussing setting up how governance would like for the country, but unfortunately this never happened.

Since the Taliban never lived up to the agreement Biden was under no obligation to adhere to its professions, even Trump rejected the agreement because the Taliban never fully complied. Why would Biden follow the complete letter of this agreement when he rejected and overturned every other Trump policy? Was this an excuse that gave him coverage since he always wanted to withdraw no matter the conditions on the ground, or listen to alternate information he was presented with?

Why didn’t violence erupt on Trump’s watch instead of Biden’s?

Missing in the media coverage was whenever the Taliban strayed from the agreement; they were met with a swift military response by the Trump administration. President Biden was under no obligation to honor the agreement because the Taliban never lived up to its parameters.

The original date for American troop withdrawal per the agreement with the Taliban was May1st.  Once Biden assumed the presidency this past January, he ordered a review of the agreement and in April, announced a four month postponement to September 11th, but the optics of a US pullout and the commemoration of the 20th anniversary of the 9/11 attack would be bad public relations for the administration so it was moved back to August 31st.

The deadline was extended to give the Afghan government additional time to establish itself in its fight against the Taliban, and for the U.S. to hand over previous U.S. military bases to Afghan forces to include giving them tactical military equipment.

Even when speaking at the White House East Room in July, Biden stated the Afghan military can defend itself against the Taliban; this was at a time of major advances by the Taliban.

The intelligence agencies were very dubious that Afghan military forces could resist an all-out assault by the Taliban, or if in fact the government could even hold on to capital city of Kabul.

During this period, U.S. forces abandoned the Bagram air base just north of Kabul, in the dead of the night without even warning Afghan military forces of the pullout. Many Afghan troops felt demoralized by the move and rationalized that the situation is far worse if America vacated its prized and most important military base.

Then on Thursday, President Biden essentially through his generals under the bus blaming them for the for the Bagram pullout. Biden stated, “They concluded—the military—that Bagram was not much value added, that it was much wiser to focus on Kabul,” he said. “And so, I followed their recommendation.” What Biden conveniently left as he addressed the American people that the President sets the constraints under which the military draws up any and all contingency plans and evaluates all options. When briefing the president, the military commanders base it on the troop strength they had not what they wanted, so of course they accepted the closure of Bagrum, because they couldn’t defend both.

Even at a briefing a week before the deadly attack, General Mark Milley, Chairman of the Joint Chiefs of Staff, said that securing Bagram took “a significant level of military effort,” and “our task given to us at that time, our task was to protect the Embassy in order for the Embassy personnel to continue to function.” As a result, he added, “we had to collapse one or the other.”

If the president refused additional forces or the military had to draw down to meet a prescribe troop level set by the president, the Pentagon had no choice but to defend what they could with the resources they had and that was the embassy.

With the U.S. departure of U.S. forces from Afghanistan, Biden stopped at nothing that would change the trajectory of leaving the country to include abandoning Bagram airbase, refusing to set military safe zones, or retrieve stranded Afghan allies, but especially leaving thousands of Americans behind. President Biden’s disastrous decision was based on politics, as this was happening when the Taliban were rapidly advancing across the country.

The president’s decision created the bottleneck of civilians including American’s pouring into the Kabul airport desperate to flee the advance of the Taliban from which it required the reentry of U.S. forces back into Afghanistan thus placing American troops in a dangerous position.

Unfortunately, Thursday, President Biden gave a far different explanation then the one he conveyed to the American public during his remarks while paying tribute to the 13 military personnel who gave their lives to a terror attack at the Kabul Airport.

During his address to the nation regarding the deaths of 13 U.S. service personnel, the president was not honest with the American people on why U.S. troops were in such a difficult position.

At first when the president ordered all U.S. forces, two source’s I have one at U.S. Central Command who has overall responsibility for all combat operations in the Middle East region to include Afghanistan, the other source is assigned to a senior level position at U.S. Special Operations Command. Both stated that a request was made by CENTCOM that they wanted to evacuate all Americans before departing Afghanistan and sent a request to the military command authority. This went to the Secretary of Defense Lloyd Austin and President Biden. Who turned down the request?

The current evacuation took place at a civilian urban airport and for some strange reason that perplexes me is why were we having perimeter security being provided, unbelievably, by the Taliban. Why do we even trust the Taliban, considering we have been fighting them for the past twenty years, so why is the Biden administration and military commanders trusting them?

All these decision contributed to the deaths of the 13 U.S. military personnel, and this whole entire situation has been a complete disaster by the entire American national security establishment to include senior military commanders.

Now that the last American troop has left Afghanistan, and after 20 years of war, America’s longest war is now officially over. The reason we went to Afghanistan was to punish those responsible for September 11th, namely Al-Qaeda and the Taliban who harbored them.

We now leave with the Taliban back in charge, armed with $80 billion in U.S. weapons and Al-Qaeda firmly cemented in Afghanistan. The disastrous policy by the Biden administration, instead of making America more secure it has made America less and alienated the U.S. from its core allies. The world is now less safe and America has never been less trusted, even are closest ally England refuses to engage in any military operations with the U.S. especially as long as President Biden is President!

Instead of stopping terrorism we just rearmed a terror organization and embolden every other international terror group!