Skip to content
Home » U.S. Politics » Winners and Losers From the Nevada Democratic Debate
Previous Next

Winners and Losers From the Nevada Democratic Debate 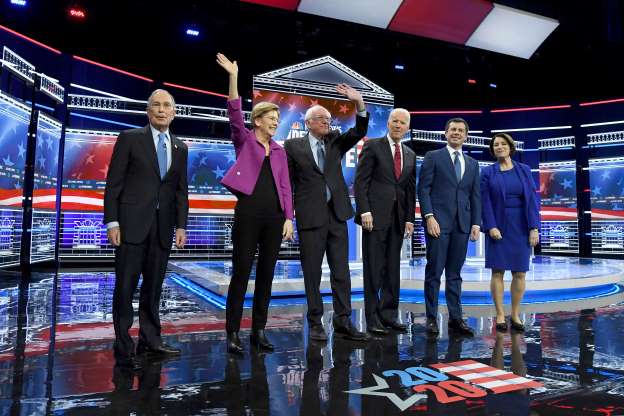 The Democratic presidential candidates took part in a debate in Nevada on Wednesday, just days before the Democratic caucuses there. Former New York mayor Mike Bloomberg made his debut on the stage as he rises in polls across the country.

Below, some winners and losers.

Bernie Sanders: You wouldn’t have thought from watching the debate that Sanders was the one threatening to open up a potentially insurmountable delegate lead in the weeks ahead. Instead, the candidates focused mostly on Bloomberg and arguably landed tougher attacks on each other than on Sanders.

Sanders did have to defend himself on some sticky subjects, including his refusal to provide more medical disclosure after a heart attack he suffered last year. He was also forced to respond to the Culinary Workers Union’s criticism of him for wanting to supplant their private health insurance with Medicare-for-all. But there was pretty much nothing to suggest Sanders’s momentum in this race would change. He’s the favorite in Nevada, and thanks to the other infighting we saw Wednesday night, that seems likely to continue.

Warren’s takedowns of Bloomberg: There was a time in this race when Elizabeth Warren clashed with Sanders. On Wednesday, she did him a massive favor by taking a chain saw to Bloomberg. She jumped in early, throwing out some derogatory quotes about women — “fat broads” and “horse-faced lesbians” — and then pointing out they weren’t said by President Trump, but instead reportedly by Bloomberg. We can’t “substitute one arrogant billionaire for another,” she said. Later, she attacked Bloomberg’s apology for his stop-and-frisk policy, which disproportionately targeted minorities. “This isn’t about how it turned out; this is about what it was designed to do to begin with,” Warren said. “It’s targeted black and brown men from the beginning.” And then she went after Bloomberg for not sufficiently addressing the treatment of women at his companies. “And I hope you heard what his defense was: ‘I’ve been nice to some women,’ ” Warren said, before pressing Bloomberg to release women from nondisclosure agreements. Others piled on, and Bloomberg didn’t have much of an answer for any of it.

Warren reserved some attacks for another of Sanders’s leading opponents, Pete Buttigieg. The camera wasn’t on Sanders during these exchanges, but he must have been smiling at what his former-and-apparently-current-again ally was doing for him.

The moderators: At the start, “NBC Nightly News” host Lester Holt told the candidates that they were encouraged “to directly engage with each other on the issues.” The candidates heeded that. At times, it risked getting out of hand, with the candidates exploiting what seemed to be a free-for-all. But they ironed it out, and the result was the most substantive debate with by far the most contrasts to date. And that’s what debates should be about: competing visions and arguments.

Bloomberg: The mayor doesn’t have much experience debating. His last one was back in 2009 — a one-on-one matchup in a race where he was a heavy favorite. This one was a different animal, and it got ugly in a hurry for Bloomberg. He was the big target from the get-go. He came off as very technocratic, and he often didn’t jump in to defend himself, apparently hoping the bad moments would pass. But they persisted.

Maybe the most brutal attacks were on stop-and-frisk. Bloomberg said he had simply been wrong about the policy but that he eventually came around. That skirted the fact that he defended it well into this decade, though, and that the policy stopped not because of his personal evolution, but because of a court order. At one point, Bloomberg even seemed to be tempted to defend the motivation for stop-and-frisk, before thinking better of it. “The bottom line is that we stopped too many people,” Bloomberg said. “But the policy — we stopped too many people.”

A rare punch that seemed to land for Bloomberg was when he took on Sanders for saying there shouldn’t be billionaires. “I can’t think of a way that would make it easier for Donald Trump to get reelected than listening to this conversation,” Bloomberg said. “It’s ridiculous. We’re not going to throw out capitalism. We tried that. Other countries tried. That was called communism, and it just didn’t work.” The “communism” line maybe went too far, but it’s the contrast Bloomberg wants to draw.

Bloomberg has benefited from running hundreds of millions of dollars worth of ads largely uncontested in states where the other candidates have yet to train their focus. And on the whole, Wednesday was a baptism by fire. It’s tough to argue he didn’t get burned.

Joe Biden: If there was a bystander on the debate stage Tuesday night, it was Biden. There was nothing there to suggest he might rescue his struggling campaign. That said, he still seems well-positioned in the South Carolina primary — which follows Nevada — and maybe that gives him a fighting chance on Super Tuesday? He had better hope so.

Amy Klobuchar: She’s regularly been named a winner in these debates, but she seemed desperate and less-prepared at times Wednesday night. She had a particularly rough exchange on how she hadn’t been able to tell a reporter the name of Mexico’s president. She name-checked “President López Obrador” in the answer, but she struggled to pronounce his name correctly. Then she tried to recite other trivia about foreign leaders but stumbled, appeared to check her notes, and mustered only a last name for another Latin American president. “Who is the president of Honduras?” she said, glancing down. “Hernandez.” It was just one moment, but it wasn’t good. She also repeatedly got caught in personal back-and-forths with Buttigieg, despite neither of them being in a great position in national polls. Klobuchar needed more given where she is in this race.

Sanders’s claim about his supporters: Early in the debate, one of the chief lines of attack on Sanders was the nastiness of his supporters, particularly online. “Why is it especially the case among your supporters?” Buttigieg asked Sanders. Sanders, though, wouldn’t grant the premise. “I don’t think that’s especially the case, by the way,” he said. Any political journalist could tell you that’s the case. Sanders supporters may not have a monopoly on such tactics, but it’s 100 percent more of an issue with his supporters. And to deny there’s anything unusual about them is to skirt the issue. It plays into the idea that Sanders isn’t taking this particularly seriously.