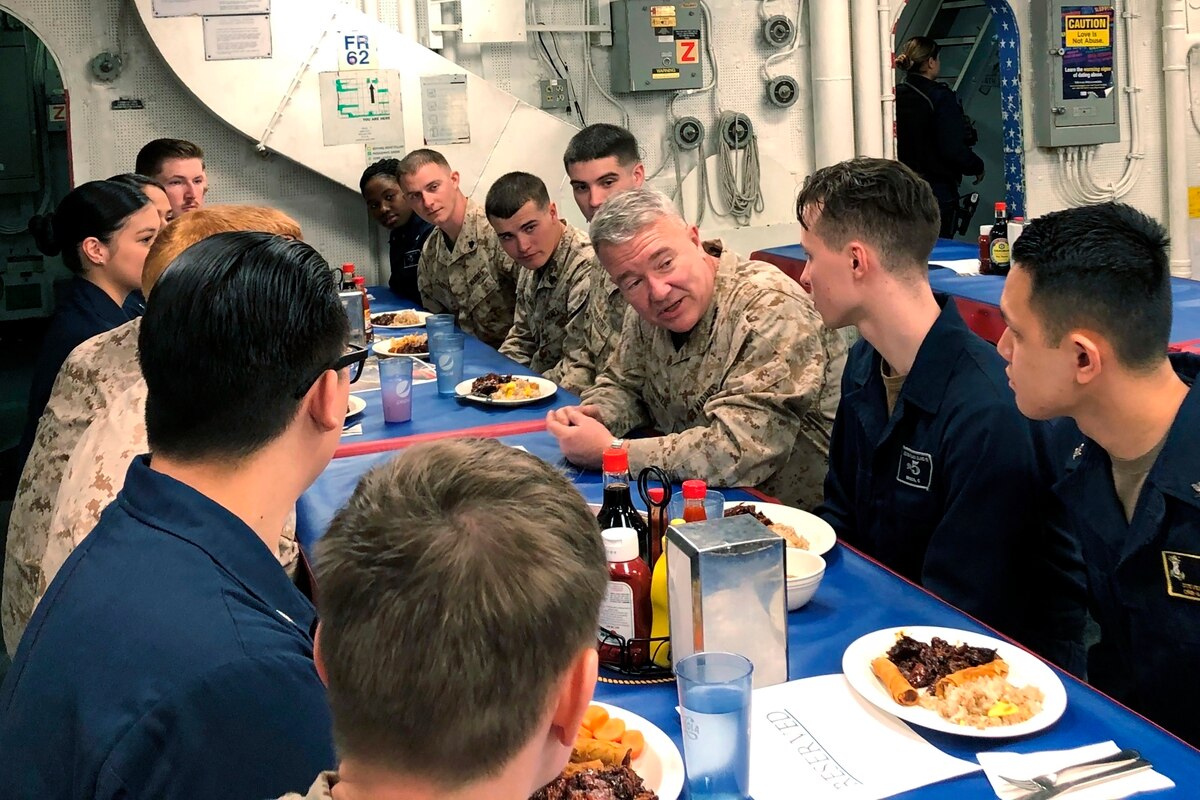 ABOARD THE USS BATAAN — Over the past eight months, the United States has poured more than 20,000 additional troops into the Middle East to counter the escalating threat from Iran that peaked with the recent missile attack on American forces in Iraq.

Despite President Donald Trump’s pledge to bring troops home, the top U.S. commander in the Middle East on Thursday said the most recent forces to enter the region could be there for “quite a while.”

“You’re here because I requested that you come,” Marine Gen. Frank McKenzie told sailors and Marines aboard the USS Bataan amphibious assault ship, his voice booming over the ship’s loudspeaker. “I’m not sure how long you’re going to stay in the theater. We’ll work that out as we go ahead. Could be quite a while, could be less than that, just don’t know right now.”

The Bataan and two other U.S. warships moved into the Middle East on Jan. 11. By Thursday, they were in the north Red Sea, roughly 50 miles south of the Sinai Peninsula. They are the latest additions to America’s troop presence in the region. Since May, their numbers have grown from about 60,000 to more than 80,000.

Those increased deployments came despite two significant hurdles: Trump’s persistent pledge to end the wars and bring troops home, and U.S. Defense Secretary Mark Esper’s insistence that U.S. forces be shifted to the Asia-Pacific as a bulwark against threats from China.

In making its case for troops in the Middle East, the U.S. military points to Iran’s Jan. 8 launch of as many as two dozen ballistic missiles at two Iraqi bases where U.S. troops were stationed. The attack was in retaliation for a U.S. drone strike that killed Qassem Soleimani, Iran’s top general.

“Iran continues to pose a very real threat,” McKenzie told reporters traveling with him to the Bataan. “I do believe that they are deterred right now, at least from state-on-state actions by our response. And so I think that while that threat remains, I think we’re in a period where they’re certainly not seeking to escalate anything.”

He added, however, that Iranian proxy forces, who may strike with or without direction from Iranian leaders, still present a threat. He noted that Iranian attacks against Saudi Arabia last fall came as a surprise.

“Iran is very hard to read,” McKenzie said. “So I would say the fact that things are quiet for a while does not mean that necessarily things are getting better.”

To help deter additional Iranian attacks, McKenzie asked to have the USS Bataan Amphibious Ready Group, which includes two other ships and a Marine Expeditionary Unit, divert from their original mission in Europe and go through the Suez Canal into the Red Sea. There are about 2,500 Marines and 1,500 sailors on the three ships.

That decision is the latest move since May to bolster the American presence in the region, including the deployment of the 1st Brigade, 82nd Airborne division, to Kuwait and Iraq after the U.S. Embassy in Baghdad was attacked. The U.S. also moved an aircraft carrier into the region last year. It has left and was replaced the USS Harry S. Truman. The Pentagon has sent additional fighter jets, bomber aircraft, and Patriot missile batteries to Middle East to provide additional security for U.S. troops and allies and as a show of force to deter attacks by Iran.

Those moves have increased the U.S. troop strength in the region to more than 83,000, based on numbers from several U.S. officials and other government agencies that track military movements.

Asked about the increase, McKenzie said he understands the demand for troops in other parts of the world, and he has had discussions with Esper about the level of risk in the Middle East.

Esper, who has approved the moves, is looking closely at worldwide deployments in a broader effort to meet the needs of the national defense strategy that identified China and Russia as the key future threats. Even as McKenzie was traveling to the Bataan, Esper was in Florida telling reporters that Russia and China are “mission number one.”

“There’s only a finite number of dollars, a finite number of troops, so I’ve got to figure out, where is the best place to put them? I’ve articulated in the past that I want to either return forces to the States to improve their readiness, or redeploy others” to the IndoPacific, Esper said.

Trump has argued that the U.S. must get out of the “endless wars” in the Middle East. But he has also singled out Iran as a malign influence in the region, and after the Iranian missile strikes, was quick to threaten revenge.

After hundreds of Iranian-supported militiamen breached the U.S. Embassy in Baghdad in early January, Trump tweeted, “They will pay a very BIG PRICE! This is not a Warning, it is a Threat. Happy New Year!” Trump also approved the airstrike on Soleimani, which triggered the Iranian reprisal. Some U.S. troops were flown out of Iraq for evaluation of concussion-like symptom after the missile strikes.

Senior U.S. officials have noted the relative calm after the Iranian strikes, saying both the U.S. and Iran want to deescalate tensions.

But McKenzie said that while the U.S. wants to be “coolheaded,” he worries that cooler heads may not prevail in Iran.

So when he went to the microphone on the Bataan, where Marine Harrier jets intermittently roared down the ship’s deck into the air, he issued a warning.

“You need to be ready because I may need to employ you on very short notice and on some very difficult missions,” he said.