Skip to content
Home » U.S. Politics » Trump tests patience of political allies in his approach to trade and tariffs
Previous Next 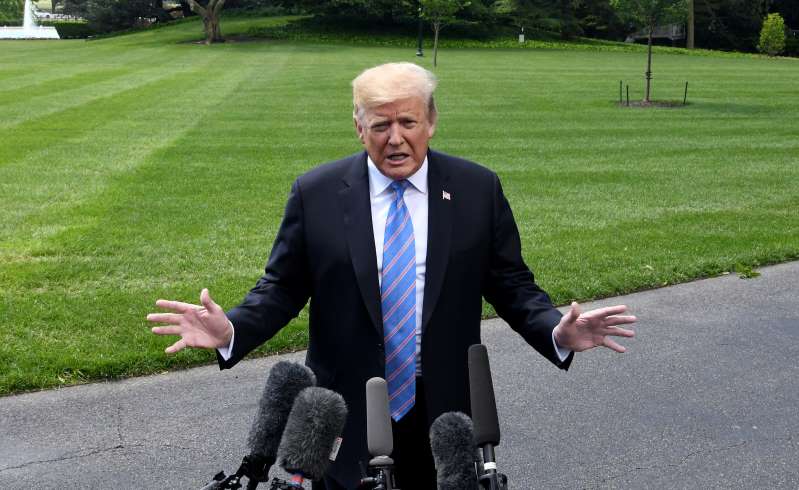 With a growing economy at his back and little resistance from Republicans, President Donald Trump has been free to impose tariffs on America’s trading partners with few political repercussions.

Yet his protectionist approach — particularly his heavy-handed tactics with China, as well as with traditional allies Canada and the European Union — presents a high-stakes gamble for him and other Republicans in the 2020 elections.

So far the president has been able to keep skeptical Republicans from rebelling by stoking his voting base and promising to subsidize soybean farmers and others hit hard by the trade conflict with China.

And Trump has bipartisan support in Congress to try to compel Beijing to change or halt policies that many in Washington see as endangering U.S. economic and security interests.

But with new tariff deadlines looming as early as Saturday, the president is testing the patience of some of his staunchest allies in Congress, many of whom have long billed themselves as opponents of trade barriers and skeptics of government subsidies meant to alter the market.

Although Trump portrays tariffs as something paid by foreign countries — and seems to believe it — Republican elected officials generally accept the evidence that U.S. consumers bear most of the cost of higher taxes on imported goods.

“We are growing tired and frustrated of hearing the up-and-down, back-and-forth of everything as it relates to China,” said Scott Henry, a third-generation Iowa farmer and spokesman for Farmers for Free Trade, a nonprofit advocacy group. “We just want to see something get done.”

Unlike Trump, who recently called tariffs “the greatest negotiating tool in the history of our country,” many Republican lawmakers see them as a tool to be used briefly if at all.

“I completely agree with what President Trump is trying to do — get China to abide by the rules — but this is high-stakes poker and I hope we win,” said Sen. Ron Johnson, a Republican from Wisconsin, which depends heavily on farming and manufacturing industries that could see significant impacts from tariffs.

A quick resolution appeared unlikely after talks broke down Friday and Trump hiked tariffs on $200 billion of imported goods on China. Beijing retaliated Monday by vowing to increase tariffs on $60 billion of American-made goods as of June 1.

At least in public, neither side showed signs of backing down Tuesday. Speaking to reporters outside the White House, Trump threatened to slap tariffs on all remaining Chinese imported goods, or another $300 billion, in what he called a “little squabble.” In Beijing, Foreign Ministry spokesman Geng Shuang said, “China will fight to the finish.”

Analysts say Chinese President Xi Jinping will never agree to certain enforceable changes that the U.S. side wants, including giving up subsidies to state-owned firms that are fundamental to China’s government-controlled economic and political system.

That leaves Trump with a painful choice, said William Reinsch, a veteran trade analyst in Washington and senior adviser at the Center for Strategic and International Studies, a nonpartisan think tank.

He can accept “a weaker agreement than he wants, in which case the Democrats will attack him for being soft and caving,” Reinsch said. Or he can leave tariffs in place indefinitely, causing higher prices for American consumers, and “Democrats will accuse him of being an incompetent negotiator, a bad closer and somebody who caused an enormous amount of short-term pain for what turned out to be no gain at all.”

Both countries say they will continue talks and have left time before the latest volley of tariffs kicks in. Trump said Tuesday he will attend the Group of 20 leaders’ summit June 28-29 in Osaka, Japan, where he is expected to meet with Xi and could resolve their trade dispute. The threat of Trump’s new tariffs will probably hang over those talks as well.

“They want to make a deal,” Trump said. “It could absolutely happen.”

Others are less sure.

“Things have escalated very quickly and we don’t know how the two sides are going to get back to the table,” said Myron Brilliant, executive vice president and head of international affairs at the U.S. Chamber of Commerce.

Economists, congressional Republicans and even some administration officials say U.S. consumers and businesses cannot escape pain from the tit-for-tat tariff fights Trump has started with China but also Canada, Mexico and the European Union.

Trump has imposed duties on steel and aluminum from Canada, Mexico and the European Union, all of which have retaliated with duties on American farm and other goods.

And Trump is weighing new taxes on imported autos from the EU, Japan and other countries on national security grounds — a decision that could come this weekend and is almost certain to spark a U.S. political backlash if Trump presses ahead with it.

“Ultimately nobody wins a trade war unless there is an agreement at the end after which tariffs go away,” said Sen. Mitch McConnell, the Senate majority leader, whose own state of Kentucky has suffered retaliatory tariffs on bourbon and tobacco. “Hopefully these tactics will lead us to that day, and if it does I think it will be a winner for both sides.”

Republican and Democratic lawmakers, as well as many policy analysts, have faulted Trump for alienating allies with tariffs when the administration could have forged a broader coalition against Chinese trade practices to increase leverage in negotiating with Beijing.

“The lone-wolf approach, after poking all the allies with sticks over steel and aluminum … has really soured a lot of countries on the U.S.,” said Daniel Ikenson, director of trade at the Cato Institute, a libertarian think tank.

So far, he noted, the harmful effects of tariffs have been cushioned by a healthy economy still getting a boost from tax cuts.

But if the economy weakens and Trump doesn’t make a good deal with China, Ikenson said, “he’s going to get hammered” by Democrats in Rust Belt states that went for Trump in 2016.

A former White House aide who spoke on condition of anonymity said even Trump’s most skeptical advisers share his view that China reneged on a potential deal. The former aide said Trump “was fired up” and appeared eager for a fight after China allegedly walked back its commitments.

Trump and his political team believe “getting tough on China and trade is something that’s pretty unifying in the country” and will view a trade war as a winning campaign message, whether or not it yields a deal.

But a long fight could hurt farming states that Trump is depending on in his 2020 reelection bid. For now, Republicans are sticking with Trump even though his moves cut against the party’s traditional policies.

“People are behind it until the day they’re not,” he said. “That’s politics, that has a lot to do with perceived strength. And that may change quickly.”

Sen. Jim Inhofe, R-Okla., said, “I’m not going to question his judgment in the aggressive nature of what he has done because every time I think that in my own mind, it turns out he’s made the right decision.”

Still, Inhofe has reservations. The farmers and agriculture supporters in his state “are concerned about this but they also have enough faith in the president — I know this isn’t true in all states, but it is in Oklahoma.”