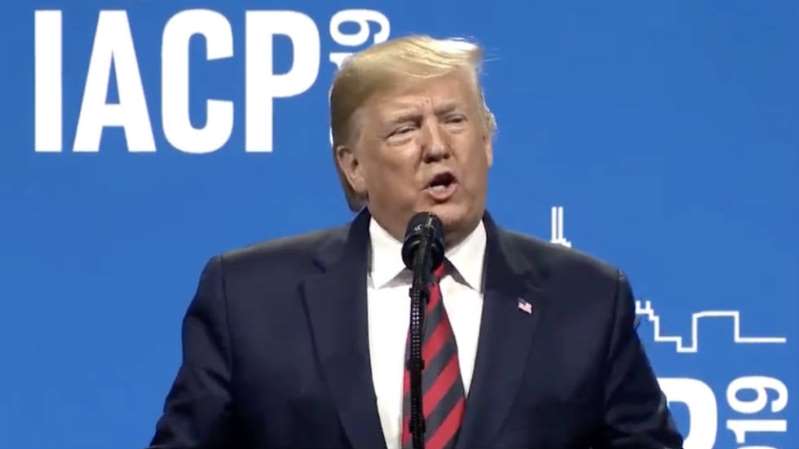 By Brett Samuels and Morgan Chalfant, The Hill–

President Trump on Monday used his first trip to Chicago as president to tear into the city and its leadership, comparing its violence to Afghanistan and blasting officials as inept and disloyal to the U.S.

The president addressed the annual conference of the International Association of Chiefs of Police, where he criticized the city’s crime rate and its policies protecting undocumented immigrants. He wasted little time blaming those issues on the city’s superintendent of police, Eddie Johnson, who boycotted the event.

“Here’s a man that could not bother to show up for a meeting of police chiefs… in his hometown and with the president of the United States. And you know why? It’s because he’s not doing his job,” Trump told the gathering of law enforcement officials.

Trump also hit Chicago over its “sanctuary city” policies, accusing Johnson of harboring undocumented immigrants at the expense of the safety of U.S. citizens and betraying his oath of duty.

“People like Johnson put criminals and illegal aliens before the citizens of Chicago, and those are his values,” Trump said. “Frankly, those values, to me, are a disgrace.”

© WhiteHouse.gov Trump blasts Chicago police superintendent in first visit to city as presidentChicago Mayor Lori Lightfoot (D) delivered opening remarks over the weekend at the police conference. But Johnson, who has been superintendent since April 2016, said he would not attend because Trump’s presence did not align with his or the city’s “core values.”

Chicago officials have been outspoken in their opposition to the Trump administration’s immigration policies. The city has branded itself a sanctuary city and pledged not to cooperate with federal immigration officials.

Trump used parts of his Monday speech to promote his immigration agenda, touting his long-sought wall along the southern border and bringing the leaders of Customs and Border Protection and Drug Enforcement Administration on stage.

Monday marked Trump’s first time in Chicago since taking office, and he was greeted by protests. He is scheduled to attend a fundraiser in the afternoon at Trump Tower along the Chicago River.

Trump has long used the city of Chicago – which voted overwhelmingly against him in 2016 – as a foil when arguing for law enforcement reforms and tougher policing. In remarks at the same conference a year earlier, in Orlando, Fla., he suggested the city implement the legally dubious practice of “stop and frisk” to cut down on crime.

On Monday, he seized on the city’s crime rate to paint it as a bastion of violence and lawlessness.

“It’s embarrassing to us as a nation,” he said. “All over the world, they’re talking about Chicago. Afghanistan is a safe place by comparison.”

“It’s true,” Trump added after some in the audience chuckled.

Gun violence has long plagued Chicago, with bursts of violence dominating headlines in the city and at times across the country. There have been 436 people killed in the city in 2019 as of Sunday, 46 fewer than at the same point the previous year, according to data compiled by the Chicago Tribune. The majority of those killings were shootings.

Trump briefly raised the case of “Empire” actor Jussie Smollet, who claimed to have been the victim of an attack on the streets of Chicago from purported Trump supporters. City police later said that Smollet staged the incident. Trump on Monday accused Smollet of beating himself up and called the attack a “scam.”

“It’s a real big scam, just like the impeachment of your president is a scam,” Trump said.

Trump signed an executive order at the conclusion of Monday’s remarks establishing a commission to consider best practices for recruiting, training and supporting law enforcement officers. The commission will also study issues of substance abuse, homelessness and mental illness.

Chicago has had its own issues with community-police relations. Those tensions flared most notably in the case of Laquan McDonald, the teenager who was shot 16 times by police officer Jason Van Dyke in 2014.

Van Dyke was later convicted of murder in the case, and multiple officers have been fired for their alleged roles in covering up the circumstances of McDonald’s death.

Trump, who was joined at Monday’s event by Attorney General William Barr as well as Department of Homeland Security officials and a handful of members of Congress, began his remarks by taking a victory lap following his administration’s successful military raid that resulted in the death of ISIS leader Abu Bakr al-Baghdadi over the weekend.

“It was a tremendous weekend for our country. We killed ISIS leader al-Baghdadi,” Trump said. “He was a sick and depraved man and now he’s dead. He’s dead, he’s dead as a doornail and he didn’t die bravely, I can tell you that.”

Trump added that “another president should have gotten” Baghdadi, suggesting former President Obama not as focused on taking down the elusive figure who was responsible for the expansion of ISIS across Iraq and Syria.

“He should’ve been killed years ago,” Trump said. “Another president should’ve gotten him. But to me I was very important.”