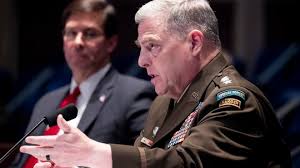 Much of the nation’s top military leadership is now in quarantine after the vice commandant of the Coast Guard tested positive for COVID-19, a senior Defense Department official said Tuesday.

U.S. Cyber Command head Army Gen. Paul Nakasone and National Guard Bureau chief Army Gen. Daniel Hokanson were also in meetings with Ray, as were members of the Joint Staff, and are now in quarantine as well.

However, the official said, the other military leaders have not tested positive and are not experiencing coronavirus symptoms.

In a statement, Coast Guard public affairs director Rear Adm. John Hickey said that Ray attended an event for Gold Star families at the White House on Sunday, Sept. 27. That is one day after the White House held an event in the Rose Garden for the nomination of Amy Coney Barrett to be a Supreme Court justice, after which multiple attendees tested positive for COVID-19.

Hickey said that Ray was then in the Pentagon on Friday, Oct. 2.

Pentagon spokesman Jonathan Hoffman said in a statement that Ray was at the Pentagon last week for meetings with other senior military leaders, including other service chiefs.

“We are conducting additional contact tracing and taking appropriate precautions to protect the force and the mission,” Hoffman said. “Out of an abundance of caution, all potential close contacts from these meetings are self-quarantining and have been tested this morning. No Pentagon contacts have exhibited symptoms and we have no additional positive tests to report at this time.”

Hoffman said there has been no change to the operational readiness or mission capability of the U.S. military.

“Senior military leaders are able to remain fully mission capable and perform their duties from an alternative work location,” Hoffman said. “DoD has been following CDC guidelines since April with respect to temperature testing, social distancing, and the wearing of masks to the greatest extent when social distancing is not possible and will continue to do so.”

“The entire Department of Defense wishes Admiral Ray well on his way to a swift recovery,” Hoffman said.

In a statement, House Armed Services Committee Chairman Rep. Adam Smith, D-Washington, blasted President Trump and his administration for its handling of the coronavirus after news emerged about the military leaders’ quarantine.

“While our military can still operate while leadership is quarantined, the national security implications of the President’s recklessness cannot be overstated,” Smith said. ““The COVID-19 pandemic has ravaged our nation. How can we ever recover if we can’t even count on our commander in chief to follow the most basic guidelines established by his own government? Instead of leading, President Trump continues to willfully jeopardize the safety and security of the American people and our military apparatus.”

Stephen Losey covers leadership and personnel issues as the senior reporter for Air Force Times. He comes from an Air Force family, and his investigative reports have won awards from the Society of Professional Journalists. He has traveled to the Middle East to cover Air Force operations against the Islamic State.