After a blistering and contentious election, then President-elect Biden made a bold promise, “My team will work to see that the majority of our schools can be open by the end of my first 100 days.”

At the end of last month President Biden passed his 100 days in office and as of right now only about 46% of American eligible public school students are receiving a full-time, in person education.  This dismal number disproportionally impacts low income and the minority communities.

Biden so has failed to deliver on his promise, but the media has also failed to hold the Biden administration accountable, instead of allowing the powerful teachers union to dictate the reopening of public schools across the country.

This manifested itself in a May 1st article by the New York Post were given emails obtained through a Freedom of Information request by the conservative watchdog group Americans for Public Trust. Emails showed that the American Federation of Teachers had lobbied the Centers for Disease Control and Prevention on school reopening, and even suggested language that the federal agency should include in its February school reopening guidance.

The teacher union was working in conjunction with the CDC and White House officials on how schools should reopen, and had succeeded in getting some of their recommendations followed.

The emails show that CDC Director Dr. Rochelle Walensky, her top advisors and union officials were working with the Biden administration on how schools should reopen before the much anticipated February 12th announcement.

In the email reads “Thank you again for Friday’s rich discussion about forthcoming CDC guidance and for your openness to the suggestions made by our president, Randi Weingarten, and the AFT,” wrote AFT senior director for health issues Kelly Trautner in a Feb 1 email — which described the union as the CDC’s “thought partner.”

“We were able to review a copy of the draft guidance document over the weekend and were able to provide some initial feedback to several staff this morning about possible ways to strengthen the document,” Trautner continued. “… We believe our experiences on the ground can inform and enrich thinking around what is practicable and prudent in future guidance documents.”

Walensky wasn’t on the Feb 1st email, but the Biden administration’s White House coronavirus testing coordinator Carole Johnson forwarded it to her. Many emails include  Will McIntee, an associate director of public engagement who works in the White House.

“We are immensely grateful for your genuine desire to earn our confidence and your commitment to partnership,” Trautner said in another email to Walensky on Feb 3.

The emails show that a call had been made between Walensky and Weingarten — the former boss of New York City’s United Federation of Teachers which was arranged for Feb 7.

The lobbying efforts by the American Federation of Teachers had indeed paid off as language or “suggestions” were nearly placed verbatim by the union into the final text of the CDC document which was released to the public.

The CDC was in the midst of writing that schools could in fact provide in-person learning regardless of community spread of the virus, Trautner argued that a text should be include in a line reading, “In the event of high community-transmission results from a new variant of SARS-CoV-2, a new update of these guidelines may be necessary.” This insertion appeared on page 22 of the final CDC guidance that was released.

The AFT also demanded that special concessions be made for teachers doing remote work. The added insertion stated that teachers, and staff “who have documented high-risk conditions or who are at increased risk for … COVID-19,” and that similar arrangements should extend to “staff who have a household member” with similar risks.

The final document released by the CDC was widely praised by the AFT in it union press release on Feb 12th, where the union stated, “Today, the CDC met fear of the pandemic with facts and evidence.”

Throughout the country, parents are pleading for schools to reopen, but are meeting intense obstruction and condemnation from teacher unions who consistently state they want better protection from the coronavirus such as vaccinations and safety protections.

Ever since the coronavirus outbreak, we have been told to follow the science, but now science has stated that it’s safe to re-open schools, but the teachers union care not about children but for their own needs, all the while student they are supposed to educate fall further behind.

Democrats and President Biden have always stated to follow science, but when science says it’s safe to open the schools, they fail to follow science instead they continue to do the bidding of the teacher’s union who give them large sums of campaign contributions.

Remember during the presidential campaign candidate, Joe Biden, stated on ABC with George Stephanopoulos in April, “I think it’s important to follow the science. Listen to the experts. Do what they tell you.”

“I’ll choose science over fiction. Hope over fear,” the Democratic nominee declared at a presidential debate in October.

“Science will always be at the forefront of my administration — and these world-renowned scientists will ensure everything we do is grounded in science, facts and the truth,” the then-president-elect said last month in announcing additions to the Office of Science Technology and Policy.

So far President Biden is siding with the teacher’s unions by rejecting science that schools can re-open, as he has been mostly silent and failed to come out more forcibly on the re-opening of American schools. Biden failed in his promise he made in December that after his first 100 days in office all schools will be open.

Should we be surprised, during the presidential campaign, candidate Biden stated before the National Education Association one of the largest teacher’s union that “You will never find in American history a president who is more teacher-centric or more supportive of teachers than me.”

The key element the teacher’s unions have been advocating for is more funding from the individual states, but more importantly the federal government.

So far since the beginning of the pandemic, schools across America have received close to $100 billion in funding from the federal government from the various stimulus spending beginning with the Cares Act which passed in the spring of 2020.

EdSource reported in the last stimulus spending that passed before Christmas, the package included $82 billion for education. Of that, $54 billion will go to pre-K-12 schools — about quadruple the $13.5 billion set aside for schools in the CARES Act funding last spring. The new funding includes about $10 billion for child care, $13 billion for nutrition programs and $23 billion for higher education. 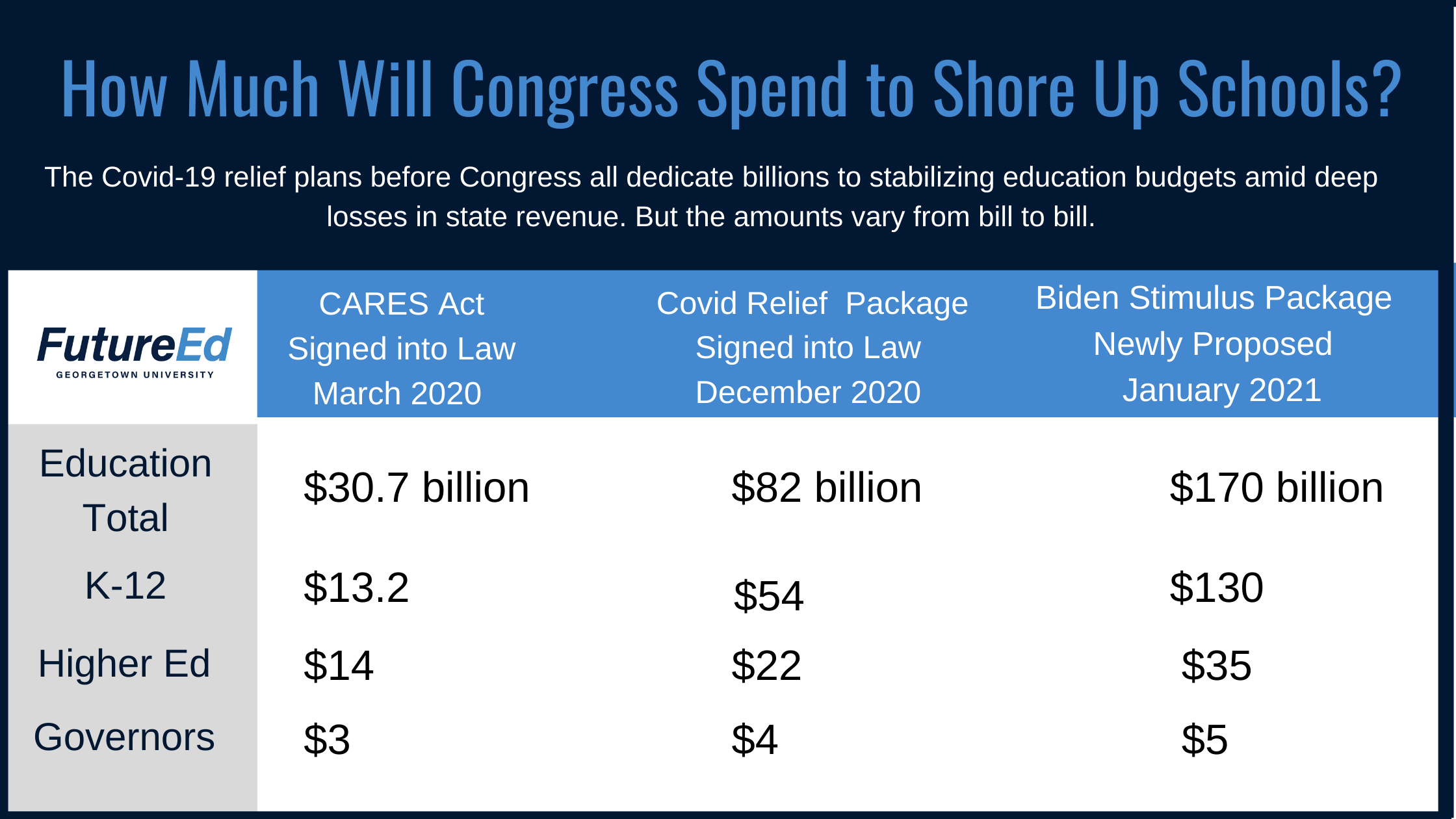 So far close to $300 billion has been allocated to schools in all the various stimulus bills since the coronavirus pandemic first hit America, the question remains where has the money gone and why aren’t the schools fully opened?

Do we want the teacher’s unions making federal policy when they have a dismal track record of student achievement and push a progressive agenda on education of America’s children?

No matter what Biden states openly his administration favors the teacher union instead of children; a sad commentary on our times!

Why hasn’t the media covered this story, if President Trump had allowed the fracking industry to lobby the Environmental Protection Agency and then insert language into federal law everyone’s head would have exploded; why the difference here?