Novel Coronavirus: China to Introduce New Precautions as 160 Million Head Back To Work 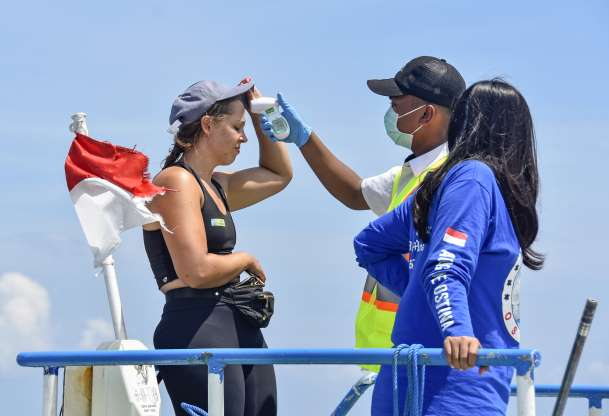 China expects around 160 million employees to return to their workplaces in the next week, as the country seeks to minimize the economic impact of the novel coronavirus.

Next Tuesday marks the official end of the Lunar New Year period, an auspicious occasion on the Chinese calendar, that this year has been marred by the viral illness that has claimed more than 1,110 lives in mainland China.

The huge mobilization of people comes despite prior warnings for citizens to avoid large crowds. In a news briefing Tuesday, Chinese officials said action would be taken to reduce the risk of transmission.

These include limiting the carrying capacity of long-distance coaches, enhancing the sterilization of public transport, and carrying out temperature checks on passengers, said Xu Yahua, Director of Transport Services Department.

Deaths at the center of the outbreak, in Hubei province, appeared to have peaked Wednesday, though concern was growing over the situation on a cruise ship docked in Japan, where a quarantine officer himself became the latest case.

An additional 1,638 confirmed cases were reported in Hubei, central China, as of Wednesday morning. That is a lower increase than the previous day, suggesting that the spread of the virus may be leveling off in the central province.

A large question mark hangs over those figures, however. There remains uncertainty surrounding the efficiency of virus testing methods, as well as the length of the incubation period. Hospitals in Wuhan and elsewhere in Hubei are overwhelmed and struggling to cope, making it possible that some people with the virus may have been unable to see a doctor for diagnosis.

Chinese scientists have estimated that the outbreak could peak in mid-February, though previous estimations have had to be adjusted.

Tedros Adhanom Ghebreyesus, director-general of the World Health Organization, warned Tuesday that the coronavirus is “a very grave threat.” He added later that while the outbreak remains “very much an emergency” for China, there is a “realistic chance” of stopping it.

“We have to invest in preparedness,” Tedros said, adding that richer countries should help invest in countries with a weaker health system. He warned the virus could “create havoc” if it reaches a country whose health system is not capable of handling such an epidemic.

A team of experts from the WHO arrived in China this week, where they are assisting the authorities with containment and treatment measures. The organization also gave the virus its official name Tuesday: Covid-19.

The largest outbreak outside of mainland China remains in Yokohama, a Japanese port south of Tokyo where a cruise ship has been under tight quarantine for a week now.

Japanese Health Minister Katsunobu Kato said an additional 40 virus cases had been confirmed on board the Diamond Princess as of Wednesday, bringing the total number on board to 175.

One of those new cases, Kato said, was a “quarantine officer,” who had come aboard the ship to help with testing passengers. He did not provide any further information on the officer; CNN is seeking further clarification.

In a statement, operator Princess Cruises said “we are following guidance from the Japan Ministry of Health on plans for disembarkation protocols to provide medical care for these new cases.”

Another cruise ship, the MS Westerdam, remains at sea, with more than 2,000 people on board. The vessel has been denied entry by at least four different ports over fears of the virus — though no cases have been confirmed on board so far.

The ship had originally departed Singapore on January 16 and called into ports in Thailand, Cambodia, Vietnam and Hong Kong, according to marine trackers. In Hong Kong, the ship disembarked 1,254 guests and took on an additional 768 before departing, cruise company Holland America said.

Westerdam planned to make stops in the Philippines, Taiwan, Japan, South Korea, and finally China but revised the ship’s final destination from Shanghai to Yokohama following a warning by the US CDC on January 28, according to the company. The Philippines and Taiwan announced closure of their ports to cruise ships due to the fear of coronavirus, and Japanese authorities announced they would deny the ship entry — leaving it in a “holding pattern” in the sea.

The cruise liner later announced plans to dock in Laem Chabang, Thailand to allow its passengers to disembark. However, the country’s government said Tuesday that while Thailand will assist the ship, it will not allow passengers to leave.

“There are a lot of people on board, more than 2,000 people. We have to be careful, not allowing the situation to turn into stage 3 of disease spreading (in Thailand),” Prime Minister Gen. Prayut Chan-o-cha said.

The novel coronavirus has already had an impact on the world’s second biggest economy. The outbreak coincided with China’s most important holiday period, when many families traditionally spent money on food, gifts, and entertainment.

Instead, lockdowns in large cities forced businesses to temporarily close down.

Senior officials in Beijing were speaking to reporters a day after an extended public holiday ended for much of the country, leading some businesses to try to reopen their doors. Others, though, remain closed, and local governments have issued mixed — and in some cases muddled — guidance about what companies should be doing.

Also speaking Tuesday, US Federal Reserve chairman Jerome Powell warned that the outbreak and its knock-on effects could hurt the global economy.

“We are closely monitoring the emergence of the coronavirus, which could lead to disruptions in China that spill over to the rest of the global economy,” Powell said in a report to Congress.

On Monday, Chinese President Xi Jinping called for greater efforts to minimize the impact of the epidemic on the country’s economy, adding that any negative effects would be “short-lived.”

With much of Wuhan remaining locked down, countries have continued to evacuate their citizens from the virus epicenter.

Both South Korea and Canada sent extra flights this week, with Seoul saying it would endeavor to allow Chinese family members of its citizens to board the plane — previously Chinese nationals have not been allowed on evacuation flights.

A Canadian plane carrying 185 passengers arrived in Vancouver early Tuesday. Its final destination is Trenton, Ontario, where the repatriated Canadians and their family members will be quarantined at an armed forces base for 14 days.

In the US, the first planeload of Americans who left Wuhan have completed their two-week quarantine and are being released.

There were no cases of coronavirus identified in the group, which arrived at the base in Riverside County on January 29. The 195 individuals completed their final health check Tuesday morning.

Twenty-four patients will remain on the base Tuesday because they could not make travel arrangements, Jose Arballo Jr., a spokesperson for the Riverside County Department of Public Health, told CNN.

“Some have already left the base, others are departing soon,” Arballo said the the news conference.