Skip to content
Home » Foreign Policy » No-Deal Brexit is now the Most Likely Outcome For the UK, Survey of Finance Execs Says
Previous Next

No-Deal Brexit is now the Most Likely Outcome For the UK, Survey of Finance Execs Says 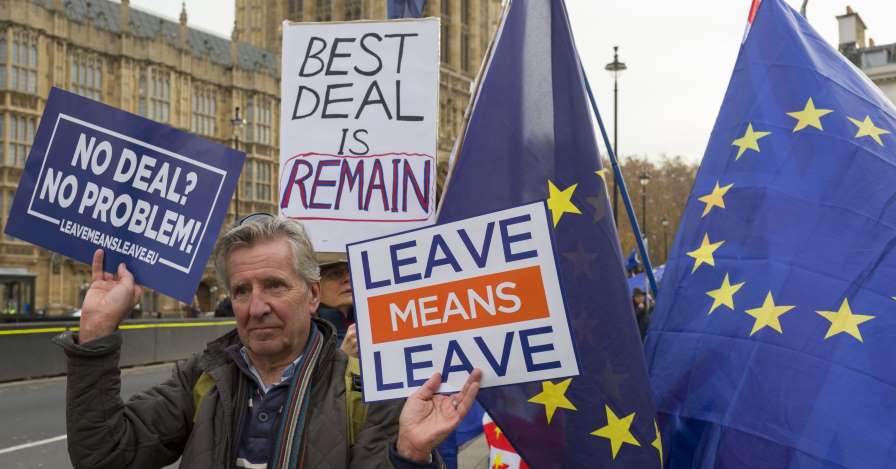 The most likely outcome of Brexit is that the United Kingdom will leave the European Union within weeks with no agreement in place on its future relationship, according to a new CNBC survey of chief financial officers (CFOs).

Britain and Northern Ireland is set to leave the superstate trading bloc on October 31. It is the third deadline for the U.K.’s departure after previous extensions were granted in order to resolve how Britain would withdraw and conduct future trading with EU members.

Fears of no deal have been compounded by a new U.K. government which has reportedly ramped up planning for an abrupt exit while also reducing negotiations with the EU.

According to the latest CNBC Global CFO Council quarterly survey, published Friday, 43.5% of chief financial officers now view no deal as the most likely scenario. Almost a third (32.3%) predict a deadline extension, 8.1% expect a deal can be struck by the end of October, 3.2% foresee a second referendum while the remainder (12.9%) are not sure.

What do you think is most likely to happen regarding Brexit?

The strengthening no deal view marks a sharp rise from the second quarter survey which had almost no respondents predicting no deal with most of the opinion that a further deadline extension would happen.

Of the respondents in the EMEA region, 52.6% forecast no deal with APAC respondents at exactly 50%. American CFOs stood apart with a majority continuing to predict an extension of talks and only 30% betting on no deal at the end of October.

The CNBC Global CFO Council represents some of the largest public and private companies in the world, collectively managing nearly $5 trillion in market value.

To other questions asked, the majority of respondents said the U.S. Federal Reserve is on track to raise interest rates just twice during the whole of 2019. In the previous two quarters, almost no cuts were expected by almost all CFOs quizzed.

On the question of stocks, nearly 50% expect the Dow Jones industrial average will fall below 23,000 points, in comparison to just over 20% who see it rising above 28,000 first. The remainder are unsure.

The council’s global economic outlook remains finely balanced, with only three of 11 countries or regions — the U.K., the euro zone and China — seen as “declining.” All other regions were described as “stable”

(Note: Sixty-two of the 129 current members of the CNBC Global CFO Council responded to this quarter’s survey, including 23 North American-based members, 19 EMEA-based members and 20 APAC-based members. The survey was conducted from Aug. 21–Sep. 3, 2019.)