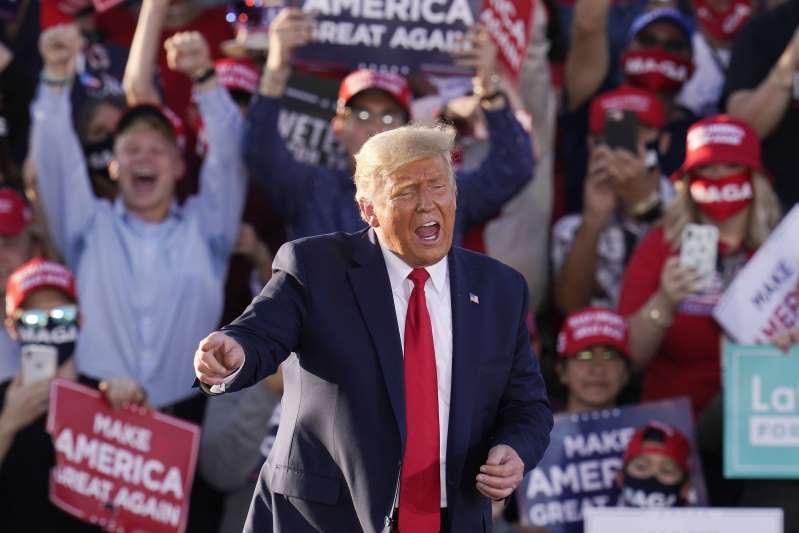 Prospects for an economic relief package in the next two weeks dimmed markedly on Tuesday after Senate Majority Leader Mitch McConnell (R-Ky.) revealed that he has warned the White House not to strike an agreement with House Speaker Nancy Pelosi before the Nov. 3 election.

In remarks at a closed-door Senate GOP lunch, McConnell told his colleagues that Pelosi (D-Calif.) is not negotiating in good faith with Treasury Secretary Steven Mnuchin, and that any deal they reach could disrupt the Senate’s plans to confirm Amy Coney Barrett to the Supreme Court next week. Republicans have voiced concerns that a stimulus deal could splinter the party and exacerbate divisions at a time when they are trying to rally behind the Supreme Court nominee. The comments were confirmed by three people who spoke on the condition of anonymity to discuss them.

McConnell’s attempted intervention came as Pelosi and Mnuchin continued negotiating over the roughly $2 trillion economic relief package. Pelosi spokesman Drew Hammill said the “conversation provided more clarity and common ground as they move closer to an agreement.” But no deal can become law without McConnell’s blessing, and his direct warning to the White House imperils the chances of any bill becoming law in the next two weeks.

McConnell told reporters Tuesday that if a deal were reached and passed by the House with President Trump’s support, he would put it on the Senate floor “at some point” — but he did not commit to doing so before the election.

McConnell has not been part of the Pelosi-Mnuchin talks, which have jumped around in chaotic fashion, and had already made his opposition to an enormous new bill clear. Republicans could lose control of the Senate based on the outcome of November’s election, and senators have made clear to the White House that voting on a huge stimulus deal could mean the end of their majority if it scares away fiscally conservative voters. Mnuchin and Pelosi have continued dancing around a deal for weeks, however, particularly amid signs that the economic recovery is weakening markedly.

The deal under discussion would provide another round of $1,200 stimulus checks, more unemployment benefits, aid for small businesses, money for coronavirus testing, and support for airlines and hospitals, among other things.

In a Bloomberg News interview Tuesday, Pelosi adamantly denied that she was stringing the White House along and said she wouldn’t be negotiating if she didn’t want a deal. But McConnell’s remarks show the raw political calculations that both parties are dealing with two weeks before the election.

The comments emerged amid escalating tensions between some Republican members of Congress and Trump over stimulus negotiations. Trump has in recent days downplayed or dismissed conservative opposition to spending trillions more on a stimulus, saying he wants to spend even more money than Pelosi’s latest $2.2 trillion proposal. Many Republicans had already balked at spending more than $1 trillion on this round of relief. Asked about McConnell’s reluctance to the stimulus, Trump said on Tuesday morning: “He’ll be onboard if something comes. … Not every Republican agrees with me, but they will.”

Nevertheless, Pelosi and Mnuchin continued their negotiations, talking for 45 minutes Tuesday afternoon as they wrangled over sticking points including liability protections for businesses and state and local aid. Pelosi had said that if they are going to vote on a deal by the end of next week, they need to agree on specific language by the end of this week.

Asked after her conversation with Mnuchin whether that could happen, Pelosi replied: “I hope so. That’s the plan. That’s what I would hope. That’s the hope, let me say that.”

Hammill, her spokesman, laid out the next steps.

“On several open questions, the Speaker and the Secretary called for the committee chairs to work to resolve differences about funding levels and language,” he said. “With this guidance, the two principals will continue their discussions [Wednesday] afternoon upon the Secretary’s return.” Mnuchin has been traveling in the Middle East as part of a trip to formalize parts of the Trump administration’s Abraham Accords.

White House Chief of Staff Mark Meadows told CNBC on Tuesday afternoon that Mnuchin and Pelosi have made “good progress” and that negotiations would continue Wednesday. Still, he said major hurdles remain, with the negotiators “several hundred billion” dollars apart and also at odds over the extent of state and local money.

Meadows also said he had several conversations with Trump on Tuesday about stimulus negotiations on and that the president is “very bullish” about not letting a difference in dollar amounts stand in the way of a deal.

“I want to stress: We’re not just down to a difference of language and a few dollars. We still have a ways to go,” Meadows said. “But I would say the conversations today were productive enough to have conversations tomorrow.”

Trump, for his part, has brushed aside complaints from Senate Republicans and said they will ultimately back a package if he tells them to.

“It’s very simple: I want to do it even bigger than the Democrats,” Trump said. “They’ll be on board if something comes.”

McConnell declined to tell reporters whether he’d spoken with Trump about the issue or whether Republicans would support what Trump wanted.

“We’d have to see what it was first,” McConnell told reporters after the Senate GOP lunch.

Many Senate Republicans oppose a massive new spending bill and McConnell is not eager to hold a vote that would divide his conference just before the election, when most Senate Republicans want attention focused on the Barrett nomination.

The scrambling comes amid numerous concerns about the economy. The unemployment rate remains high, the travel industry remains in rough shape, and there are growing concerns about problems in the commercial real estate sector. Many restaurants are still struggling, and some continue to go out of business seven months after the pandemic floored the American economy.

On the Senate floor Tuesday, Republicans and Democrats battled over competing views of what should happen with stimulus legislation, trying to score political points with a series of procedural maneuvers. McConnell called a symbolic vote on a bill to inject $260 billion into the small-business Paycheck Protection Program. A vote to effectively kill the legislation failed 40 to 57, with five Democrats crossing over to vote with Republicans.

Senate Minority Leader Charles E. Schumer (D-N.Y.) bristled at the move, accusing McConnell of holding “show votes on coronavirus relief,” and countered with several procedural moves of his own that Republicans defeated.

On Wednesday, in a rejection of Trump’s desire for a big new bill, McConnell will try to advance an approximately $500 billion bill that will include jobless benefits for the unemployed, funding for schools and the health-care system, and new small-business funding. But that bill will exclude many provisions sought by Democrats and Trump, including a new round of $1,200 stimulus checks.

Senate Democrats have lambasted McConnell for trying to advance what they describe as “emaciated” bills that would provide political cover to Republicans without really solving any problems. The approximately $500 billion bill is nearly identical to a piece of legislation McConnell tried to advance last month, which Democrats opposed.

McConnell’s remarks Tuesday indicate that even if Pelosi and Mnuchin do manage to reach a deal, any vote in the Senate would wait until after the election. If Democrats win a number of seats in November, they could seize control of the Senate beginning in January.

Congress earlier this year approved roughly $3 trillion in aid to try to contain the economic fallout. Some of the funds appeared to help numerous sectors of the economy, but problems remain, particularly because certain programs expired.

A poll released Tuesday by the New York Times and Siena College found overwhelming support for a $2 trillion stimulus package, and many economists have urged policymakers to approve additional fiscal relief.

“The recovery has slowed and without more help it is at risk of backsliding. Neither the virus nor the economic damages it has wrought are gone, and policymakers would be making a serious mistake to act as if they were,” said Adam Ozimek, chief economist at Upwork.

Congress has not passed any relief legislation since April. House Democrats passed two far-reaching bills, but Senate Republicans rejected them. A significant minority of Senate Republicans believe enough money already has been spent and nothing more needs to be done.