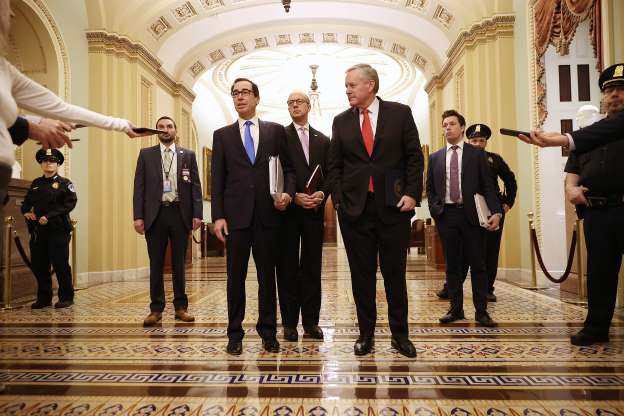 By Jordain Carney, The Hill-

A round of 11th-hour objections is throwing a curveball into the Senate’s consideration of a mammoth stimulus package.

Senate leadership announced the deal on the $2 trillion bill shortly after 1 a.m., and want to pass it on Wednesday as they face intense pressure to take steps to try to reassure an American public and an economy rattled by the coronavirus.

But a brewing fight over a deal on unemployment provisions is threatening to open the door to a push for broader changes to the bill, which was negotiated by Senate Majority Leader Mitch McConnell (R-Ky.), Minority Leader Charles Schumer (D-N.Y.) and Treasury Secretary Steven Mnuchin.

Sen. Bernie Sanders (I-Vt.), who is running for the Democratic presidential nomination, warned that unless a group of GOP senators back down from their demand for changes to the unemployment insurance benefits, he would slow walk the bill until stronger guardrails were put on hundreds of billions in funding for corporations.

“In my view, it would be an outrage to prevent working-class Americans to receive the emergency unemployment assistance included in this legislation,” Sanders said in a statement.

“Unless these Republican senators drop their objection, I am prepared to put a hold on this bill until stronger conditions are imposed on the $500 billion corporate welfare fund to make sure that any corporation receiving financial assistance under this legislation does not lay off workers, cut wages or benefits, ship jobs overseas or pay workers poverty wages,” Sanders continued.

Putting a “hold” on a bill would force McConnell to go through days of procedural loopholes that could delay the bill into the weekend or even early next week.

But the GOP senators say that the agreement, which they are calling a “drafting error,” could prompt individuals who would make less working to leave their jobs, or not actively return to working.

“Unless this bill is fixed, there is a strong incentive for employees to be laid off instead of going to work. … We must sadly oppose the fast-tracking of this bill until this text is addressed, or the Department of Labor issues regulatory guidance that no American would earn more by not working than by working,” Graham, Sasse and Scott, of South Carolina, said in a joint statement.

The back-and-forth comes as senators are scrambling to learn the details of the mammoth package.

Graham said they learned the details of the deal during a 92-minute conference call Senate Republicans had on Wednesday morning. They are asking for a vote on an amendment that would cap unemployment benefits at 100 percent of a person’s salary.

Sen. Chris Murphy (D-Conn.) tweeted: “Let’s not over-complicate this. Several Republican Senators are holding up the bipartisan Coronavirus emergency bill because they think the bill is too good for laid off Americans.”

A Senate GOP aide pushed back against the four senators, underscoring the divisions within the caucus, saying that “nothing in this bill incentivizes businesses to lay off employees, in fact it’s just the opposite.”

“Each state has a different UI program, so the drafters opted for a temporary across-the-board UI boost of $600, which can deliver needed aid in a timely manner rather than burning time to create a different administrative regime for each state. … It’s also important to remember that nobody who voluntarily leaves an available job is eligible for UI,” the aide added.