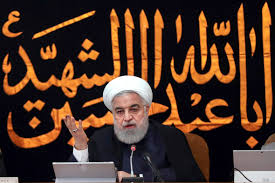 The centrifuges previously spun empty under the terms of the 2015 nuclear agreement that President Donald Trump withdrew from more than a year ago.

Rouhani unveiled the move during live remarks on Iranian state TV. He said Iran would inject uranium gas into 1,044 centrifuges at its Fordow nuclear facility.

While the development is significant because it enables Iran to more quickly enrich uranium to the higher levels needed to produce a nuclear weapon, Tehran has long insisted that its nuclear activities are for peaceful, civilian energy use only. No evidence has emerged to indicate Iran is trying to build a nuclear weapon.

Tehran’s latest step away from the accord comes a day after Iran’s nuclear chief said Iran doubled the number of advanced centrifuges in operation. It also represents Iran’s “fourth step” away from the deal inked by former President Barack Obama, which saw Iran agree to limit its nuclear program in exchange for the lifting of economic sanctions. Exiting the deal was a Trump campaign promise.

Experts differ on how long they believe it would take Iran to produce a nuclear bomb – assuming it wants to – with estimates ranging from months to a year.

There was no immediate reaction from the White House to Rouhani’s comments.

White House on Monday sanctioned members of Iranian Supreme Leader Ayatollah Ali Khamenei’s inner circle as part of its maximalist campaign against Tehran, a move that came as Iran marked the 40th anniversary of the 1979 student takeover of the U.S. Embassy in Tehran and a subsequent 444-day hostage crisis that has set the tone for decades of animosity with the United States.

The collapsing nuclear deal has coincided with mysterious attacks on oil tankers and Saudi oil facilities the U.S. has blamed on Iran. Tehran denies the allegation, though it did seize oil tankers and shoot down a U.S. military surveillance drone.

The U.S. has since increased its military presence across the Middle East, including basing troops in Saudi Arabia for the first time since the aftermath of the Sept. 11, 2001, terror attacks. The Saudis and neighboring United Arab Emirates are believed to be talking to Tehran through back channels to ease tensions.

Rouhani stressed Tuesday that the steps Iran has taken so far, including going beyond the deal’s uranium enrichment and stockpile limitations, could be reversed if European signatories to the accord, who have not withdrawn from the agreement, find a way for Tehran to avoid U.S. sanctions that have choked off its foreign oil sales. “We should be able to sell our oil,” he said.