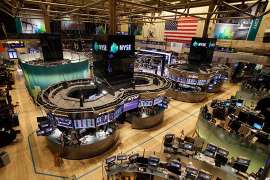 U.S. equity futures stretched higher Tuesday, while the dollar slipped lower and oil prices rallied, as investors bet on the market impact of new stimulus from the European Union and a potential breakthrough on coronavirus rescue spending among lawmakers on Capitol Hill.

EU leaders agreed to an historic €1.85 trillion budget and stimulus package early Tuesday in Brussels, following five days of marathon talks that will see the region’s executive, the European Commission, raising €750 billion in the capital markets and dispersing it among the 27 member states. A €1.1 trillion budget, covering the next six years of the bloc’s spending priorities, was also agreed by the EU leadership during the contentious negotiations in the Belgian capital.

Meanwhile, Congressional Democratic lawmakers are set to meet with aides of President Donald Trump later today to hammer out a potential compromise that could bridge the $2 trillion gap between the House stimulus bill, which was passed in mid-May, and Senate Republican’s preference for a $1 trillion plan that is funded by a payroll tax cut.

Lawmakers need to find that compromise soon, however, given that statutory unemployment benefits, which are protecting the more than 30 million Americans that are still out of work as a result of the global pandemic, are set to run out at the end of next week.

Markets were also buoyed by yesterday’s twin developments in coronavirus vaccine research, and in particular an Oxford University/AstraZeneca plc study, which both suggest a long-term solution to the pandemic, which has taken the lives of more than 600,000 people since its outbreak in early January.

Asia stocks bounced higher, lead by out-sized gains in Australia and Hong Kong, while European stocks rose to the highest levels in nearly five months following the early-morning breakthrough from talks in Brussels.

Wall Street looks set to follow that optimism into a solid opening bell, with contracts tied to the Dow Jones Industrial Average suggesting a 245 point gain — thanks in part to a 5.2% pre-market move for IBM Inc — and those tied to the S&P 500, which edged into positive territory for the year last night, indicating a 24 point advance.

Tech stocks, too, are set for more gains Monday after the Nasdaq Composite closed at another record high last night, driven by big moves in Amazon and Apple, which report quarterly earnings this week and next. Futures contracts tied to the tech-focused benchmark suggest an opening bell gain of around 100 points.

Benchmark 10-year Treasury bond yields, however, continue to sit in the low 0.6% range, and traded at 0.612% overnight, as investors remain cautious amid a still-rising rate of U.S. coronavirus infections and scattered lockdown orders in major economies around the world.

Oil prices, however, rallied on hopes that both government stimulus – along with the $17 trillion being spent by central banks around the world — will ignite commodity demand over the second half of the year.

Heavyweights such as Amazon , Microsoft , AT&T , Intel will report quarterly earnings this week, with a key report also expected from Tesla on Wednesday that could cement the electronic carmaker’s inclusion into the S&P 500.

With around 50 of the S&P 500 reporting so far this earnings seasons — and 85 to come later this week — collective profits are forecast to fall 43.7% from last year, with a near 11% slump in overall revenues, as companies factor-in the worst of the pandemic’s closures earlier this year.