Skip to content
Home » U.S. Politics » Democrats Control the Senate, Will Progressives Push Biden Further to the Left
Previous Next

Democrats Control the Senate, Will Progressives Push Biden Further to the Left 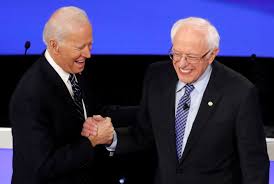 Democrats are elated after winning both Senate elections in Georgia, and with a Democratic majority in the House are eager to enact their progressive agenda for America.

This comes two months after Joe Biden defeated President Donald Trump, but a lingering question remains, which direction will he move toward, the progressive/socialist element of his party or will he govern as a moderate pragmatist president.

This is something we just don’t know, because all through the 2020 presidential campaign Biden has never been pressed nor asked by the media any substantive questions on any policy related issues.  We do know that he chose Kamala Harris as his vice president who is an ideological member of the socialist wing of the Democratic Party, and the most liberal member of the U.S. Senate.

Democratic Senate minority Leader Chuck Schumer who now becomes the majority leader after gaining control after the Georgia election stated in November, “Now we take Georgia, then we change America,” but what does this mean?

Now that Biden is the President-elect and will be inaugurated on January 20th, he will not enjoy anything resembling the substantial Democratic majority in both the House and Senate which greeted Barack Obama when he won the presidency in 2009.

When Biden assumes the presidency, he will have Democratic control of both the House and the Senate, but unlike Obama, Democrats only have a slim 11 seat advantage in Congress and a 50-50 split in the Senate with Vice President-elect Kamala Harris as the tie breaker.

With control of the House, the Senate and the executive branches of government progressives will try and advance their agenda that includes the Greed New Deal, a healthcare overhaul that includes Medicare for all, higher taxes on the wealthy, end the Senate filibuster, court packing of the Supreme Court and a host of other socialist policies long desired.

The major question for Biden is which way will he govern? Will he embrace the socialist agenda or will he govern as a moderate pragmatist? Will he refute the anger the progressives have for Trump supporters and the Republican Party?

Far too often the media have only focused on the rhetoric by Trump and have failed to even give equal coverage to the dangerous rhetoric emanating from progressive Democratic politicians. Constitutional Law Professor Jonathan Turley at George Washington University has repeatedly highlighted the glaring double standard in his blog.

Will Biden push back against the extremist elements in his own party?

The challenge for Biden is he decides to embrace the progressive agenda; he would have a difficult time getting his proposals through a Democratic Congress and Senate with only a few votes to spare in the House no margin for error in the Senate.

After the November election Democrats were salivating over a blue wave that would add to their House majority, but this never happened as many moderates lost their congressional races to Republicans.  Moderate Democrats were extremely angry at progressive Democrats for pushing the party in taking extreme positions that cost many their seats. Right after the election came to a boiling point during a House Democratic conference call when moderates openly rebuked progressive Democrats.

Even moderate Democratic West Virginia Senator Joe Manchin, also mentioned how the positions pushed by the progressive wing of the party hurt his colleagues in the House and said Democrats allowed their Republican opponents to cast them as “socialists” even though “that’s not who we are and it’s not what we’re about.”

Far too often president’s often misread why they won the presidency, Bill Clinton claimed a liberal mandate and faced the wrath of voters in the 1994 mid-term elections when the Republicans gained control of the House for the first time since 1954, and the Senate since 1986.

Obama came into office with the largest Democratic majority since the 1970’s and then proceeded to govern as a progressive only to lose the House in 2010 and the Senate in 2014.

Biden is coming into the presidency without a clear mandate, as the 2020 presidential campaign was mere a referendum on Donald Trump, instead of voters embracing Biden. Throughout the campaign Biden has never been asked nor was he even challenged on any of his policy proposals or pressed to explain them in detail.

Upon assuming the presidency Biden will have to deal with the coronavirus. Both Biden and Harris have routinely criticized Trump’s response but gave no details on what they would different.

Last summer Biden was interviewed on MSNBC by Joy Reid when she asked if you were president what you would do differently then what President Trump has done.

Biden gave six examples of how his approach would be different from Trump, unfortunately, Reid never pressed nor has any other media outlet reported that everything Biden suggested, the president is either doing or has done.

At this point we don’t know what he would do differently, except the possibility of a nationwide mask mandate.

Beyond the coronavirus, the U.S. economy is the top concern for Americans, especially after December’s job report showing a loss of 140,000 jobs mainly stemming from forced economic lockdown’ imposed by governors across the country.

In his efforts to revitalize the U.S. economy Biden plans to raise $4 trillion in new taxes and repeatedly stated no American who makes under $400,000 will see their taxes increase.

Throughout the presidential campaign Biden wasn’t pressed when he mentioned the repeal of the Trump tax cuts, his increase of the corporate, individual, and investment taxes, but not once explaining how this would not impact middle class Americans.

The Tax Foundation states otherwise and that Biden’s tax proposals don’t raise enough revenue to go along with his trillions in new spending proposals, and they would indeed impact middle class America

One of the most controversial elements of Biden’s new polices is his version of “The New Green Deal,” which he has outlined in a $2 trillion climate strategy and at the same time consistently stating he would not ban fracking.

This is also reiterated in the Democratic Party Platform of 2020, to reach net-zero emissions as rapidly as possible, Democrats commit to eliminating carbon pollution from power plants by 2035 through technology-neutral standards for clean energy and energy efficiency.

In August, Senate Democrats Special Committee on the Climate Crisis issued a report in which they would pursue in a Biden administration is by having U.S. financial institutions factor in climate change into any capital funding approvals. This would virtually eliminate any oil and gas companies being able to obtain financial investments, this new change would end America’s energy independence.

If a Biden administration couldn’t get legislation passed, he could duplicate what the Obama administration pursued with an updated version of Operation Choke Point that would force banks to decline financing of the oil and gas industry?

Biden has stated that he is in favor of an additional $2,000 of stimulus that failed to be reached in the previous Congress, but he should be able to gain Republican votes as this has bi-partisan approval.  After this, Biden has been silent on what additional measure he would enact nor has the media pressed him on what other polices is in the offering.

One of the biggest contentious issues that Democratic House Speaker Nancy Pelosi and the Trump administration where at an impasse over, related to a fiscal bailout of states and legal protection for businesses regarding the coronavirus.

Biden has never stated nor pressed by the media where he stood on these key demands by Democrats.

Once he assumes the presidency Biden will have to address;

These are just a sampling of what he will have to confront upon assuming the presidency, but since he wasn’t pressed on any of these topics while campaigning, he will now be the one having to make the executive decision, something he has never done in his long career in Washington.

The hard part for Biden will not come from Republicans but how will he deal with activist and energized progressive Democrats who want payback for helping him get elected.