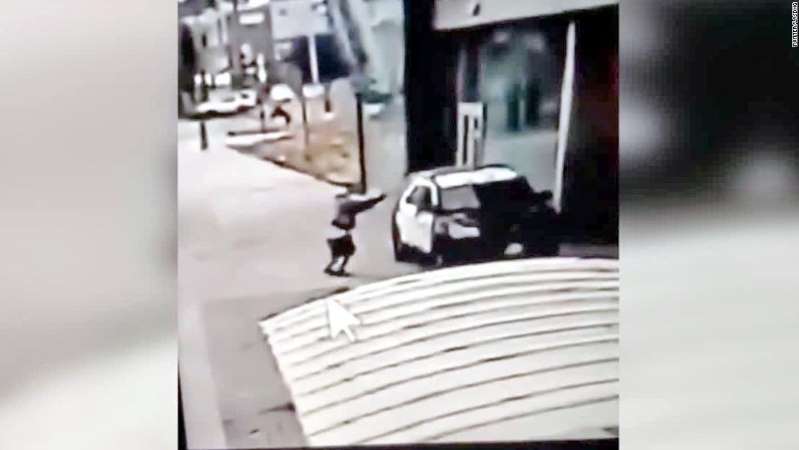 One of two Los Angeles County Sheriff’s deputies attacked Saturday saved the life of the other by applying a tourniquet — all while bleeding from the gunshot wound to her face.

“There’s no other way to put it, they’re amazing,” Los Angeles Mayor Eric Garcetti told CNN’s Anderson Cooper in an interview on Monday as he described the bravery of the deputies.

Both deputies were shot four or five times by a gunman in Compton, California, Saturday night, Garcetti said. Both are in stable but critical condition after they “got through surgery well,” Sheriff Alex Villanueva told KABC radio. Garcetti said by an “absolute miracle” it looks like they will both survive.

Footage of the incident that appears to have been recorded from surveillance cameras shows a female deputy, who Garcetti identified as a 31-year-old mother, taking cover behind a pillar and rendering aid to her 24-year-old male partner and calling for help. Both were bloodied.

“These are two brave individuals who put their lives on the line,” Garcetti said.

Detectives have not yet identified a suspect in the shooting, and — thanks to donations from two private donors — a reward has been increased to $175,000, Villanueva said.

How the attack unfolded

The gunman walked toward the passenger’s side of the deputies’ vehicle, raised a pistol and shot both deputies, Capt. Kent Wegener said.

The sheriff’s department tweeted surveillance video of the shooting and the gunman running away.

“This is just a somber reminder that this is a dangerous job, and actions and words have consequences. Our job does not get any easier because people do not like law enforcement,” Villanueva said. “It pisses me off. It dismays me at the same time.”

Garcetti said “there is no place in our society for the violence that we saw.” He described Los Angeles County Sheriff’s deputies as guardians of one of the city’s public transit lines.

Both deputies were sworn in 14 months ago, the sheriff said.

“Acts of lawlessness and violence directed against police officers are unacceptable, outrageous, and entirely counterproductive to the pursuit of greater peace and justice in America — as are the actions of those who cheer such attacks on,” Biden said in a statement.

“Every day, law enforcement officers put themselves at risk to protect our community,” Schiff tweeted. “I hope the perpetrator of this cowardly attack can be quickly brought to justice.”