Appeals Court Rules ACA’s Individual Mandate Unconstitutional; Lower Court to Decide Whether Rest of Law Can sTand Without it 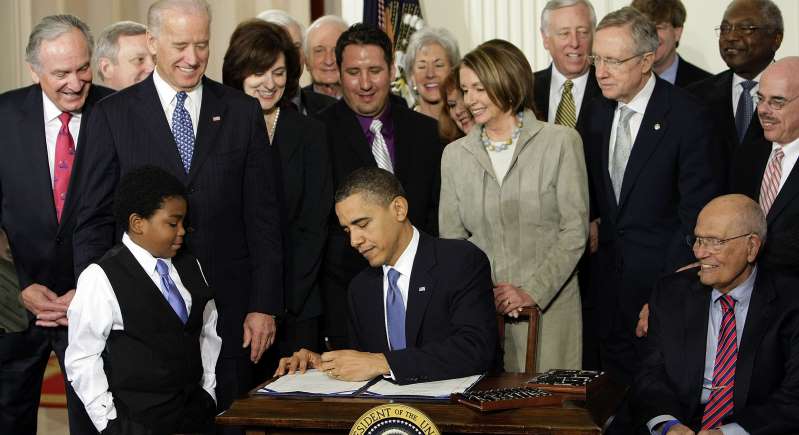 A federal appeals court on Wednesday struck down part of the Affordable Care Act, ruling that its requirement that most Americans carry insurance is unconstitutional while sending back to a lower court the question of whether the rest of the law can remain without it.

The long-awaited decision by a three-judge panel of the U.S. Court of Appeals for the 5th Circuit has little immediate practical effect on consumers because Congress already has removed the penalty for the insurance requirement. But the panel’s two-to-one ruling leaves the rest of the sprawling statute in limbo and catapults questions about insurance coverage and consumer protections for people with preexisting medical conditions to the forefront of the 2020 presidential and congressional campaigns.

The panel’s one Democratic appointee dissented from the 98-page opinion, writing that the Republican states challenging the law did not have standing to do so. If they did, she wrote, she would find the mandate constitutional.

The 5th Circuit decision almost certainly will bring the health-care law before the Supreme Court for a third time, and California Attorney General Xavier Becerra, leading a coalition of his Democratic counterparts fighting to preserve the law, said Wednesday night that he was prepared to ask the high court to take the case before the lower court rules again. But by sending a thorny legal question back to the Texas jurist who already has held the law unconstitutional, the judges may effectively slow the progress of the case, so that the high court does not take it during its current term and decide it before the November elections.

The opinion, eagerly awaited for months by politicians, the health care industry and the legal community, triggered a swift outpouring of condemnation from Democrats.

Calling the opinion “cowardly,” Senate Minority Leader Charles E. Schumer (D-N.Y.) said in a statement, “Tonight’s ruling is a sharp reminder to Americans that a heartless lawsuit supported by Congressional Republicans and President Trump is why vital health care protections, especially protections for people with pre-existing conditions, are in grave danger.”

President Trump said the decision “is a win for all Americans and confirms what I have said all along: that the individual mandate, by far the worst element of Obamacare, is unconstitutional.” The president said the ruling “will not alter the current health-care system,” although he did not reiterate the administration’s past reassurances that would continue to enforce the statute until all appeals in the case are exhausted.

Other Republicans also cheered the ruling. “I applaud the Fifth Circuit’s decision,” said Texas Attorney General Ken Paxton (R) who filed the lawsuit. “As the court’s opinion recognized, the only reason the Supreme Court upheld Obamacare in 2012 was Congress’ taxing power, and without the individual mandate’s penalty that justification crumbled,” Paxton said in a statement.

Wednesday’s ruling resembles the legal position the Trump administration staked out in the case a year ago before the Justice Department, under Attorney General William Barr, hardened its stance to argue in March that the whole law is unconstitutional.

The ruling comes in a case initially regarded as marginal by ACA supporters and critics alike. But since December, 2018, when a federal trial court judge held the whole law unconstitutional, it has posed a more serious challenge to the 2010 statute passed by a Democratic Congress and considered a major accomplishment of President Obama’s first term.

The lawsuit was filed in February, 2018 by Paxton and his counterparts from other Republican-led states — currently 18 in all. Their main argument is that the ACA became unconstitutional when Congress adopted a broad tax bill in late 2017 that, starting this year, eliminated the law’s penalty for people who flout the requirement that most Americans carry health insurance. The plaintiffs said that when the Supreme Court upheld the ACA in 2012, the majority reasoned it was legal under Congress’s taxing powers.

The two Republican-appointed judges on the 5th Circuit panel sided with that reasoning.

Now that Americans are free to ignore the insurance requirement with no risk of penalty, the majority wrote, the “attributes that saved the statute because it could be read as a tax no longer exist.” Those jurists are Judges Kurt Engelhardt appointed by President Trump last year and Jennifer Walker Elrod, an appointee of President George W. Bush.

The opinion, written by Elrod, also sends parts of the case back to U.S. District Judge Reed O’Connor, a conservative judge on the U.S. District Court for the Northern District of Texas who held almost exactly a year ago that the entire ACA is unconstitutional. The appellate judges direct O’Connor to reconsider the question, known in legal parlance as severability, of whether the mandate can be legally distinct from the rest of the law.

The opinion instructs O’Connor to answer two questions: Which parts of the ACA “are indeed inseverable” now that the mandate is no longer enforced, and whether a ruling in the case should apply onto to the Republican-led states that sued to overturn the law, an issued raised by Trump administration lawyers.

The Republican attorneys general had argued in their lawsuit that sections of the law cannot be separated so that if the part of the law that includes the insurance requirement is no longer valid, the entire law must be considered unconstitutional.

In June of 2018, the Trump administration decided not to defend the law in court. It was an unorthodox step, since the federal government is the defendant in the case, and the executive branch typically defends existing statutes in court.

At first, the Justice Department did not go as far as the GOP attorneys general, contending the insurance requirement and consumer insurance protections should be struck down, while saying the rest of the law could be preserved. However, the administration changed positions early this spring, agreeing with Paxton and the others that the whole law is unconstitutional.

The law has been defended mainly by a coalition of Democratic attorneys general, led by Becerra, who contend that in changing tax law, Congress’s GOP majority lowered the ACA’s tax penalty to zero but did not eliminate it. Even if that aspect of the law were invalidated, Congress gave no hint in the tax law that it intended to disrupt the rest of the ACA, they contend.

The panel’s lone Democratic appointee, Judge Carolyn Dineen King, a former chief judge of the court who was appointed by President Jimmy Carter, disagreed with her fellow panel members about both the standing of the GOP attorneys general to bring the case and the mandate’s constitutionality.

In her dissent, King wrote that, with Congress having lowered to zero dollars the penalty for people who fail to carry health insurance, “questions about the legality of the individual ‘mandate’ are purely academic, and people can purchase insurance—or not—as they please.”

As for sending back to the lower court the question of whether the rest of the law remains intact, King wrote: “Answering that question should be easy, since Congress removed the coverage requirement’s only enforcement mechanism but left the rest of the Affordable Care Act in place.” And sending it back to the Texas court “will unnecessarily prolong this litigation and the concomitant uncertainty over the future of the healthcare sector.”

If the appellate decision is upheld, the most popular element that would come unglued is insurance protections for Americans with preexisting medical conditions. Congressional Democrats immediately seized on that uncertainty.

Other elements of the law that are at potential risk include insurance subsidies for most people buying health plans through ACA marketplaces, designed for individuals and families that cannot get affordable health benefits through a job; the expansion of Medicaid in three dozen states, the ability of young adults to stay on their parents’ insurance policies until they turn 26; and no-charge preventive care for older Americans on Medicare.

The law also is woven more subtly into many other aspects of the health-care system, from payment formulas for hospitals and doctors, to experiments intended to nudge health-care from a system that pays for the quantity of medical services to one based on the value of care patients receive.

One health agency created under the law is providing the underpinning for some of the Trump administration’s proposals to lower drug prices.