Skip to content
Home » U.S. Politics » Winners and losers from Night 2 of the second Democratic debate
Previous Next

Winners and losers from Night 2 of the second Democratic debate 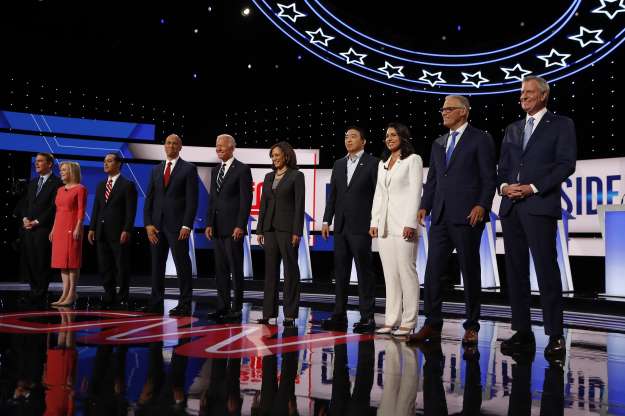 Wednesday night concluded the second Democratic primary debate of the 2020 election, with Sens. Cory Booker (N.J.) and Kamala D. Harris (Calif.) and former vice president Joe Biden as the headlining candidates. None of them turned in a resounding performance.

Trump the debater: At one point, New York Mayor Bill de Blasio called out Biden for failing to directly respond to his challenge on the millions of deportations under President Barack Obama. “I guarantee you, if you’re debating Donald Trump, he’s not going to let you off the hook.” The prospect of going toe-to-toe with Trump has loomed over these early debates, and on Wednesday night especially, the leading candidates didn’t exactly demonstrate their debating prowess.

Biden and Booker were both thrown off by protesters early in the debate. Biden kept mixing up the cost of Medicare-for-all (was it $3 trillion over 10 years, or $30 trillion?). Biden, Harris and Sen. Michael F. Bennet (D-Colo.) kept stumbling over their words, with Biden at one point referring to Booker as “the future president.” Sen. Kirsten Gillibrand (D-N.Y.) at one point had nothing ready to go when she was brought in on a discussion, emitting a painful “um” that drew laughter. And even in Harris’s opening statement, while hailing her ability to prosecute the case against Trump, the senator messed up her talking point, saying she would “prosecute the case of four more years of Donald Trump . . . and against him.”

Bernie Sanders and Elizabeth Warren: No, they didn’t debate Wednesday, but they were solid on Tuesday night — and their performances were even better in contrast. They handled the heat better, especially when defending Medicare-for-all.

The also-rans: I’ve been as critical as anybody when it comes to how the Democratic Party has structured these debates. Splitting up the leading candidates so they can’t debate one another is . . . not ideal. But the last two nights showed the upside. The lesser-known candidates engaged the leaders on substantive differences, often taking positions that the leaders won’t on issues such as health care, immigration and criminal justice. And in some ways, Democrats should be thankful the top hopefuls are being tested so much. It may not always be pretty, but it helps a party at a crossroads decide what it’s about.

Julián Castro: Castro might have been the standout. He ranked second after the first debate when it came to who pleasantly surprised people the most, but he didn’t get really any polling bump out of it. He was strong again on Wednesday night — when he got the chance. At one point, he got in one of the most crowd-pleasing digs at Biden: “Mr. Vice President, it looks like one of us has learned the lessons of the past, and one of us hasn’t,” he said while talking about immigration. “. . . What we need are politicians who actually have some guts on this issue.”

Andrew Yang: A night after the least heralded and most unorthodox candidate on the stage, Marianne Williamson, made a good second impression, Yang had his own moments. His line about his immigrant father securing more than 65 patents was strong. His opening statement line about how he was the most opposite of Trump — as “an Asian man who likes math” — was well-received. And his closing statement, keying on how he doesn’t wear a tie, was also spot-on. It’ll be interesting to see whether he and Williamson actually gain support or continue to be niche candidates with exceptionally devoted (but small) bases.

Kamala Harris: She was the big winner in the first debate, and on Wednesday night she was in for a much tougher time. Her tough-on-crime history as a prosecutor and her equivocation on certain issues, including busing and Medicare-for-all, made her a convenient target. She didn’t exactly handle it well. Challenged repeatedly by some of the lower-polling candidates on the stage, she was at times halting and didn’t seem fully ready for the challenge at hand.

She rose in the polls briefly after the first debate, but only momentarily. Wednesday’s performance doesn’t seem likely to rebuild her former momentum. Her strongest moment came when she was challenged on defending the death penalty as California attorney general, when she deftly segued into her decision not to pursue the death penalty as a prosecutor. Being that prepared and passionate will be key moving forward.

Joe Biden: It wasn’t as bad as the first debate, but it wasn’t good, either. Even more so than last time, Biden was getting it from all sides, with candidates often deflecting attacks on themselves into attacks on him. He fumbled his own campaign text message number in his closing statement. Maybe his worst moment came when de Blasio challenged him on the deportations under Obama. He asked repeatedly whether Biden counseled against those deportations. Eventually, Biden responded, “I was vice president. I am not the president. I keep my recommendation to him in private.” Not exactly an endorsement of the president whose legacy Biden has bear-hugged. Booker responded: “Mr. Vice President, you can’t have it both ways.”

The “Republican talking point” talking point: This one was popular in Tuesday night’s portion of the debate, and it reared its head again on Wednesday. “We cannot keep with the Republican talking points on this,” Harris said amid attacks on her Medicare-for-all proposal, echoing Sanders and Warren from the night before. Castro at one point hit back at those criticizing the proposed decriminalization of illegal border crossings. “Open borders is a right-wing talking point,” Castro said, “and frankly I’m disappointed that some folks — including some folks on this stage — have taken the bait.”

Debates are about disagreement. Just because Democrats don’t believe in more aggressive policies doesn’t mean they are doing the GOP’s bidding. In fact, they are often espousing positions that used to be their own party’s default not that long ago. Maybe they simply disagree. Both Biden and Bennet hit back against the “Republican talking point” talking point, with Bennet saying “this has nothing to do with Republican talking points” when criticizing Sanders’s Medicare-for-all plan. Bennet is not exactly some conservative Democrat.

CNN’s censors: At one point, Booker noted Trump’s private reference to “shithole countries,” using that word himself on live TV. It was not bleeped. At least it was in prime time, right?

Daniel Pantaleo: We recently found out that the New York Police Department officer who was involved in the fatal arrest of Eric Garner would escape federal charges. In his opening statement, de Blasio was met with chants of “Fire Pantaleo.” After the protesters chanted again during Booker’s opening statement, his staff tweeted “good for you” to the protesters from his account. Later, Gillibrand, the senator from New York, agreed that Pantaleo should be fired — “now” — and Castro said he should be “off the street.”