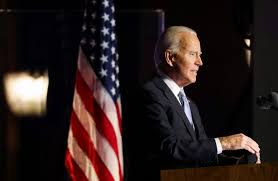 With President-elect Joe Biden assembling his cabinet, will the media finally begin to ask tough and substance questions on the challenges facing America.

Throughout the 2020 presidential race, the media has allowed Biden to conduct his campaign virtually from his basement of his home, even on the rare time he did venture out the media failed to ask any substantive questions.

Now that the election is over President-elect Biden again is being pampered by the media, allowing only preselected reporters to be called on and what questions can be asked. This is a far cry how the media treated President Trump!

This doesn’t look to change any time soon! The weekend before Thanksgiving CBS News reporter Bo Erickson seem to get under the skin of Biden when he asked one of the few substantive questions to the President-elect.

The question centered on the ongoing debate regarding opening of schools during the Covid-19 pandemic, “Mr. Biden, the COVID task force said it’s safe for students to be in class,” Erickson asked. “Are you going to be encouraging unions to cooperate more to bring kids back to the classrooms, sir?”

Biden angrily responded, but instead of responding to a legitimate question and one that wasn’t shouted at him, “Why are you the only guy that always shouts out questions?”

At that moment Biden’s staff escorted him from the event. Erickson continued to issue a follow up question on his Twitter account, (@BoKnowsNews), “Asked Biden if he will encourage teacher unions to cooperate to get kids back in school because the COVID task force said it is safe to be in the classroom. He didn’t answer.”

This is a substantive question that should be asked. It seems the media has two set of standards one for Democrats who get soft ball questions, while Republicans and especially Trump have antagonistic questioning.

Why hasn’t the media harshly questioned Democratic Governor of California Gavin Newsom who is allowed to send his children to in-person learning at a private school, but children who attend public school can’t, they must learn at home.  Both Biden and Newsom are against school choice except for their children, everyone else must suffer through learning at home.

Even Constitutional law Professor at George Washington University Jonathan Turley wanted to know why “Erickson is the only guy (other than Fox News’ Peter Doocy) who is asking such questions. Most of the media were openly in the bag for Biden during the campaign. The hope however was that, once he was elected, the media would rediscover a modicum of independence and integrity in their approach to Biden. That will not happen so long as Biden can accurately ask why the Erickson is “the only guy” asking questions.”

Is this what we can expect from the media during a Biden presidency; only ask softball questions from preselected reporters?

Now that Biden is the President-elect, it’s time to know how a Biden administration would govern regarding key policy areas. The presidential campaign should have been a time for the country to have a sense on his policy proposals and to have them debated.  Instead the media provided cover and protected for Biden and is essentially now synonymous with the Democratic Party.

There are legitimate questions the American people need to know how Biden intends to govern and two of the most serious issues he will be dealing with is the coronavirus and the U.S. economy.

Unfortunately, for Biden, each example given Trump had already done it or is in the process of doing it. Since this interview, Reid nor any of the media have ever challenged his responses or asked any additional follow up questions. Even after the election Biden has been ambivalent on what he would do differently, beyond requiring everyone to where masks.

The economy is the other top concern of voters and throughout the presidential campaign Biden has consistently stated that they would not raise taxes on anyone making less than $400,000 and would repeal the Trump tax cuts.

The question the media should have asked Biden, how would raising individual, corporate, investment taxes on capital gains, and other investments not impact the middle class? A detailed historical analysis of how Biden’s tax policy would essentially be repeating history.   https://www.ubaldireports.com/are-biden-and-the-democrats-repeating-history-with-their-tax-proposals/

The media should have pressed Biden, on how would increasing the corporate tax rate not be passed on to workers through lower wages and higher prices for the things they by, as reported by the Tax Foundation and the Tax Policy Center?

Throughout the presidential race, Biden has touted the success of the Affordable Care Act.  If elected president Biden plans on improving Obamacare by adding a public healthcare option costing over $800 billion. He would do this by lowering the enrollment age for Medicare, so as to increase coverage and lower costs?

The question which has never been asked of Biden’s public option is how will this be funded and who would be writing the rules? If Washington writes the rules how will the public option not have an undue advantage over traditional private insurance?  Is the $800 billion of taxpayer money a onetime payment or can the public option seek additional funding if it doesn’t meet its objective as almost all government programs fail to meet their initial goals?

Once the public option is in place would enrollees and health-care providers put pressure on lawmakers to ensure premiums are kept low? Would Washington or the taxpayers need to keep continuing to provide an infusion of taxpayer dollars to main low costs? This means taxpayers would be on the hook, as Medicare has a history of broken promises on curtailing spending.

How would lowering the age for Medicare not increase the insolvency of the system when it already is facing financial difficulties? Would a Biden health care plan include coverage for illegal immigrants when last year during a Democratic presidential primary debate Biden raised his hand with all other Democratic hopefuls stating they would?

Even questions on the economy the media has handled Biden with kid glove treatment, especially as it relates to energy. Biden has repeatedly mentioned he would not ban fracking, but would he place undue regulatory burden on the energy sector as was done during the Obama-Biden administration?

The media has failed to even do basic research as his responses were inconsistent considering the Biden-Sanders Unity task force document and the Democratic National Committee Party Platform states the banning of all fossil fuels by 2035.  If you are not banning fracking, then how do you get to zero fossil fuels by 2035?

Biden was not asked if you are not banning fossil fuels then why have Democrats pressured the major U.S. banks to refuse to loan needed capital for oil and Gas projects. When energy companies are able to get loans, they have to pay a much higher interest rate. Would a Biden administration continue this practice or accelerate it?

Democrats have championed the “Black Lives Matter” movement, with every expert stating the only way out of poverty is with a solid education.  Biden has stated that if elected president he would be the teacher’s union president. On Biden’s presidential website and on the campaign trail, the former vice president has championed increased funding for public education and dramatically opposed to any federal funding for charter schools and against any aspect of school choice.

Currently billions have been spent on public education at the federal and state levels but still 70% of black and Hispanic children are deficient at grade level in math and English, how would this change?  This dismal and deplorable situation is replicated across the states and cities in America. Why has the media never asked Biden about this dismal statistic?

Why hasn’t the media asked Biden why he was able to have school choice for his two sons to attend a prestigious private Catholic High School but then at the same time deny choice for everyone else? Especially black and Hispanic children who they claim to want to help.

These are only a small sampling of the questions that need to be asked of President-elect Joe Biden but sadly they won’t! Are we going to have to wait until a crisis happens before we get any answers, at that point it might be too late!