US war against Iran is impossible, claims Iranian general

The deployment of a US aircraft carrier to Iran’s regional waters is nothing but psychological warfare and part of a plan to intimidate Tehran, the head of the Revolutionary Guards Corps, Gen Hossein Salami, has told parliamentarians in a closed-door session.

The IRGC commander said a US war against Iran was impossible, claiming Washington lacked the necessary military strength.

Another senior commander claimed Iran had the firepower to “hit the US in the head” during the session in Tehran on Sunday.

The combined remarks represent another ratcheting up of the bellicose rhetoric between Washington and Tehran, since Iran began a partial withdrawal last week from 2015 the nuclear deal.

The withdrawal is designed to put pressure on Europe to help ease US economic sanctions, as well as reassure Iranians that the government will resist Donald Trump.

Salami was appointed head of the IRGC last month and is seen as critical to how prepared Iran might be to test US military resolve.

The aircraft carrier USS Abraham Lincoln, carrying up to 40 strike aircraft, has been deployed to the Gulf.

The head of the IRGC aerospace division, Amirali Hajizadeh, said: “An aircraft carrier that has at least 40 to 50 planes on it and 6,000 forces gathered within it was a serious threat for us in the past, but now … the threats have switched to opportunities.

“If [the Americans] make a move, we will hit them in the head.”

Iran’s foreign minister, Mohammad Javad Zarif, said in a tweet on Sunday that the US national security adviser, John Bolton, had laid plans for the US to withdraw from the nuclear deal and take a more aggressive posture toward the Islamic Republic even before he took up his current post.

Zarif tweeted a link to a 2017 National Review article written by Bolton entitled How to Get Out of the Iran Nuclear Deal.

“A detailed blueprint for #FakeIntelligence, #ForeverWar and even empty offers for talks – only phone numbers were not included,” Zarif wrote on Twitter. 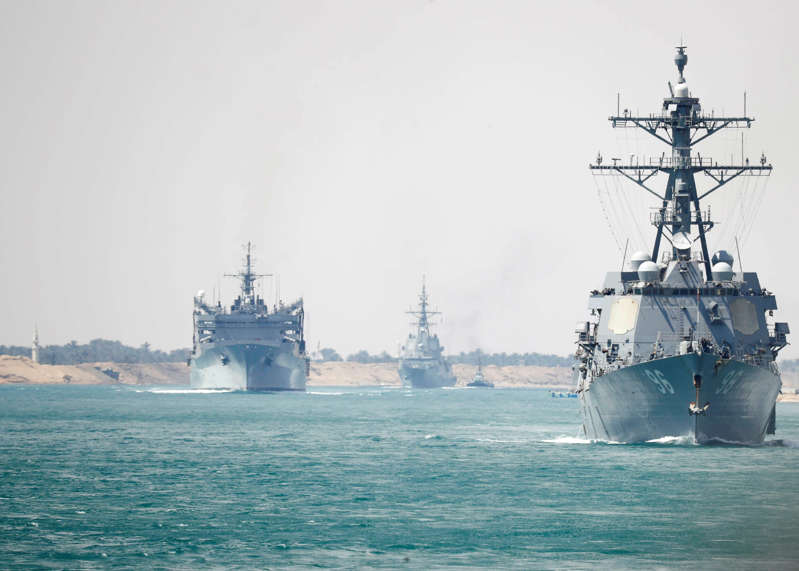 © ASSOCIATED PRESS In this Thursday, May 9, 2019 photo released by the U.S. Navy, the Abraham Lincoln Carrier Strike Group transits the Suez Canal in Egypt. The aircraft carrier and its strike group are deploying to the Persian Gulf on orders from the White House to respond to an unspecified threat from Iran. (Mass Communication Specialist 3rd Class Darion Chanelle Triplett/U.S. Navy via AP)CNN reported on Friday that the White House had passed a telephone number to Switzerland for contacting Trump in case Iranian officials want to hold talks.

Iran has given the EU 60 days to come up with fresh measures to dilute the impact of US sanctions, or else it will take fresh steps to leave the agreement, including increasing levels of uranium enrichment.

Although EU leaders blame the US for forcing Tehran to retaliate, it is urging Iran not to take the steps now threatened since they might be seen as legally breaching the deal’s terms.

The US withdrew from the deal a year ago, but the EU, Russia and China have remained committed, saying there is no evidence Tehran has breached its terms.

Ellie Geranmayeh, an Iran expert at the European Council on Foreign Relations, said Iran still hoped Europe and China might “pull something out of the hat” to save the deal by easing sanctions. She added that Tehran had wild expectations of what the EU might be able to do to protect Iran from the effects of US sanctions.