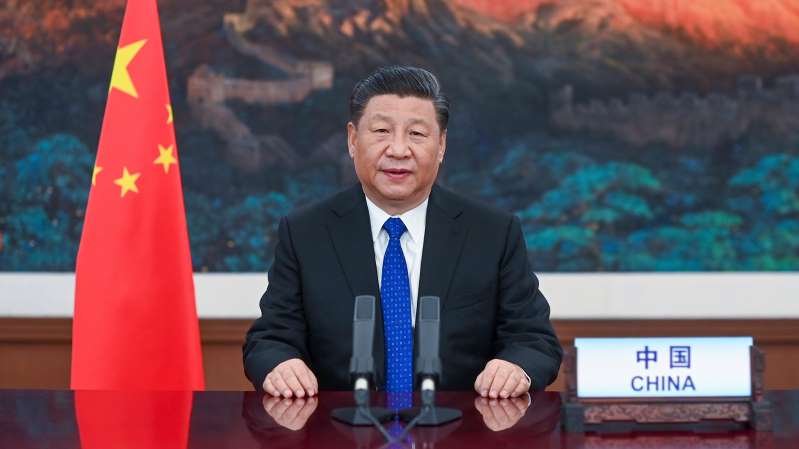 A meeting of the World Health Organization that was supposed to chart a path for the world to combat the coronavirus pandemic instead on Monday turned into a showcase for the escalating tensions between China and the United States over the virus.

President Xi Jinping of China announced at the start of the forum that Beijing would donate $2 billion toward fighting the coronavirus and dispatch doctors and medical supplies to Africa and other countries in the developing world.

The contribution, to be spent over two years, amounts to more than twice what the United States had been giving the global health agency before President Trump cut off American funding last month, and it could catapult China to the forefront of international efforts to contain a disease that has claimed at least 315,000 lives.

© Christopher Black/World Health Organization, via Agence France-Presse — Getty Images The W.H.O. Assembly in Geneva on Monday. It rejected an effort led by the United States to regain Taiwan admission to the assembly as an observer.

But it was also seen — particularly by American officials — as an attempt by China to forestall closer scrutiny of whether it hid information about the outbreak to the world.

Mr. Xi made his announcement by videoconference to the World Health Assembly, an annual decision-making meeting of the W.H.O. that is being conducted virtually this year because of safety considerations during the pandemic. Mr. Trump declined to address the two-day gathering, providing the Chinese president an opening to be one of the first world leaders to address the 194 member states.

© Anna Moneymaker/The New York Times President Trump on Sunday. He has questioned why China has paid much less to the World Health Organization than the United States has.

“In China, after making painstaking efforts and sacrifice, we have turned the tide on the virus and protected lives,” Mr. Xi said. “We have done everything in our power to support and assist countries in need.”

Late Monday, Mr. Trump responded in a scathing letter in which he accused the W.H.O. of an “alarming” dependence on China. In the letter, addressed to the W.H.O.’s director general, Dr. Tedros Adhanom Ghebreyesus, and posted on Twitter at 10:55 p.m., the president said, “It is clear the repeated missteps by you and your organization in responding to the pandemic have been extremely costly for the world.”

The four-page letter details Mr. Trump’s grievances against China and the W.H.O. over the pandemic and ends with a threat to permanently pull U.S. funding and revoke American membership in the organization if it does not “commit to substantive improvements within the next 30 days.”

Though the president did not specify the changes he was seeking, he said that “the only way forward for the World Health Organization is if it can actually demonstrate independence from China.”

Earlier, Trump administration officials denounced China’s aid announcement as an attempt to influence the W.H.O., which is facing pressure from member states to investigate whether it was complicit in Beijing’s lack of transparency in the early days of the outbreak in Wuhan.

China’s “commitment of $2 billion is a token to distract from calls from a growing number of nations demanding accountability for the Chinese government’s failure to meet its obligations under international health regulations to tell the truth and warn the world of what was coming,” John Ullyot, a spokesman for the National Security Council, said in a statement. “As the source of the outbreak, China has a special responsibility to pay more and to give more.”

Other world leaders, in their remarks to the assembly, criticized the lack of unity in fighting the pandemic and, without naming any one country, urged nations to set aside their differences.

“No country can solve this problem alone,” Chancellor Angela Merkel of Germany said. “We must work together.”

Dr. Tedros nodded to criticism of the organization’s own handling of the early weeks of the outbreak, saying the agency would review “lessons learned” about its global response.

But he did not address Mr. Trump’s insistence that the health agency investigate allegations widely dismissed by scientists that the coronavirus originated in a lab in China. Mr. Xi in his speech called for any examination to take place after the health crisis had subsided.

In recent weeks, Chinese leaders and citizens have become increasingly aware of the international criticism and open hostility over China’s initial handling of the outbreak. Top American officials have been scathing, but European leaders have also spoken of mysteries surrounding the outbreak in China that needed to be addressed.

China’s aggressive diplomacy and international anger over exports of Chinese-made medical equipment that turned out to be shoddy have also contributed to the rising tensions.

About 100 nations have called for an independent investigation into the origins of the pandemic.

Against that backdrop, and with the imminent start of the annual National People’s Congress in Beijing on Friday, Mr. Xi’s move appeared to be an effort to win over international support and calm the public anxieties in China.

“Certainly this is a very tricky moment for Xi,” said Dali L. Yang, a political scientist at the University of Chicago. “Clearly he doesn’t want this really to be hanging above him, given how many countries are engaged and have asked for an investigation into the origins of the virus.”

Mr. Trump’s retreat from the global stage has created openings for China, which has been seeking to reshape multilateral institutions long dominated by Washington.

Ryan Hass, a China scholar at the Brookings Institution, said a familiar pattern had emerged. “Whenever Trump withdraws the U.S. from international leadership, Xi announces that China will step forward,” said Mr. Hass, who was a senior Asia director on President Barack Obama’s National Security Council. “Xi has been ruthlessly opportunistic about seeking to exploit America’s withdrawal from global leadership for China’s advantage.”

Washington’s weak diplomatic hand was apparent on Monday when its efforts to lead a coalition of countries seeking to win Taiwan admission to the assembly as an observer failed. The self-governed island, which Beijing claims as its own territory, had observer status until 2016. Secretary of State Mike Pompeo and other top American officials had recently called on the W.H.O. and its members to re-establish Taiwan’s admission over Beijing’s objections.

Mr. Trump’s fury at the W.H.O., and his decision last month to freeze financial contributions to the group in the middle of a global pandemic, came as critics pointed to his own administration’s slow and bungled response to a pandemic that has infected nearly 1.5 million people in the United States and killed nearly 90,000.

To many of the president’s supporters, the W.H.O. and other international organizations are to blame for lost jobs, low wages and economic uncertainty in the United States. But Mr. Trump will need to convince a broad part of the electorate that he was not responsible for the deaths and massive economic calamity caused by the virus. Casting the W.H.O. and the Chinese government as enemies could be an effective way, at least in the eyes of his supporters, for Mr. Trump to blunt fierce criticism from Democrats over his failures on the pandemic.

“Why is it that China, for decades, and with a population much bigger than ours, is paying a tiny fraction of $’s to The World Health Organization, The United Nations and, worst of all, The World Trade Organization, where they are considered a so-called ‘developing country’ and are therefore given massive advantages over The United States, and everyone else?” Mr. Trump tweeted over the weekend.

Beijing contributed a total of $86 million to the W.H.O. in 2018 and 2019, indeed much less than Washington’s $893 million contribution over those two years.