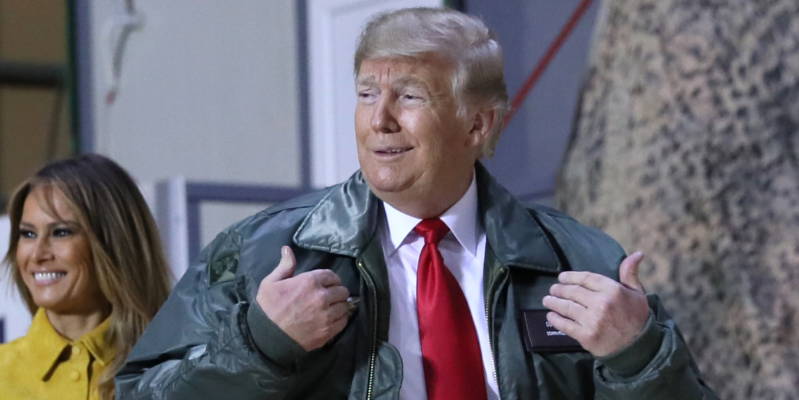 President Donald Trump on Wednesday threatened to dump thousands of ISIS prisoners in Europe if the countries they originated from refused to take them back in.

Speaking to reporters at the White House, Trump specifically mentioned France and Germany as two countries where its citizens who pledged their loyalty to ISIS could be dropped off.

“We’re holding thousands of ISIS fighters right now, and Europe has to take them,” Trump said. “If Europe doesn’t take them, I’ll have no choice but to release them into the countries from which they came, which is Germany and France and other places.”

Trump’s suggestion for the US to release the prisoners comes amid plans to reduce its 2,000 troops in Syria, stoking fears of a rekindling of the jihadist movement throughout the country and beyond and ultimately hurting the global fight against ISIS.

This leaves a precarious situation for the Syrian Democratic Forces, a US-backed Kurdish group that relies on the presence of US personnel – and has the responsibility of holding thousands of prisoners in makeshift facilities.

SDF is detaining the lion’s share of ISIS fighters. The SDF had detained 9,000 militants in Syria by April, according to US military officials. The military also estimated 1,000 of them hailed from 50 different countries.

A recent inspector general’s report from the Combined Joint Task Force – Operation Inherent Resolve noted that the reduction in US forces “reduced the ability of [the task force] to maintain ‘visibility'” at a refugee camp, which “created conditions that allow ISIS ideology to spread ‘uncontested.'”

US State Department counterterrorism coordinator Nathan Sales said the US was urging other nations to repatriate the ISIS fighters and prosecute them.

“Across the coalition, we need to prosecute ISIS leaders, fighters, financiers, and facilitators for the crimes they’ve committed,” Sales said earlier in August. “That includes building the law enforcement capacity of partner states that have the will to act but might lack the resources or expertise to do so. It also means repatriating and prosecuting foreign terrorist fighters.”

Around 1,050 Germans joined the Islamic State in the Middle East after 2013; and around 1,190 French citizens joined the group, according to Soufan Center, the global security non-profit group. Following the collapse of ISIS’ bastions in Iraq and Syria, dozens of these foreign nationals were either killed or captured by coalition forces – leaving many of the prisoner’s fates in limbo as their governments debate on their status.

In June, France passed legislation to repatriate French jihadists on a case-by-case basis – twelve French and two Dutch orphans whose parents were militants were transported to France. Germany also considered children as “victims” and has allowed them to be repatriated.