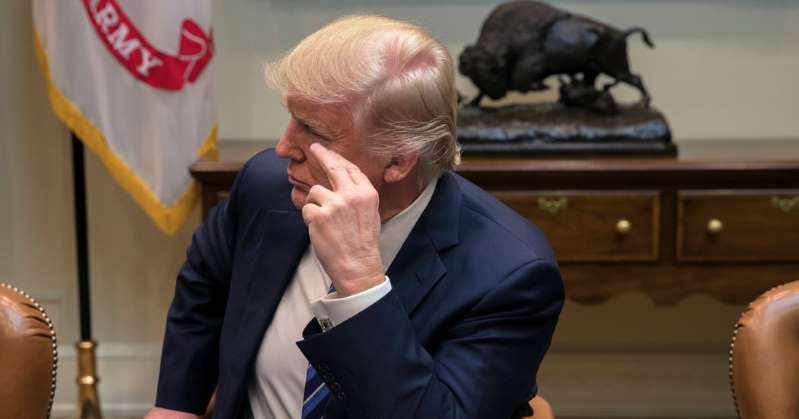 As President Trump prepares to kick off his bid for a second term this week, he is anxiously searching for a way to counter Democrats on health care, one of their central issues, even though many of his wary Republican allies would prefer he let it go for now.

Since he announced his previous run four years ago, Mr. Trump has promised to replace President Barack Obama’s health care law with “something terrific” that costs less and covers more without ever actually producing such a plan.

Now he is vowing to issue the plan within a month or two, reviving a campaign promise with broad consequences for next year’s contest. If he follows through, it could help shape a presidential race that Democrats would like to focus largely on health care.

While the president has acknowledged that no plan would be voted on in Congress until 2021, when he hopes to be in a second term with Republicans back in charge of the House, he is gambling that putting out a plan to be debated on the campaign trail will negate some of the advantage Democrats have on the issue.

But nervous Republicans worry that putting out a concrete plan with no chance of passage would only give the Democrats a target to pick apart over the next year. The hard economic reality of fashioning a plan that lives up to the promises Mr. Trump has made would invariably involve trade-offs unpopular with many voters.

“Obamacare has been a disaster,” Mr. Trump told ABC News in an interview aired on Sunday evening. His own plan, he insisted, would lower costs. “You’ll see that in a month when we introduce it. We’re going to have a plan. That’s subject to winning the House, Senate and presidency, which hopefully we’ll win all three. We’ll have phenomenal health care.”

The president’s renewed interest in health care comes as he plans an elaborate rally in Orlando, Fla., on Tuesday to open a re-election campaign that is already struggling to find its bearings. After last week’s leak of a series of dismal internal poll results from March showing him trailing in multiple battleground states, Mr. Trump first denied that the surveys even existed, only to have his campaign later confirm that they in fact were real.

By Sunday, the episode had led to a purge as the Trump campaign indicated that it would cut ties with three of its five pollsters, a sign of internal discord in an operation seeking to be far more organized and professional than the slapdash, one-man show that Mr. Trump ran out of Trump Tower in New York four years ago.

Democratic leaders have argued that they won control of the House in last year’s midterm elections in large part on the health care issue, and they have been pressing the point in recent weeks. Over the weekend, 140 House Democrats, more than half of the party’s caucus, held events or online town halls to talk about health care, their largest coordinated action in districts since winning the majority.

In particular, Democrats hammered the Trump administration for asking a court in March to overturn the entire Affordable Care Act, which among other things would eliminate protections for patients with pre-existing conditions. Mr. Trump has repeatedly said he favors such protections but has not explained how he would achieve them if the Obama-era law were invalidated.

“The Trump administration is currently suing to eliminate the law that guarantees health care coverage for Americans with pre-existing conditions,” said Representative Ted Lieu of California, a leader of the Democratic committee that organized the weekend activities. “That action speaks for itself. If Trump wants to be serious about health care, he needs to stop the lawsuit and his other actions that seek to sabotage the A.C.A.”

While House Democrats advance incremental measures on health care, some prominent liberals, including presidential candidates like Senator Bernie Sanders of Vermont, have proposed a single-payer government-run health care plan that they call “Medicare for all,” hoping to capitalize on the popularity of the program for the elderly by expanding it to the population at large.

© Tom Brenner for The New York Times Mr. Trump speaking about the Affordable Care Act. He has recently pushed the idea of voting to repeal the law again.

Mr. Trump and other Republicans see that as an opening for them on the campaign trail by characterizing it as socialism. Such a huge shift in how health care is run in the United States would not only put the government in charge, they say, but also cost enormous amounts of taxpayer money and force Americans to give up private insurance coverage they might like.

Mr. Sanders was pressed on those criticisms during an appearance on “Fox News Sunday”and argued that the current system was unsustainable, implicitly offering his own criticisms of the program erected by Mr. Obama from the left.

“You have a dysfunctional health care system,” he said. “You’ve got 70 million Americans who either have no health insurance or they are underinsured with high deductibles and co-payments. We are paying twice as much as any other country on earth for the prescription drugs that we need. We spend far more per capita on health care as do the people of any other country.”

Democrats enjoy a strong edge with voters on health care, with 40 percent trusting them on the issue, compared with 23 percent who trust Republicans more, according to an April poll by The Associated Press and the NORC Center for Public Affairs Research.

Forty-two percent of Americans in that survey favored a single-payer system along the lines of what Mr. Sanders is proposing, while 31 percent opposed it and 25 percent did not take a position. Views of the Affordable Care Act are split right down the middle, with 50 percent approving of it and 48 percent disapproving of it in an April poll by Gallup.

Given the Democratic advantage, many Republicans say they should not focus their energy on health care but instead emphasize immigration and other issues where they are stronger. But the president and his team counter that even if they cannot win on health care, it would be ridiculous to simply cede the territory if they could at least narrow the gap.

The president feels compelled to have something specific to counter Medicare for all. Still, people close to Mr. Trump suggested that if he did release something within a month or two, it might not be a comprehensive plan but a series of smaller proposals that would potentially help, such as ideas for bringing down prescription drug costs, for giving states more flexibility on Medicaid expansion and for promoting more access in the marketplace.

Among those who are said to be influencing the discussion within the administration are Alex M. Azar II, the secretary of health and human services; Seema Verma, the head of the agency that runs Medicare and Medicaid; and Joe Grogan, the director of the White House Domestic Policy Council.

“The president has repeatedly promised something better than the A.C.A. but has never come up with a plan himself, and the congressional plans he endorsed were definitely not better for everyone,” said Larry Levitt, a senior vice president at the Kaiser Family Foundation.

“There’s always a tension for presidents around whether to submit a specific proposal to Congress or let the legislative process play out,” Mr. Levitt added. “When it comes to health care, the challenge has been that the president has not only avoided proposing a specific plan, but has made promises that no plan could ever fulfill.”

Mr. Trump often laments the failure by blaming Senator John McCain, Republican of Arizona, who voted against one repeal effort in the summer of 2017. Even if Mr. McCain had voted for the bill, however, full repeal of the Affordable Care Act would not have been assured.

That version would have eliminated the individual and employers’ mandate, but left intact the health care law’s Medicaid expansion and insurance regulations. And it would still have required passage in the House or forced lawmakers from both chambers to negotiate their differences.

When Mr. Trump pushed the idea of voting to repeal the law again recently, he was quickly dissuaded by Senator Mitch McConnell, Republican of Kentucky and the majority leader, who argued that comprehensive health care legislation would go nowhere in Congress. The president then insisted it was never his intention to vote on a bill before the 2020 election.

Even as Mr. Trump has delayed producing a plan, he has continued to criticize the existing health care law, repeatedlyclaiming that it had become unaffordable because of average deductibles exceeding $7,000 or $8,000. This was an exaggeration.

Deductibles vary greatly by the type of plan and the enrollee. While deductibles for some plans can top $7,000, they average $4,375 for silver-tier plans, the most common choice for consumers. And those who receive cost-sharing reductions have lower deductibles still. Also left unsaid was his own administration’s role in causing higher deductibles, as the federal government sets caps on out-of-pocket costs and has increased the limit this year.

Midway through his third year in office, many remain skeptical that Mr. Trump will produce the plan he is now promising to unveil in a month or two.

“He can’t deliver the impossible,” said Len M. Nichols, the director of the Center for Health Policy Research and Ethics at George Mason University, “so he avoids specifics and postpones actually reckoning with a serious legislative proposal of his own.”