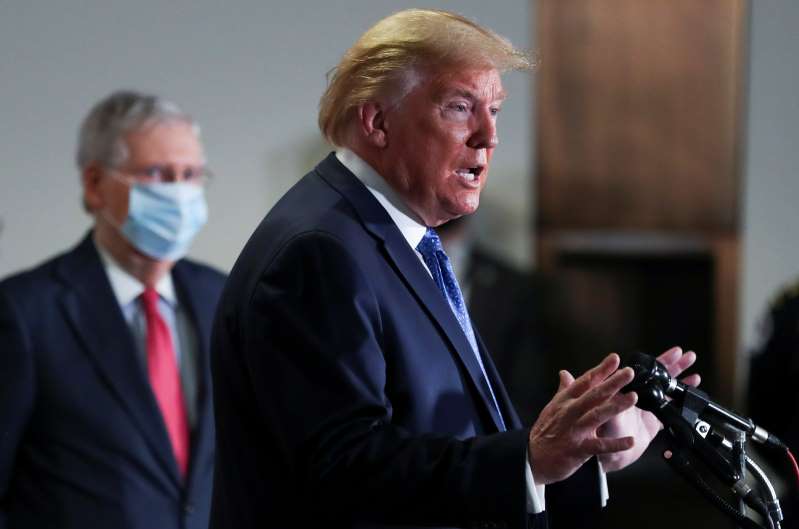 President Trump on Tuesday privately expressed opposition to extending a weekly $600 boost in unemployment insurance for laid-off workers affected by the coronavirus pandemic, according to three officials familiar with his remarks during a closed-door lunch with Republican senators on Capitol Hill.

The increased unemployment benefits — paid by the federal government but administered through individual states — were enacted this year as part of a broader $2 trillion relief package passed by Congress. The boost expires this summer, and House Democrats have proposed extending the aid through January 2021.

But congressional Republicans have said they are concerned that some workers are making more money on unemployment insurance than if they were on a payroll and therefore have less incentive to return to work or find a new job.

“You can extend some assistance, but you don’t want to pay people more unemployed than they’d make working. You should never make more than your actual wages,” said Sen. Lindsey O. Graham (R-S.C.), who said he raised the issue with Trump during the lunch. While Trump did not explicitly say he would not sign another bill if it contained a benefit boost, Graham said “he agrees that that is hurting the economic recovery.”

Many economists fear cutting off the benefit extension could hamper the economic recovery. Government spending on unemployment benefits rose by $45 billion from February to April, offsetting slightly more than half of the decline in private wages and salary, according to a recent study by the Brookings Institution. Republicans have maintained that the higher benefit will give workers an incentive to stay at home rather than go to work, but eliminating the massive cash infusion could further depress demand amid fears consumers are already cutting back dramatically on spending.

Trump’s advisers have expressed confidence the economy will quickly recover, a view at odds with many economists.

At the lunch, Trump also implored Senate Republicans to take their time on the next phase of coronavirus legislation to get it right — according to the officials, who spoke on the condition of anonymity to discuss a private conversation — mirroring the strategy of senior Republican leaders who have argued that lawmakers should hit pause before passing another massive rescue package.

“There may be some more needs out there,” Sen. Kevin Cramer (R-N.D.) told reporters following the lunch. “After we get back, and after the next week when we get back, we’ll take a look and see what we can, and keep focused on the things that are necessary and helpful.”

The unemployment benefits weren’t the only provisions pushed by Democrats that Trump signaled opposition to during the lunch with GOP senators. The president, a vocal critic of voting by mail, also objected to language in the House Democratic plan passed last week that expands voting options ahead of the November elections, including mail-in balloting, according to two of the officials.

Despite being a critic of the practice, Trump — who is now registered to vote in Florida — has voted by mail, including in 2018 and earlier this year.

Jeff Stein contributed to this report.