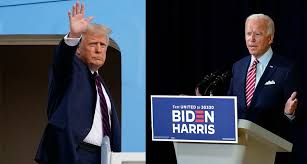 In responses to a questionnaire compiled by the Military Officers Association of America, the presidential candidates promised a strong focus on military and veterans issues but varied approaches on their goals of helping troops and their families.

The statements — from President Donald Trump, Democratic Party nominee Joe Biden and Libertarian Party nominee Jo Jorgensen — offer the most detailed insight so far from the campaigns’ plans for the Departments of Defense and Veterans Affairs.

Trump’s answers largely center around his past claims that he has “rebuilt the military” in less than four years in office, putting the country on stronger national footing. Biden, who served as vice president under Barack Obama, attacks Trump as more focused on inflated spending than actual security policy, and promises a more focused and effective approach.

MOAA officials, who made the candidate responses public on Wednesday, said they reached out to the campaigns to provide non-partisan but highly focused answers on questions related to the military community. The organization describes itself as “the nation’s largest and most influential association of military officers.”

“We wanted to go beyond the soundbites for our membership,” said retired Col. Dan Merry, vice president of government relations for MOAA. “When candidates discuss military and veteran issues on the campaign trail they hit the high notes and play to a wide audience. Our members have a deeper understanding, and a much deeper involvement, with these topics.”

Jorgensen, who has also run as her party’s vice presidential nominee in past election cycles, advocates for significant upheaval in defense and VA programs. She calls for significant decreases in military funding and wholesale dismantling of VA operations, to be replaced with vouchers for veterans to receive care.

The two major party candidates offer less radical but still contrasting approaches on a host of Pentagon and VA plans. Here’s a look at some of the key differences:

In the candidate questionnaire, both Trump highlighted three years of defense spending increases as evidence of his commitment to national security.

“Our military, quite frankly, was very depleted and the Obama-Biden administration failed to give our military forces what they needed,” the president wrote. “Within three years of record military investment, our country has rejected a future of American decline and embraced our destiny of American dominance.”

Echoing his past comments about NATO, Trump said that America’s allies “must step up to the plate and fulfill their end of the bargain so that America can focus our resources on challenges abroad and at home.”

In contrast, Biden pledged to “maintain our (military) superiority,” but added that “we must do so affordably.” He accused Trump of wasting money on “aging legacy capabilities” and not smarter investments such as unmanned vehicles and artificial intelligence systems.

“And we have to invest in our other elements of national power,” the former vice president wrote. “Our military is one tool in our toolbox. We have become over-dependent on the military to advance our security interests overseas and underinvested in other tools including diplomacy, economic power, education, and science and technology.”

Biden also noted that “we do not need large deployments of combat forces to maintain our security” and promised a full review of American overseas presence, something which Trump has also focused on in his term of office.

Both candidates promised to maintain strong military pay, but Biden accused Trump of shortchanging the federal workforce as a whole on pay equity with private sector cost of living. He pledged to provide an additional allowance for military families living at or below the poverty line, a policy which the current administration has opposed.

Trump noted that under his administration, troops saw their largest pay raise in a decade. He also pledged to improve privatized military housing after several years of scandal regarding sub-par living conditions for some families.

“Military spouses help carry families through frequent moves and long deployments,” he wrote. “They uplift communities, care for fellow military families, and sustain service members through their most difficult battles.”

Trump has made veterans programs a cornerstone of his re-election campaign, touting passage of the Mission Act — “enabling veterans in the VA to receive care in the private community whenever it’s in their best interest” — and plans underway to unify the Defense Department and VA electronic medical records.

“I have also strengthened the VA’s hospital system,” he wrote. “As policymakers across the spectrum realize, the VA also needs to be the right size to address veteran needs in the future, focusing resources on the areas where its impact can be greatest.”

Biden said he’ll make expanded care and benefits for illnesses related to burn pit exposure a priority of his administration, saying “we must never again have an Agent Orange-like crisis.”

He also promised to “strike the right balance between VA and community care, but do it in a timely, responsible, and accountable way for our veterans.” Critics have attacked Trump for outsourcing too much of VA medical care to private-sector hospitals and clinics.

Biden also pledged to “take seriously the crises of veteran suicide and homelessness.” The latter saw dramatic improvements during Obama’s term in office, with the number of homeless veterans decreasing by half from 2010 to 2016. The suicide rate among veterans has remained steady since reliable tracking began during Obama’s presidency, despite efforts from him and Trump to address the issue.

Recruiting and the draft

Asked about the challenges of convincing Americans to sign up for military service, Trump stated that “the best recruitment tool for an all-volunteer force is a well-transitioned veteran.”

He said investments in military readiness will help make the service more attractive, but his administration’s initiatives to give separating service members more assistance in their first year after the military is key to maintaining a healthy fighting force.

Trump has pushed for military end strength increases in recent years, but Biden argued that the United States “does not need a larger military.” He said he wants targeted recruiting efforts for women, minorities and highly-skilled individuals.

The former vice president also vowed that he would “ensure that women are also eligible to register for the Selective Service System, so that men and women are treated equally in the event of future conflicts.” Trump has opposed that idea.

The full candidate questionnaire is available on the MOAA website.

Leo covers Congress, Veterans Affairs and the White House for Military Times. He has covered Washington, D.C. since 2004, focusing on military personnel and veterans policies. His work has earned numerous honors, including a 2009 Polk award, a 2010 National Headliner Award, the IAVA Leadership in Journalism award and the VFW News Media award.