Skip to content
Home » U.S. Politics » Time to Reorganize the Pentagon
Previous Next

Time to Reorganize the Pentagon 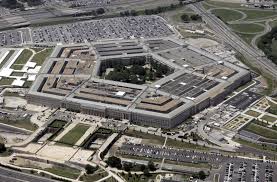 As the country enters the 2020 presidential election one of the most significant issues threatening the security of the nation has rarely been discussed by the Democratic candidates vying to unseat President Trump as President and that is the national debt currently pegged at close to $23 trillion.

In fairness to the Democratic candidates, neither President Trump nor Republican’s in Congress had made much of an effort to reverse this trajectory of this looming threat to the nation’s security.

In the months leading up to the 2016 presidential election various prominent national security figures who served in both Democratic and Republican administrations formed a bipartisan group imploring U.S. lawmakers to address the unsustainable and rapidly increasing national debt.

The various national security experts issued a statement: “As individuals who have served the nation in both international and domestic leadership roles, we continue to believe that our long-term debt is the single greatest threat to our national security.”

American history is littered with examples of presidents from both parties who have spoken about reforming the Pentagon, with former Secretary of Defense Robert Gates laminating his biggest regret of not being able to reform the massive Pentagon bureaucracy.

Gates mentioned the complex bureaucratic maze of political interests with its entrenched political constituency who advocate for every defense program as vital to U.S. national security

In his final days, President Eisenhower gave his famous farewell address urging the nation to “guard against the acquisition of unwarranted influence, whether sought or unsought, by the military-industrial complex. The potential for the disastrous rise of misplaced power exists and will persist.”  In the proceeding decades the U.S. has consistently failed to address the antiquated procurement and acquisition of the Pentagon budgetary system.

Eisenhower was referencing military leaders who always seek the latest weapons program without contemplating future threats to the United States.  Anthony Cordesman of the Center for Strategic & International Studies also cautions defense leaders base their budget decisions on what’s best for their particular branch of service instead of tying requests to the current national security strategy.

Far too often missing in this debate is how political leaders use the Pentagon as a job creation program for their states or districts, Democrats often want a leaner Defense department and want weapons systems reduced except when it falls it targets their state or district.

Over the decades the Pentagon has cancelled various weapons programs because of advent failures.  Lieutenant Colonel Daniel Davis penned an article in Armed Forces Journal, titled “Purge the Generals,” focused precisely on this.

Mentioned in the article are few Pentagon weapons failures:

This systematic problem at that Pentagon with regard to weapons failures is not just confined just to the Army; each military branch faces this problem of expending resources and failing to deliver the desired results.

The Marine Corps by order of the Defense Department in 2011 cancelled the Marine Corps’ expeditionary fighting vehicle after spending $3 billion.  The Navy’s Littoral Combat Ship, which was designed to protect coastal regions, has had a slew of cost overruns.

After 16 years and costing $30 billion with each ship costing 250% more than was originally proposed, even after becoming operational a decade ago the ships have experience numerous technical issues that the Department of the Navy doesn’t deem them ready for service in the Gulf which was its primary mission.

The public needs to understand how utterly broken the Department of Defense procurement and acquisition system is, just check out Lockheed Martin Corp.’s F-35 jet, the costliest fighter ever with a production cost of over $1.5 Trillion over its 55 year lifespan.  This cost keeps rising!

Far too often blame is placed on the Pentagon who always want the next new weapons system but equal share must be shared with politician s of both political parties for the for the bloated defense budget.

In 2013, then -Army Chief of Staff Gen. Ray Odierno testifying before Congress stating the Army had no use for additional M-1 Abrams tanks. Against Odierno’s request Congress approved $436 million for the construction and maintenance of Abrams tanks, if appropriated correctly would have gone to more pressing defense needs.

Unfortunately for the U.S. and the Army, only one area of the country which produces the tank and that is at the Army Tank Plant in Lima, Ohio, with Lawmakers from both political parties Ohio lawmakers, such as Democratic Senator Sherrod Brown and Republican Senator Rob Portman, as well as from Republican Representative Jim Jordan.

Again what politician wants to eliminate jobs in a crucial swing state as Ohio and lose 16,000 jobs, Congress always seems state this is protecting national security, and this is not the only example. The list abounds of this type of appropriation by Congress.

Even former President Barack Obama’s Defense Secretary Leon Panetta testified before a Congressional committee as he warned Congress it would be dangerously shortsighted to think the nation’s debt can be reduced on the back of the Pentagon without looking at the rest of the federal budget, especially entitlement spending as the Congressional Budget Office (CBO) amounts to close to 70% of the federal debt.

The time has come to instituting a 21st century reform that encompasses all federal spending and that includes overhauling the antiquated acquisition and procurement of the Department of Defense.

The nation’s national security depends on it!