Skip to content
Home » U.S. Politics » ‘there’s No Model for this’: Impeachment Timeline Crashes into Democratic Primary
Previous Next

‘there’s No Model for this’: Impeachment Timeline Crashes into Democratic Primary 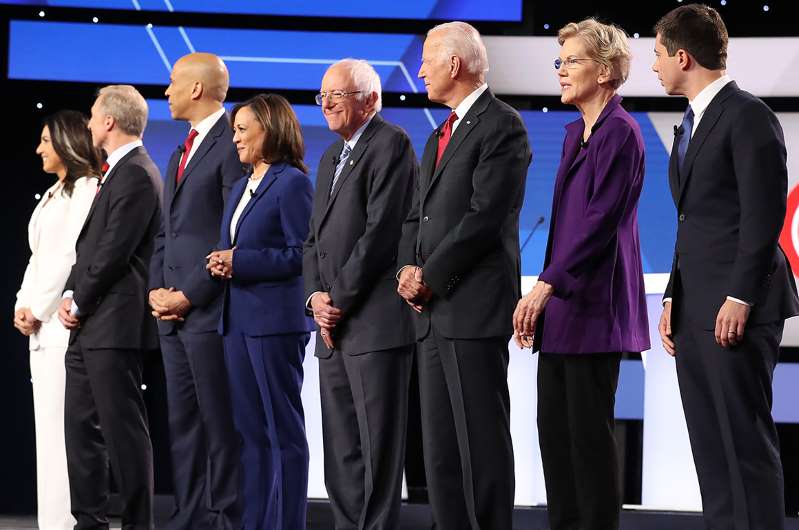 On its current path, the impeachment case against President Trump is on a collision course with perhaps the most pivotal period in the Democratic primary, threatening to unravel the campaign plans of some of the top 2020 contenders.

The House is unlikely to vote on impeachment until the end of the year, meaning the Senate trial against Trump figures to begin in January — just weeks before the Feb. 3 Iowa caucuses. It’s an event that could require the six Democratic presidential prospects to remain in Washington every workday for at least a month.

Depending on when the trial begins, or if it drags on, the trial could affect the New Hampshire primary on Feb. 11, a day shy of the 21th anniversary of President Clinton’s acquittal after a five-week Senate trial.

There’s no consensus over which Democratic contenders are advantaged by an impeachment trial. Candidates such as Joe Biden or Pete Buttigieg won’t be chained to senatorial desks, leaving them to stump unfettered in the two early states. But the six senators — Michael Bennet, Cory Booker, Kamala Harris, Amy Klobuchar, Bernie Sanders, and Elizabeth Warren — will occupy the national spotlight as jurors, located at the center of the political universe of impeachment.

“We’re in uncharted waters. There’s no model for this,” said Joel Benenson, an advisor to Buttigieg and alum of Hillary Clinton’s and Barack Obama’s presidential campaigns. “We’ve never seen an impeachment trial in a presidential election year ever, let alone multiple senators running for president.”

Aside from being away from the campaign trail during the trial, the senators would face an additional potential burden: they wouldn’t be allowed to speak publicly on the matter in chambers during the weeks-long trial because they’re supposed to sit as silent jurors — a rare restriction for politicians accustomed to using congressional hearings as opportunities to grandstand or create a viral moment. They could comment during breaks outside of the Senate chamber, however.

The complexities of a Senate trial and its effects on the Democratic primary are only now being discussed in earnest in top Democratic circles. The conversation came into sharp focus after Thursday’s House vote ratified the impeachment process that, if all goes the way House leadership hopes, would end by the holiday season, with Hanukkah starting Dec. 22. That would put a Senate trial as the first and only order of constitutional business to start the new year.

Privately, advisors for Biden and Buttigieg think the calendar inures to their candidates’ benefits but say they’re not making concrete plans to capitalize on the situation because it’s so far out. For Biden, the frontrunner in most polls who has watched Warren gain on him in early states, the less of Warren on the trail the better.

“We’re just going to run our race,” a Biden advisor said. “And if Bernie or Warren have to be in Washington while we’re in Dubuque, that’s their problem.”

Sen. John Kennedy, a Louisiana Republican, speculated this week that House Democrats had expressly designed the impeachment timeline to give Biden a leg up on his competition. A Senate trial that begins in January, he said, advances Biden’s interests above all.

“What does that mean if we get [the articles of impeachment] in January? You know who gets screwed? Every senator running for president of the United States because they’re going to be here — have to be here — every day at 12:30 six days a week with the primary starting in January,” Kennedy said.

“I’m telling you it happened real fast and my first thought was, ‘Who does this help and who does it hurt?’” Kennedy said, later answering that he believed it was designed to help Biden.

Though it’s less likely, the Senate trial could even stretch past New Hampshire and affect the Nevada Democratic caucuses on Feb. 22. South Carolina’s primary is Feb. 29.

But the candidates don’t have to be on the campaign trail every day to remain relevant, said Sean Bagniewski, chairman of the Polk County Democratic Party in Iowa. If they can get in Iowans living room daily by way of TV coverage of impeachment, it could be a net plus.

“It’s a big risk,” Bagniewski said. “But It’s just as likely that all eyes, all attention, stories are on Washington and the senators and the national message. In that case, the senators do better.”

Bagniewski said that in the final weeks of the caucus, the weekends are crucial. So the Senate candidates can be in Washington during the work week and fly out to weekend events.

One complicating factor for Biden is the role of his son Hunter, since Hunter and Joe Biden have been at the center of the impeachment case against Trump ever since news broke Sept. 20 that the president may have improperly tried to withhold military aid from Ukraine if it didn’t open an election-year investigation into the Bidens.

Republicans are trying to have Hunter Biden called as a witness in the case. Trump’s top surrogate in the House, Florida Rep. Matt Gaetz, said Hunter Biden should testify about his business dealings in Ukraine that have interested the president. But, because House rules would require de facto approval of the majority party — in contrast to the rules during Clinton’s impeachment — Gaetz said it would likely have to happen in the Senate during Trump’s trial if and when he’s impeached.

“You’ll have to ask Lindsey Graham,” Gaetz said of the chair of the Senate Judiciary Committee in response to a question about whether Hunter Biden would testify.

Asked if he made the request of Graham, Gaetz confirmed that he had, but said he couldn’t get a read on whether Hunter Biden would be called.

“He was not in a particularly sharing mood,” Gaetz said.

In response to a question about Hunter Biden testifying, Graham said, “I think somebody needs to look at that. I want to hear from [Department of Justice Inspector General Michael] Horowitz. We’ll go from there.”

A former advisor to Clinton during his impeachment, James Carville, said Republicans are sweating about the impeachment more than Democrats because it exposes their vulnerable senators to supporting an unpopular president in an election year. Also, every day that Democrats talk about allegations of corruption and abuse of power by Trump is a day that the president is unable to put forward a positive message.

“Yes, impeachment’s a pain in the ass,” Carville said. “But it’s more of a pain for Republicans than us.”

To that end, Senate Majority Leader Mitch McConnell wants to find a way to shorten the trial or get it over with as soon as possible. Some conservatives insist that an impeachment trial can be ended with a simple motion to dismiss, but McConnell has downplayed the idea. Senate Minority Leader Chuck Schumer said he and McConnell have yet to discuss impeachment rules.

Though Republicans and Democratic senators running for president have indicated they want the impeachment trial ended quickly, there’s a move by Democrats and critics of Trump to add non-Ukraine-related issues to the articles of impeachment to be approved by the House, which could lengthen the period of the trial.

Phillippe Reines, an advisor to Hillary Clinton, said the candidates shouldn’t worry about that and suggested senators like Warren – who first called for the impeachment of Trump after the release of Special Counsel Robert Mueller’s report — could even consider skipping the trial altogether.

“As long as Warren says she’s voting to convict why would any primary voter care? I’d tell her to say, ‘I could have said — and did say — six months ago that I’d vote to convict. I’m ready to vote right now. I’m not the one who needs to be convinced,’” Reines said. “She’d face media guff for not taking her duties as solemnly as she should, but so what? I mean, I could also make the argument that Biden and Buttigieg will have to be very mindful of what they’re doing during the trial. They can’t necessarily be keeping the same exact type of schedule and events. They aren’t senators but they can’t be tone deaf.”

The question of what tone Democratic presidential candidates need to adopt is no small matter given the stakes. An impeachment trial during the early state primaries might not only affect where the candidates go, it could rejigger their calculus on how and what they advertise.

“You’d be out of your mind to pay to talk about impeachment when the media is more than happy to allow you to do it all day every day for free,” Todd Harris, an advisor to Republican Sen. Joni Ernst of Iowa, said of how Democrats deploy their ad money.

“My guess is that smart candidates will be using their ad dollars to talk about policy issues that fire up the Democrat base because they don’t want their campaigns to be defined solely by impeachment.”

Burgess Everett contributed to this report.

CORRECTION: This story has been corrected to accurately reflect the date of President Clinton’s acquittal in the Senate.